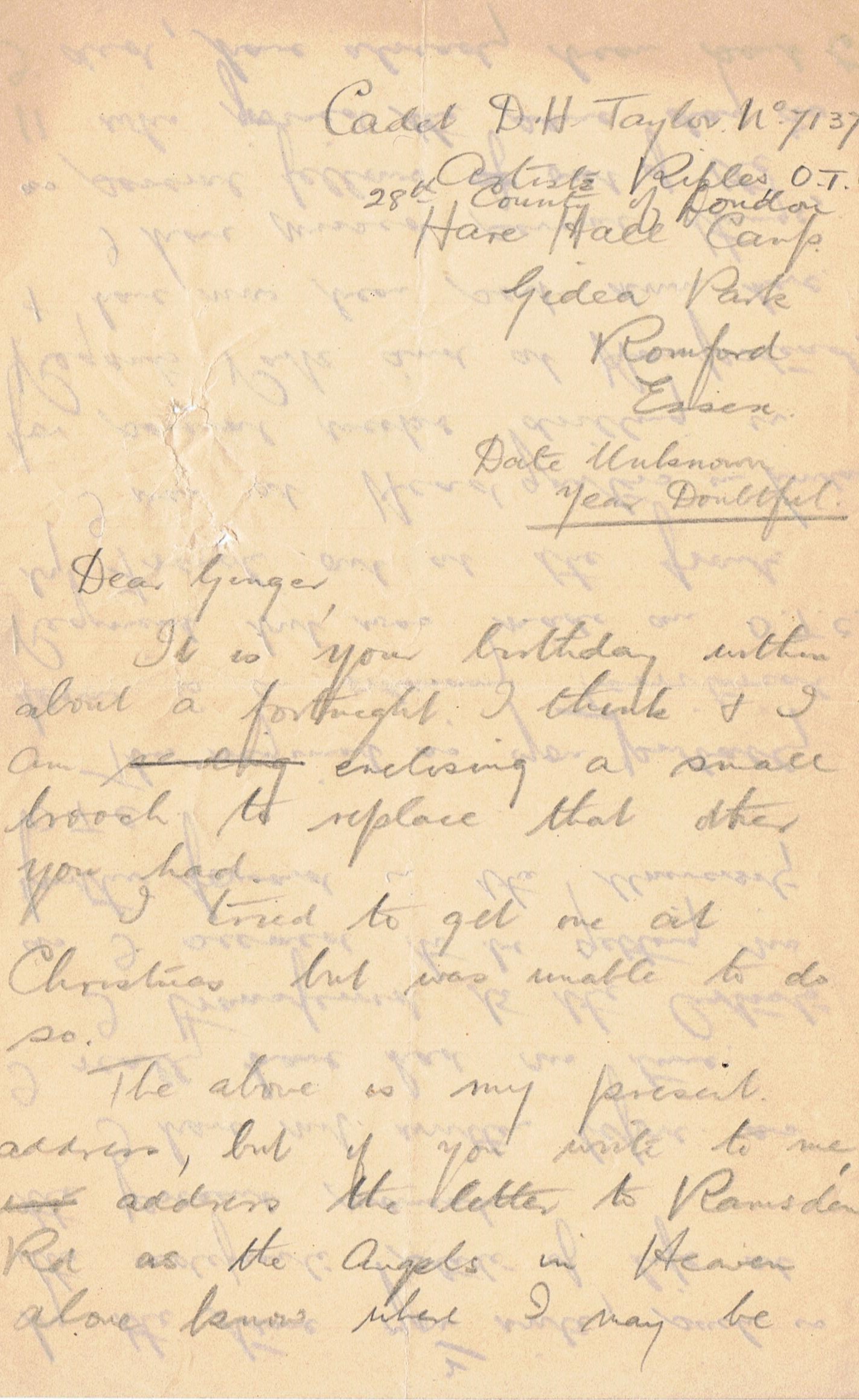 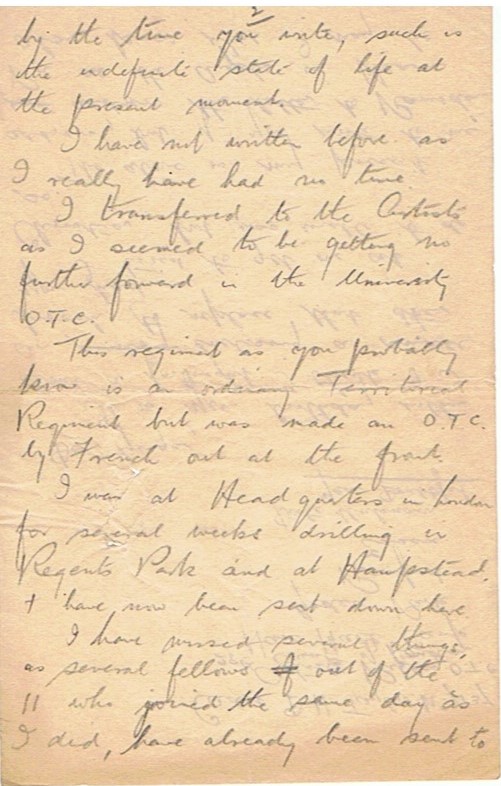 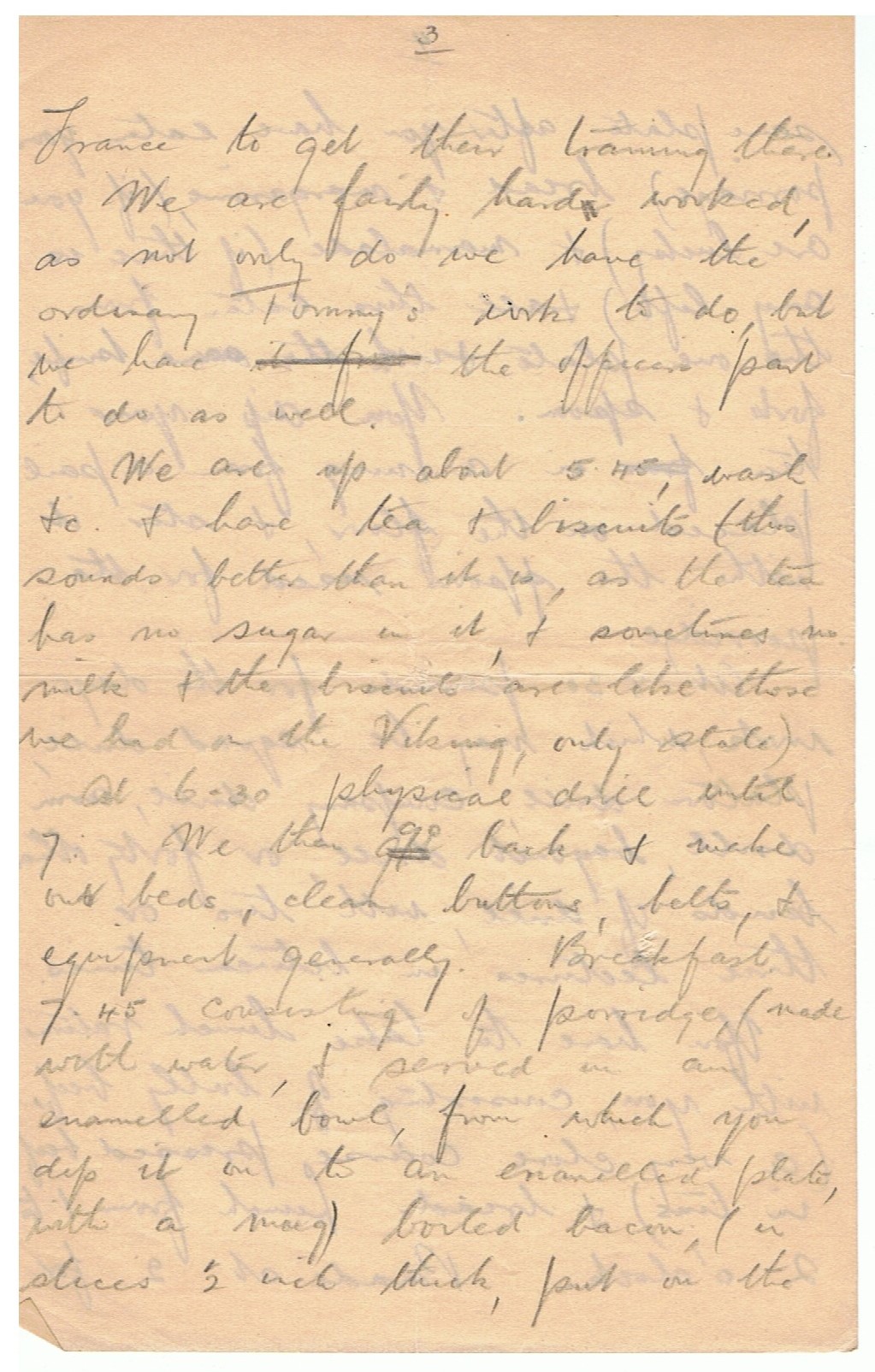 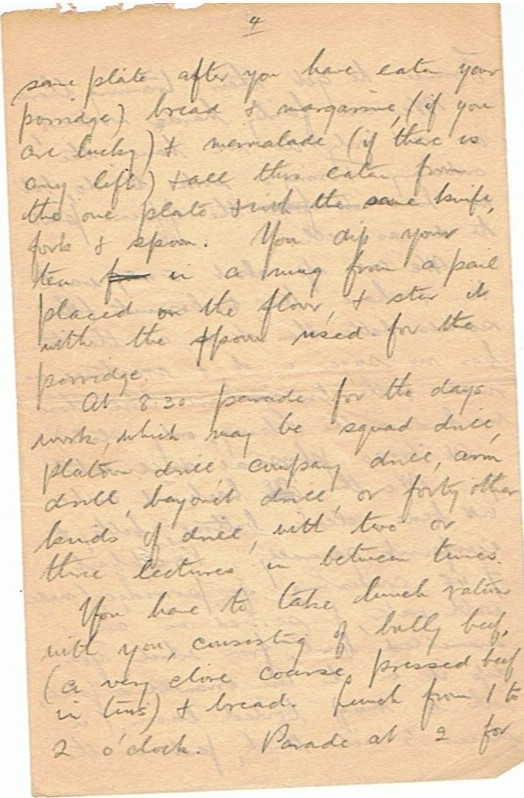 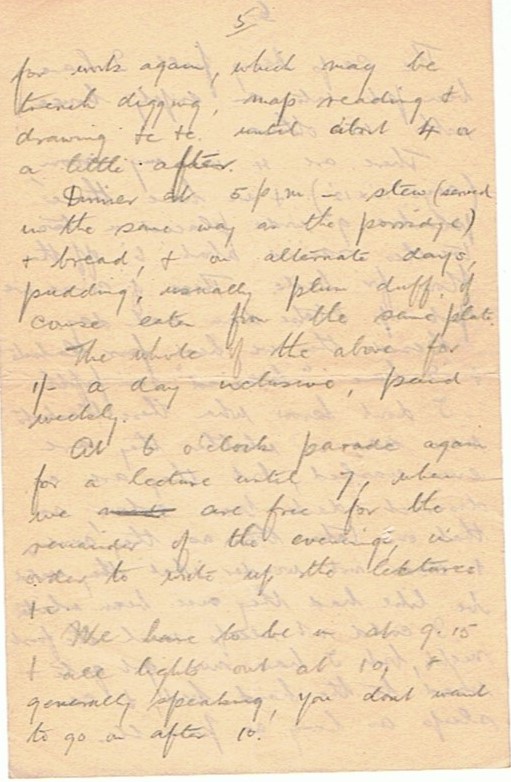 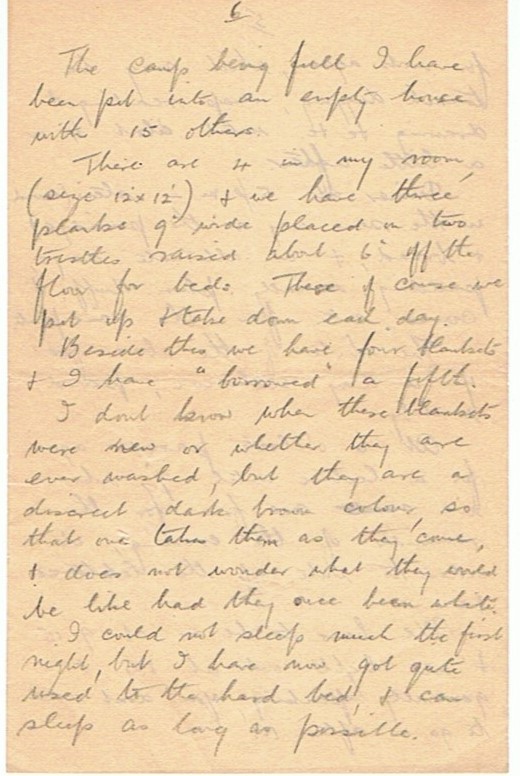 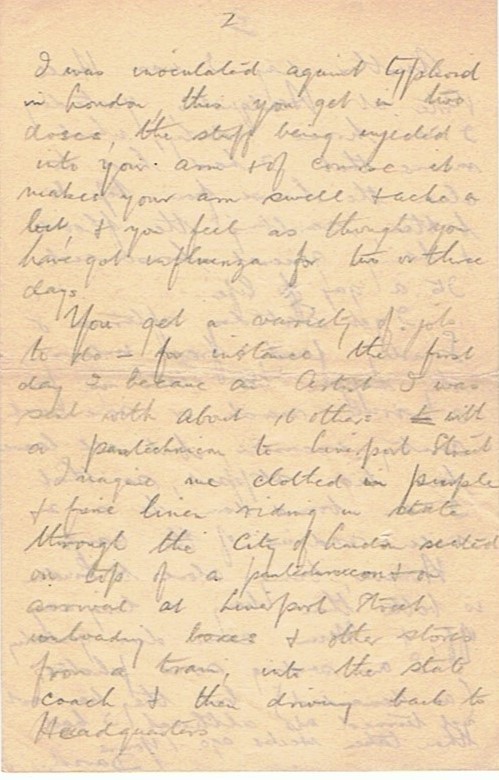 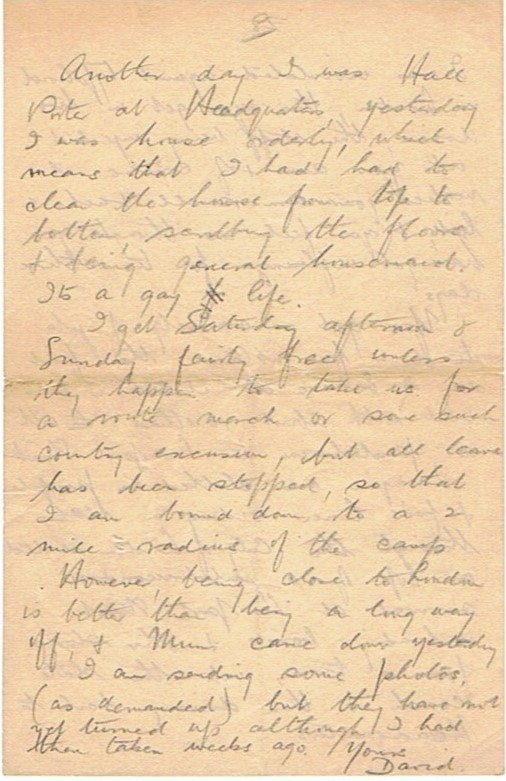 It is your birthday within a fortnight I think and I am enclosing a small brooch to replace that other you had.

The above is my present address, but if you write to me, address the letter to Ramsden Rd as the Angels in heaven above know where I may be by the time you write, such is the indefinite state of life at the present moment.

I have not written before as I really have had no time.

I transferred to the Artists as I seemed to be getting no further forward in the University O.T.C.

This regiment as you probably know is an ordinary Territorial Regiment but was made an O.T.C. by French out at the front.

I was at Headquarters in London for several weeks drilling in Regents Park and at Hampstead, and have now been sent down here.

I have missed several things, as several fellows out of the 11 who joined the same day as I did, have already been sent to France to get their training there.

We are fairly hard worked, as not only do we have the ordinary Tommy’s work to do, but we have the officers part to do as well.

We are up about 5.45, wash etc and have tea and biscuits (this sounds better than it is, as the tea has no sugar in it, and sometimes no milk and the biscuits are like those on the Viking, only stale).

At 6.30 physical drill until 7. We then go back and make our beds, clean buttons, belts and equipment generally. Breakfast 7.45 consisting of porridge (made with water and served in an enamelled bowl, from which you dip it on to an enamelled plate, with a mug), boiled bacon (in slices ½ inch thick, put on the same plate after you have eaten your porridge), bread and margarine (if you are lucky) and marmalade (if there is any left), and all this eaten from the one plate with the same knife, fork and spoon. You dip your tea in a mug from a pail placed on the floor, and stir it with the spoon used for the porridge.

At 8.30 parade for the days work, which may be squad drill, platoon drill, company drill, or forty other kinds of drill, with two or three lectures in between times.

You have to take lunch rations with you, consisting of bully beef ( a very close course pressed beef in tins) and bread. Lunch from 1 to 2 o’clock. Parade at 2 for work again, which may be trench digging, map reading and drawing etc etc until about 4 or a little after.

Dinner at 5 pm – stew (served in the same way as the porridge) and bread, and on alternate days, pudding, usually plum duff, of course eaten from the same plate.

The whole of the above for 1/- a day inclusive, paid weekly.

At 6 o’clock parade again for a lecture until 7, when we are free for the remainder of the evening in order to write up lectures etc.

The camp being full I have been put into en empty house with 15 others.

There are 4 in my room (size 12’ x 12’) and we have three planks 9” wide placed on two trestles raised about 6” off the floor for beds. These of course we put up and take down each day.

Beside this we have four blankets and I have “borrowed” a fifth.

I don’t know when these blankets were new or whether they are ever washed, but they are a discreet dark brown colour, so that one takes them as they come, and does not wonder what they would be like had they once been white.

I could not sleep much the first night, but I have now got quite used to the hard bed, and can sleep as long as possible.

I was inoculated against typhoid in London, this you get in tow doses, the stuff being injected into your arm and of course it makes your arm swell and ache a bit, and you feel as though you have got influenza for two or three days.

You get a variety of jobs to do – for instance the first day I became an Artist I was sent with about 16 others with a pantechnican to Liverpool Street.

Imagine one clothed in purple and fine linen riding in state through the City of London seated on top of a pantechnican and on arrival at Liverpool Street unloading boxes and other stores from a train, into the state coach and then driving back to Headquarters.

Another day I was Hall Porter at headquarters, yesterday I was house orderly, which means that I had had to clean the house from top to bottom, scrubbing the floor and being general housemaid. Its a gay life.

I get Saturday afternoon and Sunday fairly free unless they happen to take us for a route march or some such country excursion, but all leave has been stopped, so that I am bound down to a 2 mile radius of the camp.

However, being close to London is better than being a long way off, and Mum came down yesterday.

I am sending some photos (as demanded) but they have not yet turned up although I had them taken weeks ago.