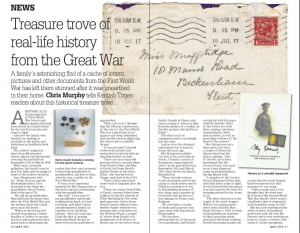 The origin of the word ‘bangers’

The origin of the word ‘bangers’ (exploding sausages)

[exploding sausage] previously thought to have come in to use in World War Two, possibly as early as 1919 [see Oxford English Dictionary and Wikipedia].

In a letter written from Holtzminden Prisoner of War camp from David Henry Taylor, 2nd Lieutenant in the Kings Royal Rifles, to his fiancée May Muggeridge in Beckenham, dated 18th October 1918, he says:
“Talking about cooking (you mentioned it in one of your letters) sausages form one of the stable items of diet here (everybody, the Red Cross, Stores, everyone sends sausages) & as you know these things when frying are apt to burst & the fact of them being tinned seems to make them especially explosive, so that the elite here politely refer to them as “bangers”. This is the sort of thing that happens – there will be a crowd round a stove & somebody in the middle cooking sausages. Suddenly there is a report as one of the “bangers” explodes blowing off a red hot piece into the next man’s (usually a Major’s) face or neck (in the nature of things it always lands on some uncovered part) who immediately yells, upsets his porridge, stew, or whatever he happens to be stirring, into the sausages & then calls down the Wrath of Heaven on the sausage owner & all his ancestors, describing them luridly & minutely. Will you please tell Mum that the last Red Cross parcel was worse than any before it had only a small tin of corned beef, an army ration which is nearly all vegetable (although quite good of its kind) & no milk nor “grease” of any kind nor sugar.”

The archive, comprising nearly 600 letters, photos and documents, has been reproduced in a 528 page hardback book with the title “My Dearest” [subtitle: A War story, a love story, a true story of WW1 by those who lived it], published by Property People JV Ltd.