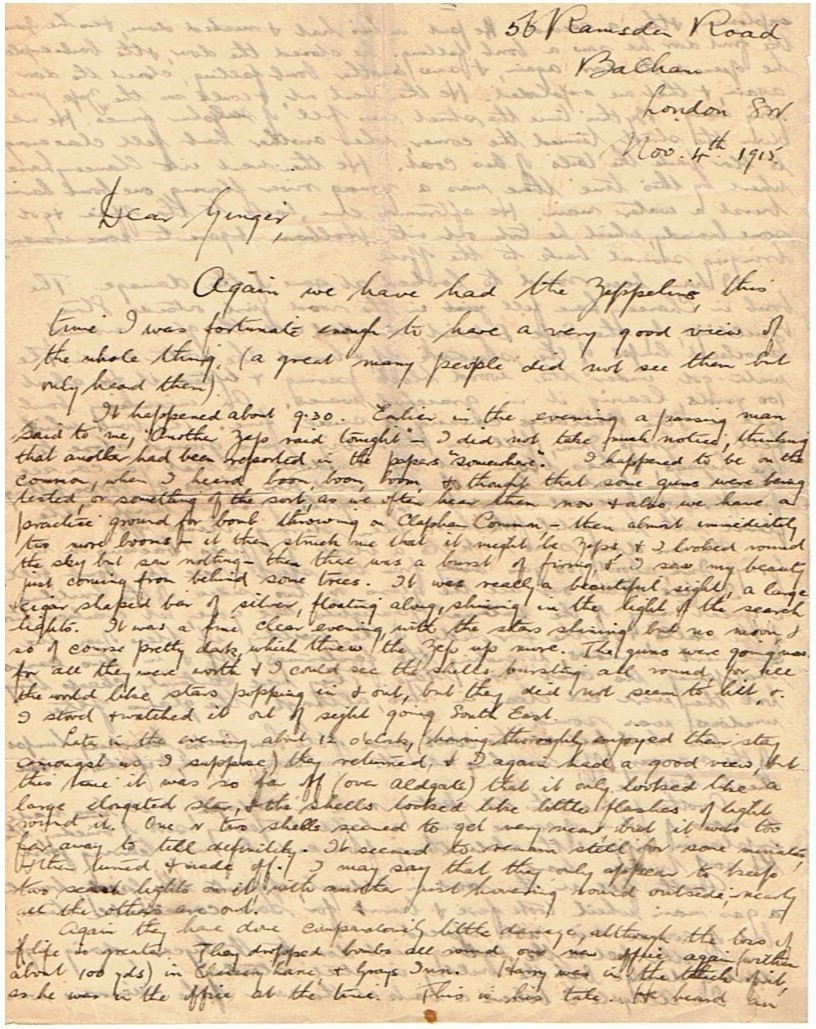 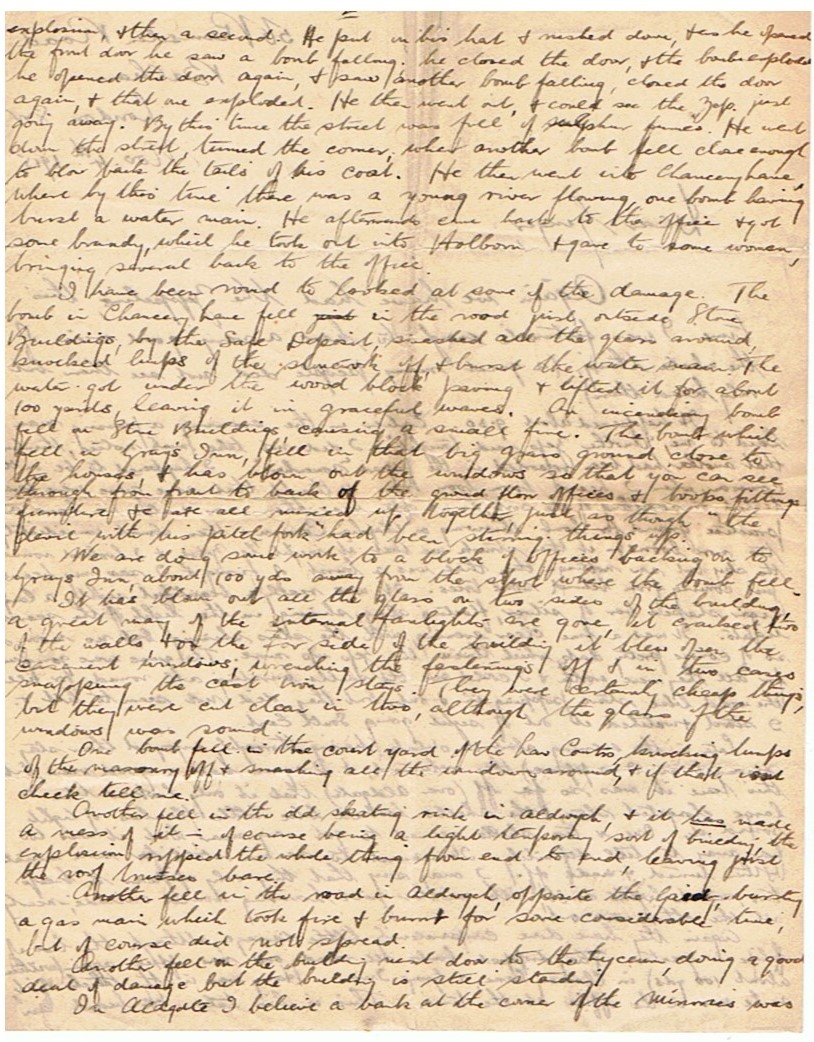 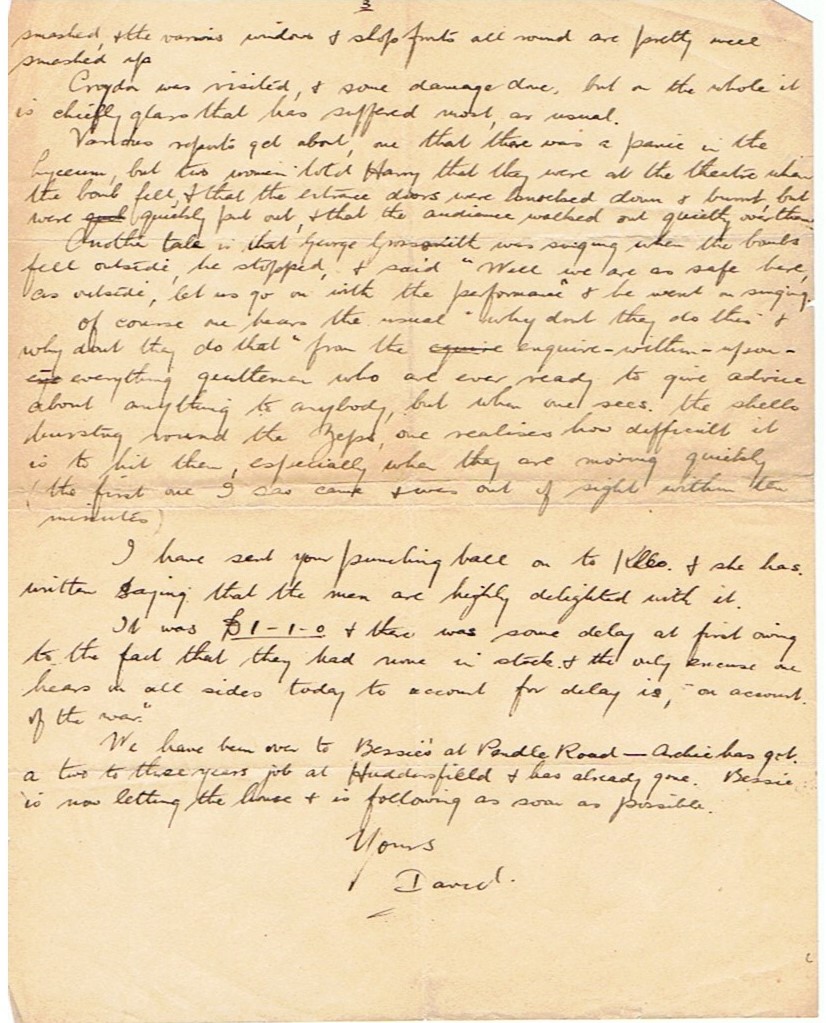 David to Ginger 56 Ramsden Rd, Balham Nov 4th 1915
Dear Ginger,
Again we have had the Zeppelins, this time I was fortunate enough to have a very good view of the whole thing, (a great many people did not see them but only heard them).
It happened about 9.30. Earlier in the evening a passing man said to me, “Another Zep raid tonight” – I did not take much notice, thinking that another had been reported in the papers “somewhere”. I happened to be on the common, when I heard boom, boom, boom, and thought that some guns were being tested, or something of the sort, as we often hear them now and also we have a practice ground for bomb throwing on Clapham Common – then almost immediately two more booms – it struck me that it might be Zeps and I looked round the sky but saw nothing – then there was a burst of firing and I saw my beauty just coming from behind some trees. It was really a beautiful sight, a large cigar shaped bar of silver, floating along, shining in the light of the search lights. It was a fine clear evening, with the stars shining but no moon and so of course pretty dark, which threw the Zep up more. The guns were going now for all they were worth and I could see the shells bursting all round, for all the world like stars popping in and out, but they did not seem to hit, and I stood and watched it out of sight going South East.
Later in the evening about 12 o’clock, having thoroughly enjoyed their stay amongst us I suppose, they returned and again I had a good view, but this time it was so far off (over Aldgate) that it only looked like a large elongated star, and the shells looked like little flashes of light round it. One or two shells seemed to get very near, but it was too far away to tell definitely. It seemed to remain still for some minutes and then turned and made off. I may say that they only appear to keep two search lights on it with another just hovering around outside, nearly all the others are out!

Again they have done comparatively little damage, although the loss of life is greater. They dropped bombs all round our new office again (within about 100 yards) in Chancery Lane and Grays Inn. Harry was in the thick of it as he was in the office at the time. This is his tale. He heard an explosion, and then a second. He put on his hat and rushed down and as he opened the front door he saw a bomb falling, he closed the door and the bomb exploded, he opened the door again, and saw another bomb falling, closed the door again, and that one exploded. He then went out and could see the Zep just going away. By this time the street was full of sulphur fumes. He went down the street, turned the corner, when another bomb fell close enough to blow back the tails of his coat. He then went into Chancery Lane where by this time there was a young river flowing, one bomb having burst a water main. He afterwards came back to the office and got some brandy, which he took out into Holborn and gave to some women, bringing several back to the office.
I have been round to look at some of the damage. The bomb in Chancery Lane fell in the road just outside Stone Buildings, by the Safe Deposit, smashed all the glass around, knocked lumps of the stonework off, and burst the water main. The water got under the wood block paving and lifted it for about 100 yards, leaving it in graceful waves. An incendiary bomb fell on Stone Buildings, causing a small fire. The bomb which fell in Gary’s Inn, fell in that big grass ground close to the houses, and has blown out the windows so that you can see through from front to back of the ground floor offices and books fittings furniture etc etc all mixed up together, just as though “the devil with his pitch fork” had been stirring things up.
We are doing some work to a block of offices backing on to Grays Inn, about 100 yards away from the spot where the bomb fell.
It has blown out all the glass on two sides of the building, a great many of the internal fanlights are gone, it cracked two of the walls, and on the far side of the building it blew open the casement windows, wrenching the fastenings off and in two cases snapping the cast iron stays. They were certainly cheap things but they were cut clear in two, although the glass of the windows was sound.
One bomb fell in the court yard of the Law Courts, knocking lumps of the masonry off and smashing all the windows around, and if that isn’t cheek tell me.
Another fell in the old skating rink in Aldwych, and it has made a mess of it – of course being a light temporary sort of building, the explosion ripped the whole thing from end to end, leaving just the roof trusses bare.
Another fell in the road in Aldwych, opposite the Gaid, bursting a gas main which took fire and burnt for some considerable time, but of course did not spread.
Another fell on the building next door to the Lyceum, doing a good deal of damage but the building is still standing.
In Algate I believe a bank at the corner of the Minories was smashed and the various windows and shop fronts all round were pretty well smashed up.
Croydon was visited, and some damage done, but on the whole it is chiefly glass that has suffered most, as usual.
Various reports get about, one that there was a panic in the Lyceum, but two women told Harry that they were at the theatre when the bomb fell, and that the entrance doors were knocked down and burnt, but were quickly put out, and that the audience walked out quietly over them.
Another tale is that George Grosswith was singing when the bombs fell outside, he stopped, and said “Well we are as safe here as outside, let us go on with the performance” and he went on singing.
Of course one hears the usual “why don’t they do this and why don’t they do that” from the enquire-within-upon-everything gentlemen who are ever ready to give advice about anything to anybody, but when one sees the shells bursting round the Zeps, one realises how difficult it is to hit them, especially when they are moving quickly (the first one I saw came and was out of sight within ten minutes).
I have sent your punching ball to Kleo and she has written to saying that the men are highly delighted with it. It was £1-1-0 and there was some delay at first owing to the fact that they had none in stock and the only excuse one hears on all sides today to account for delay is “on account of the war”.
We have been over to Bessie’s at Pendle Road – Archie has got a two to three years job at Huddersfield and has already gone. Bessie is now letting the house and is following as soon as possible.
Yours
David