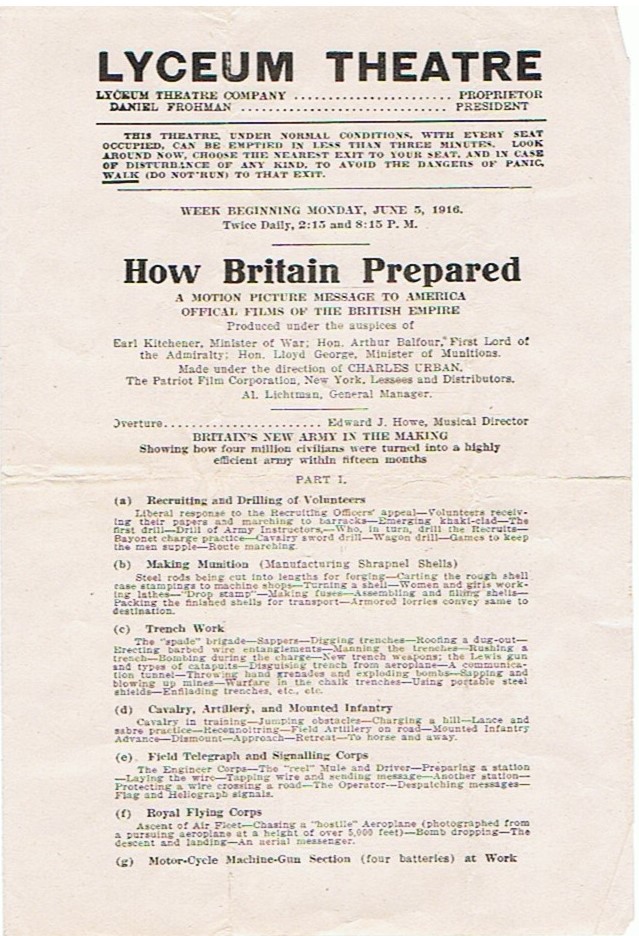 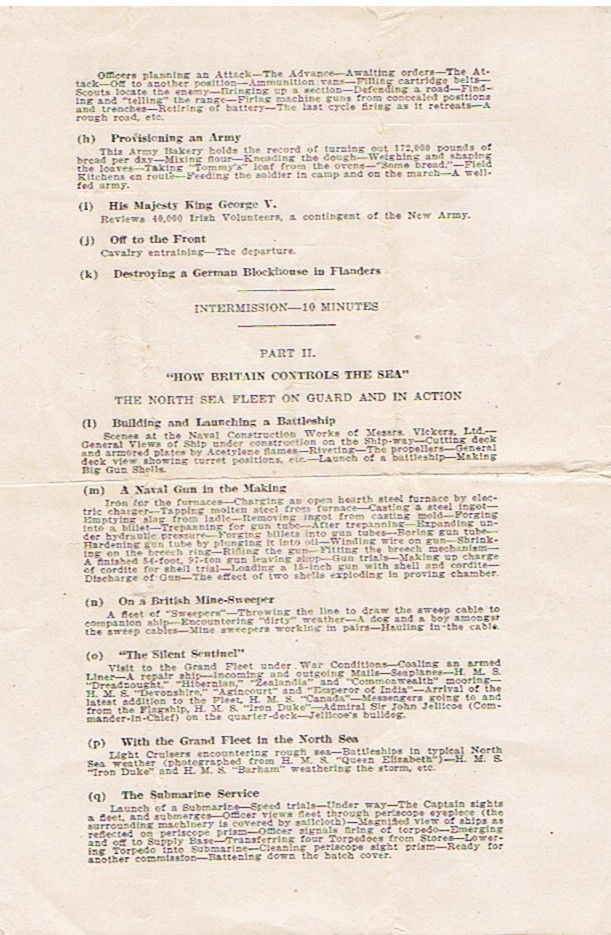 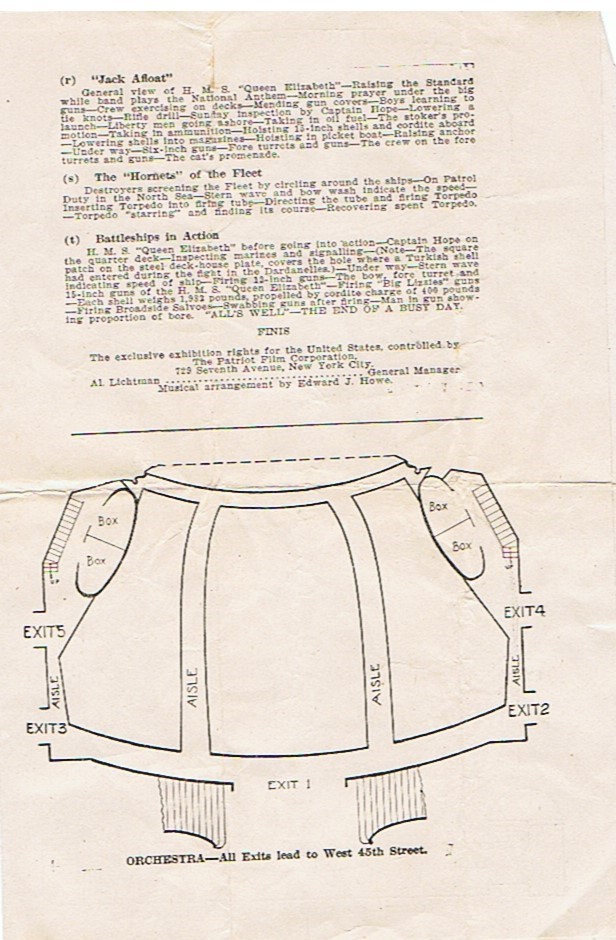 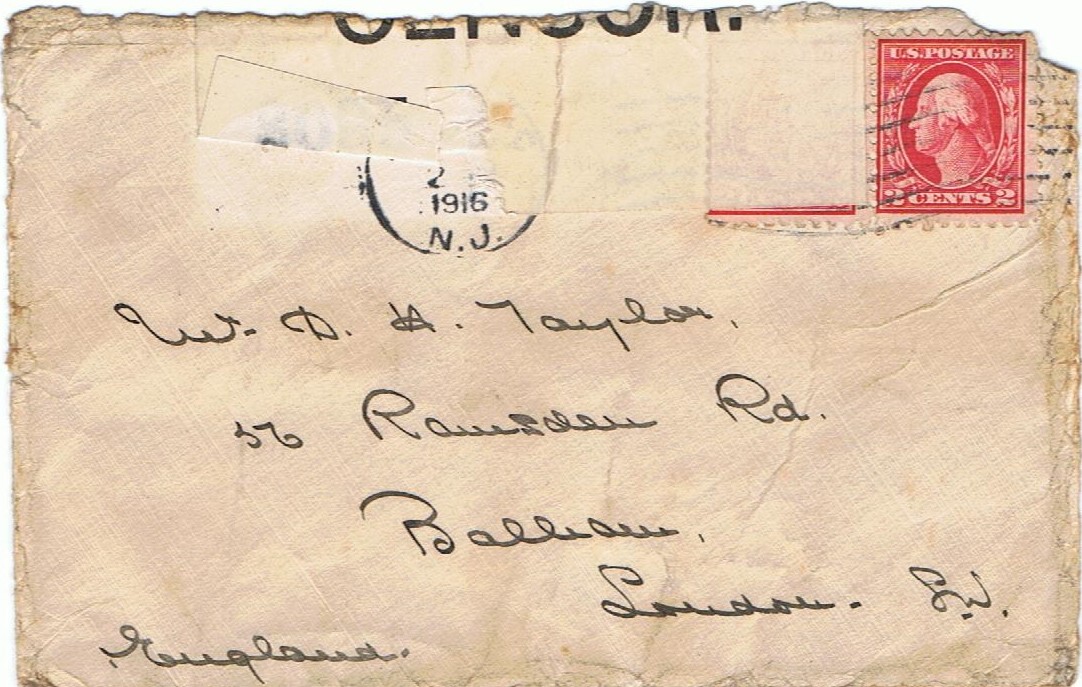 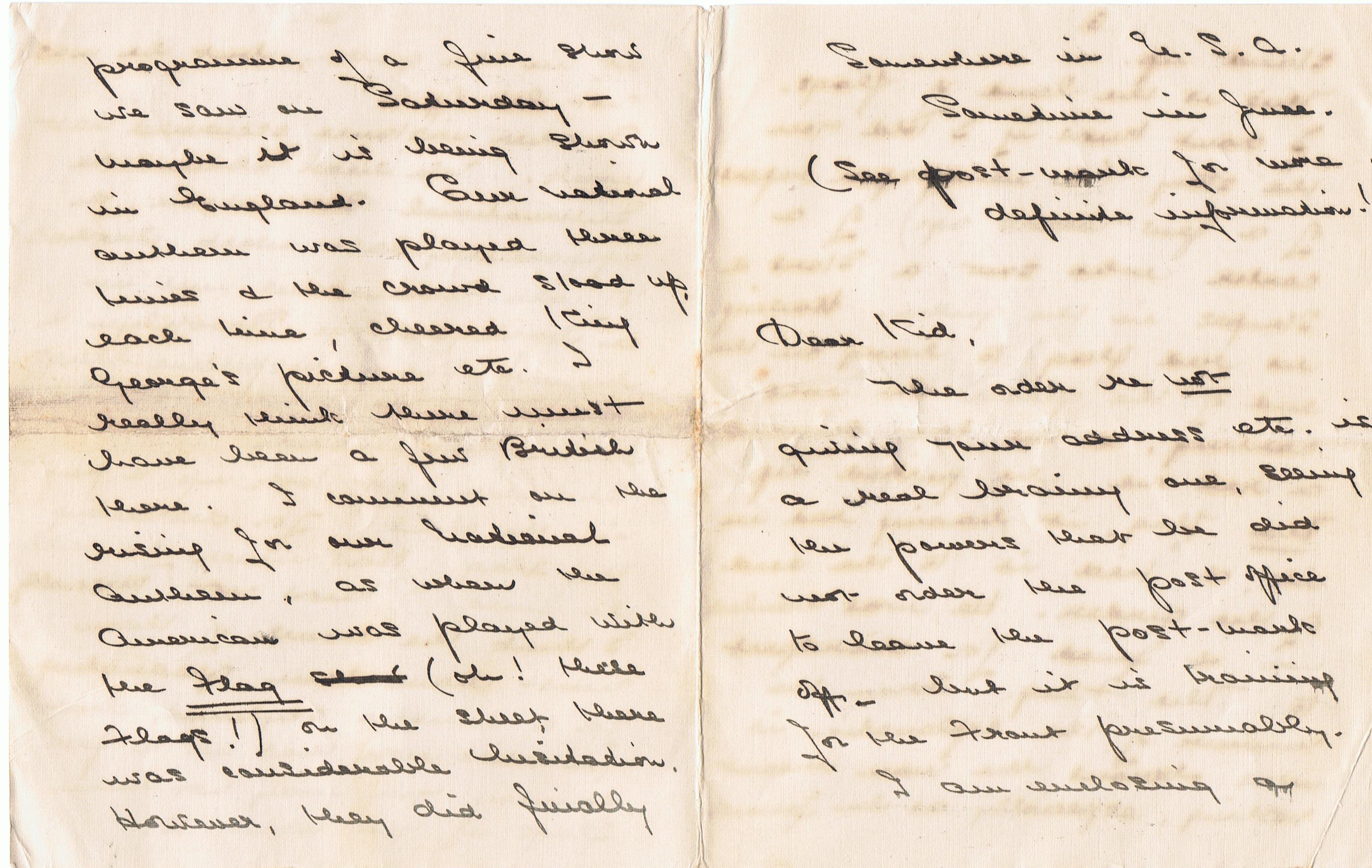 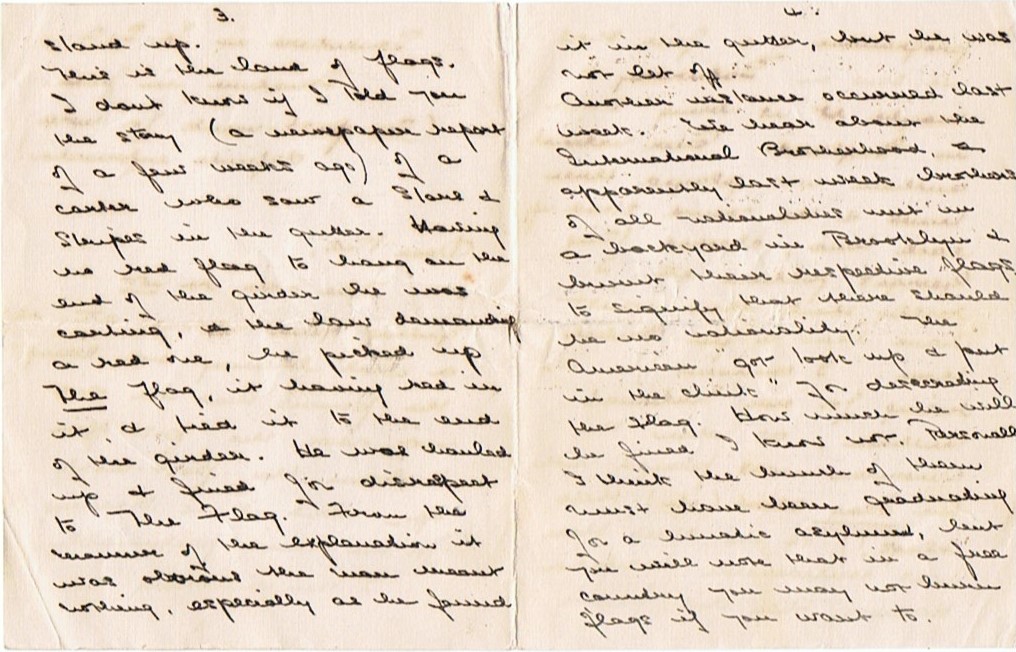 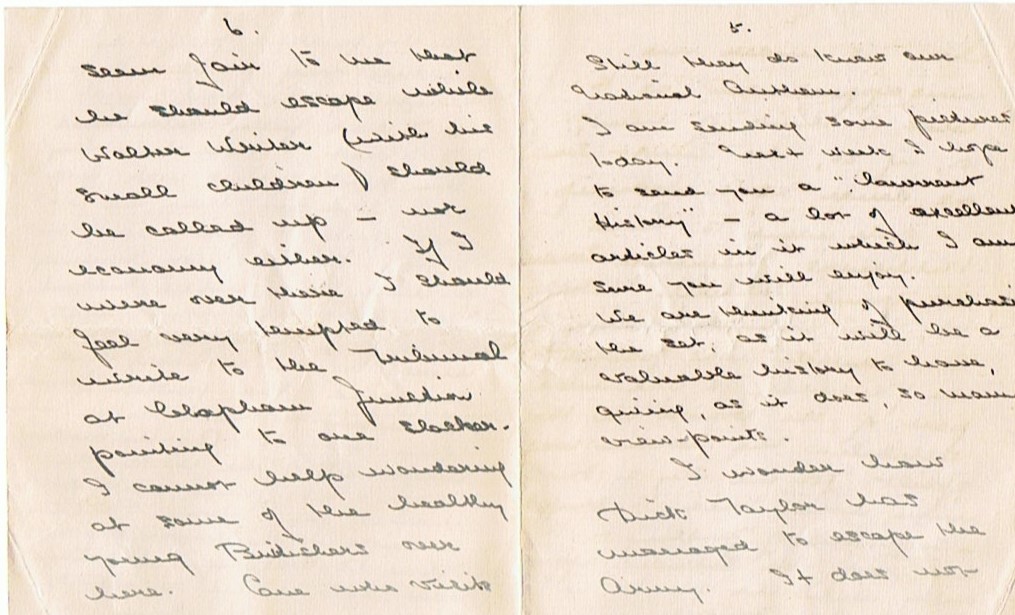 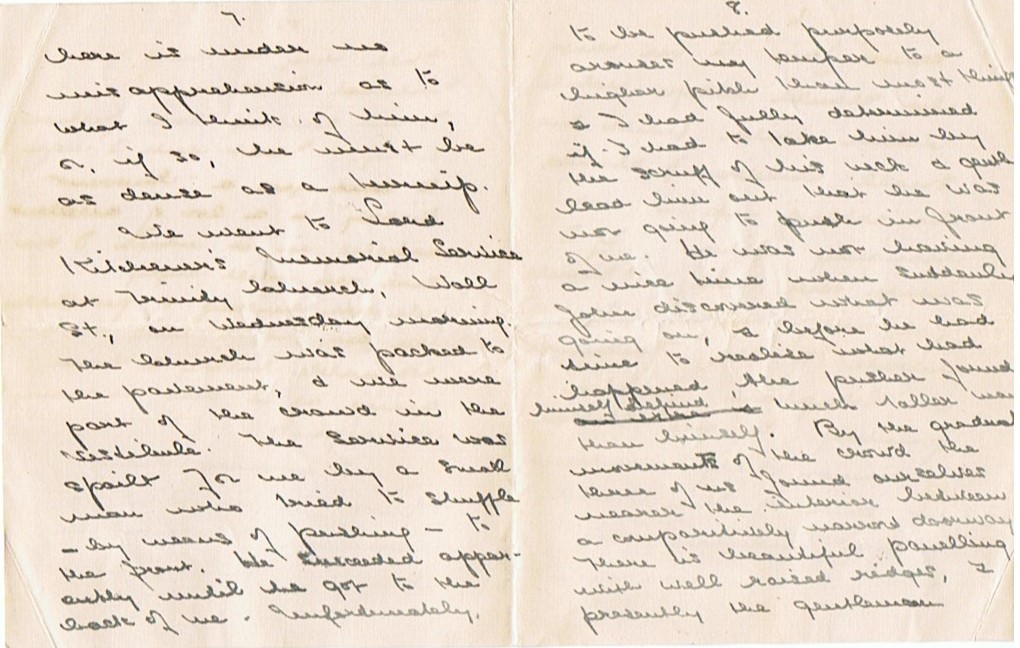 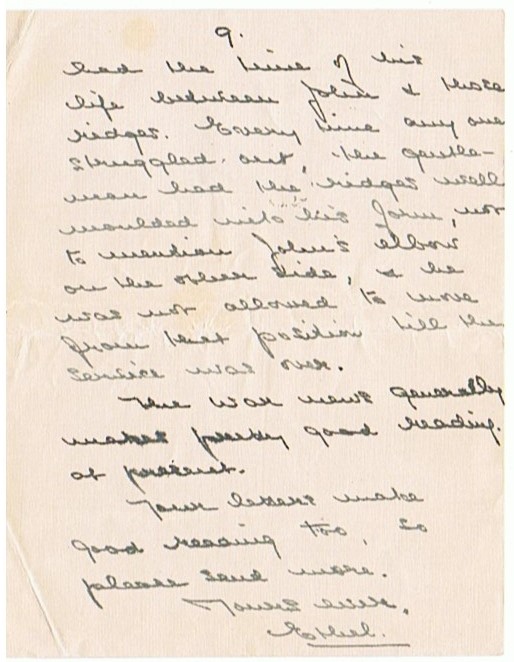 Somewhere in the U.S.A.
Sometime in June (1916)
(see post-mark for more definite information!)

The order re not quoting your address etc is a real brainy one, seeing the powers that be did not order the post office to leave the post-mark off, but it is training for the Front presumably.

I am enclosing a programme of a fine show we saw on Saturday – maybe it is being shown in England. Our national anthem was played three times and the crowd stood up each time, cheered King George’s picture etc. I really think there must have been a few British there. I comment on the rising for our national anthem, as when the American was played with the Flag (oh! Those flags!) on the sheet there was considerable hesitation. However, they did finally stand up.

This is the land of flags. I don’t know if I told you the story (a newspaper report of a few weeks ago) of a carter who saw a Stars and Stripes in the gutter. Having no red flag to hang on the end of the girder he was carting, he picked up The flag, it having red in it, and tied it to the end of the girder. He was hauled up and fined for disrespect to The Flag. From the manner of the explanation it was obvious the man meant nothing, especially as he found it in the gutter, but he was not let off.

Another instance occurred last week. We hear about the International Brotherhood, and apparently brother of all nationalities met in a backyard in Brooklyn and burnt their respective flags, to signify that there should be no nationality. The American “got lock up and put in the clink” for desecrating the flag. How much he will be fined I know not. Personally I think the bunch of them must have been graduating for a lunatic asylum, but you will note that in a free country you may not burn flags if you want to. Still they know our national anthem.

I am sending some pictures today. Next week I hope to send you a “Current History” – a lot of excellent articles in it which I am sure you will enjoy.

We are thinking of purchasing the set, as it will be a valuable history to have, quoting, as it does, so many viewpoints.

I wonder how Dick Taylor has managed to escape the Army. It does not seem fair to me that he should escape while Walter Writer (with his small children) should be called up – nor economy either. If I were over there I should be very tempted to write to the Tribunal at Clapham Junction pointing out our slacker. I cannot help wondering at some of the healthy young Britishers over here. Cane who visits here is under no misapprehension as to what I think of him, or if so, he must be as dense as a turnip.

We went to Lord Kitchener’s Memorial Service at Trinity Church, Wall St., on Wednesday morning. The church was packed to the pavement, and we were part of the crowd in the vestibule. The service was spoilt for me by a small man who tried to shuffle – by means of pushing – to the front. He succeeded apparently until he got to the back of me. Unfortunately, to be purposely arouses my temper to a higher pitch than most things, and I had fully determined if I had to take him by the scruff of his neck and gently lead him out that he was not going to push in front of me. He was not having a nice time when suddenly John discovered what was going on, and before he had time to realise what had happened, the pusher found himself behind a much taller man than himself. By the gradual movements of the crowd the three of us found ourselves nearer the interior between a comparatively narrow door way. There is beautiful panelling with well raised ridges, and presumably the gentleman had the time of his life between John and those ridges. Every time anyone struggled out, the gentleman had the ridges well moulded into his form, not to mention John’s elbow on the other side, and he was not allowed to move from that position til the service was over.

Your letters make good reading too, so please send more.