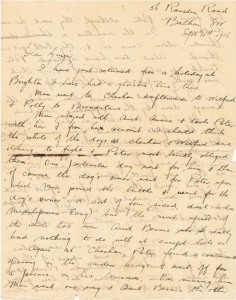 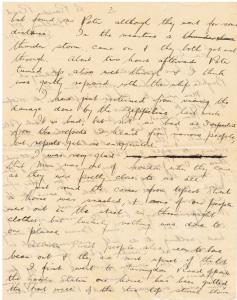 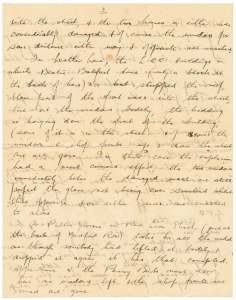 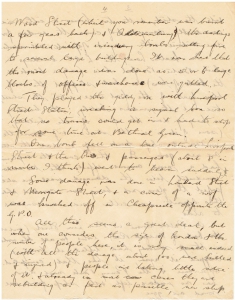 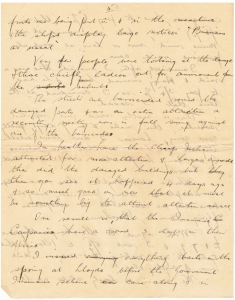 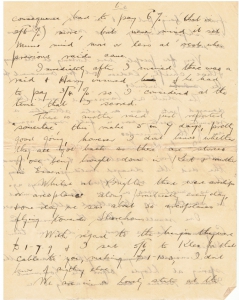 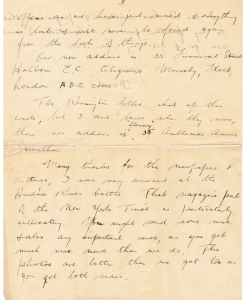 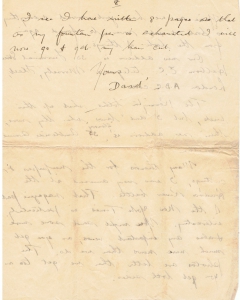 I have just returned from a holiday at Brighton and have had a glorious time there.

Mum went to Chesham and afterwards to Watford and Polly to Broadstairs.

Mum stayed with Aunt Annie and took Peter with her and from her account I should think the whole of the dogs at Chesham and Watford were itching to fight and Peter most kindly obliged them. One particular dog went for him and then of course the dog’s owner went for Peter upon which Mum joined the battle and went for the dog’s owner (a sort of four sided duel a la Midshipman Easy) but the most upset of the whole lot was Aunt Bessie who really had nothing to do with it except look on.

Again, at Chesham, Peter found a convenient opening in the garden hedge and went off for a picnic on his lonesome. On missing him Mum went one way and Aunt Bessie the other but found no Peter although they went for some distance. In the meantime a thunder storm came and they both got wet through. About two hours afterwards Peter turned up also wet through and I think was gently reproved with the whip.

I have just returned from viewing the damage done by the Zeppelins last week.

It is bad, but not so bad as I expected from the reports I heard from various people, but reports get so exaggerated.

I was very glad that Mum was out of London when they came as they were pretty close to us all.

Just around the corner from Upcot Street a house was smashed, and some of our people were out in the street in their night clothes, but luckily nothing was done to our places.

Alberta Street people also seem to have been out and they are most upset of the lot.

I first went to Farringdon Road, opposite the Goods Station one house had been gutted, the front wall of the two top stories blown into the street, and the two houses on either side considerably damaged of of course the windows for some distance either way and opposite were smashed.

In Leather Lane, the L.C.C. buildings in which Beatie Bulford lives (only a block at the back of hers) a bomb stripped the roof, blew part of the front wall into the street, tore out the windows bodily, the bedding is hanging down the front of the building, (some of it in the street) and of course the windows and shop fronts up and down the street are all gone. In this case the explosion had a most curious effect, the two windows immediately below the damaged wall are still perfect the glass not being even cracked whilst those opposite and on either side are smashed to atoms.

A Public House in Red Lion Street, (just at the back of Bedford Road) looks for all the world as though somebody has lifted it bodily and dropped it again, it has that crumpled appearance and the Penny Bank next door has no windows left and the shop fronts all round are gone. Wood Street (which you remember was burnt a few years back) and Aldermanbury the darlings sprinkled with incendiary bombs setting fire to several large buildings. It was here that the most damage was done as 5 or 6 large blocks of offices and warehouses were gutted.

They played the giddy ox with Liverpool Street Station, wrecking a signal box so that no trains could get in and had to stop for some time at Bethnal Green.

One bomb fell on a bus outside Liverpool Street and the bus and passengers (about 8 in number I think) went to heaven suddenly.

Some damage was done in Lombard Street and Moorgate Street, and a corner of a roof was knocked off in Cheapside opposite the G.P.O.

All this seems a great deal, but when one considers the size of London and the number of people there, it is very small indeed (with all the damage about 100 were killed and injured) and people taking little notice of it and already in most cases they are rebuilding as fast as possible, new shop fronts are being put in and in the meantime the shops display large notices “Business as usual”.

Very few people were looking at the damage and those chiefly ladies out for amusement from the suburbs.

The streets are barricaded round the damaged parts and as an extra attraction a recruiting meeting was in full swing against one of the barricades.

In Leather Lane the Cheap Jacks attracted far more attention and larger crowds than did the damaged buildings but then you see it happened 4 days ago and so much goes on now that it must be something big to attract attention at all.

One result is, that the Insurance Companies have a crowd 3 deep in their offices.

I insured everything back in the spring at Lloyds before the Government Insurance scheme came along and in consequence had to pay 6% (that is 2/6%) more, but never mind it set Mums more or less at rest when previous raids came.

Immediately after I insured there was a raid and Harry insured and he had to pay ¾% so I considered at the time that I scored.

There is another raid just reported “somewhere”, this makes 5 in 7 days, pretty good going, however I don’t know whether they all got back as there are stories on one being brought down in Kent and another in Essex.

Whilst at Brighton there were airships or aeroplanes along practically every day, and one day we saw about 30 aeroplanes flying towards Shoreham.

We are in a lively state at the office as we have just moved and everything is lost and will never be found again from the look of things.

The Kennington folks shut up this week, but I don’t know when they move, their new address is Ambleside Avenue, Streatham.

Many thanks for the newspapers and cuttings, I was very amused at the Hudson River battle. That magazine part of the New York Times is particularly interesting. You might send some more and also any important news, as you get much more news than we do. The photos are better than we get too as you get both sides.

I see that I have written 8 pages so that as my fountain pen is exhausted I will now go and get my hair cut.