Note: May’s earliest letters are carbon copies that she made. 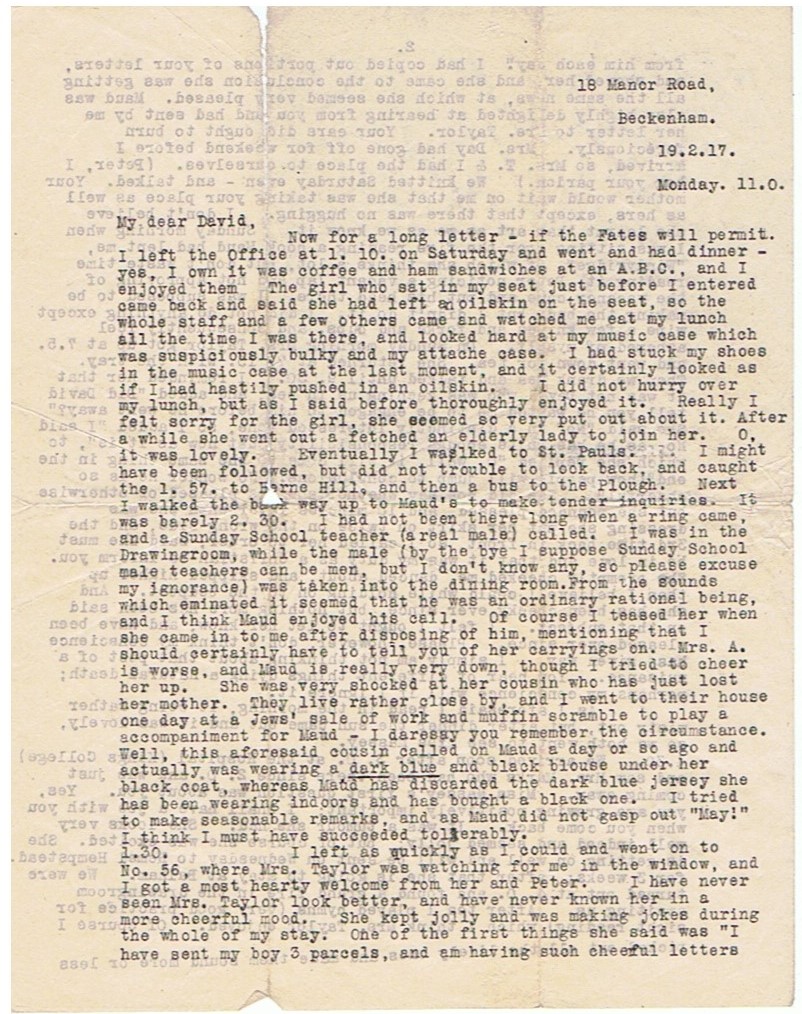 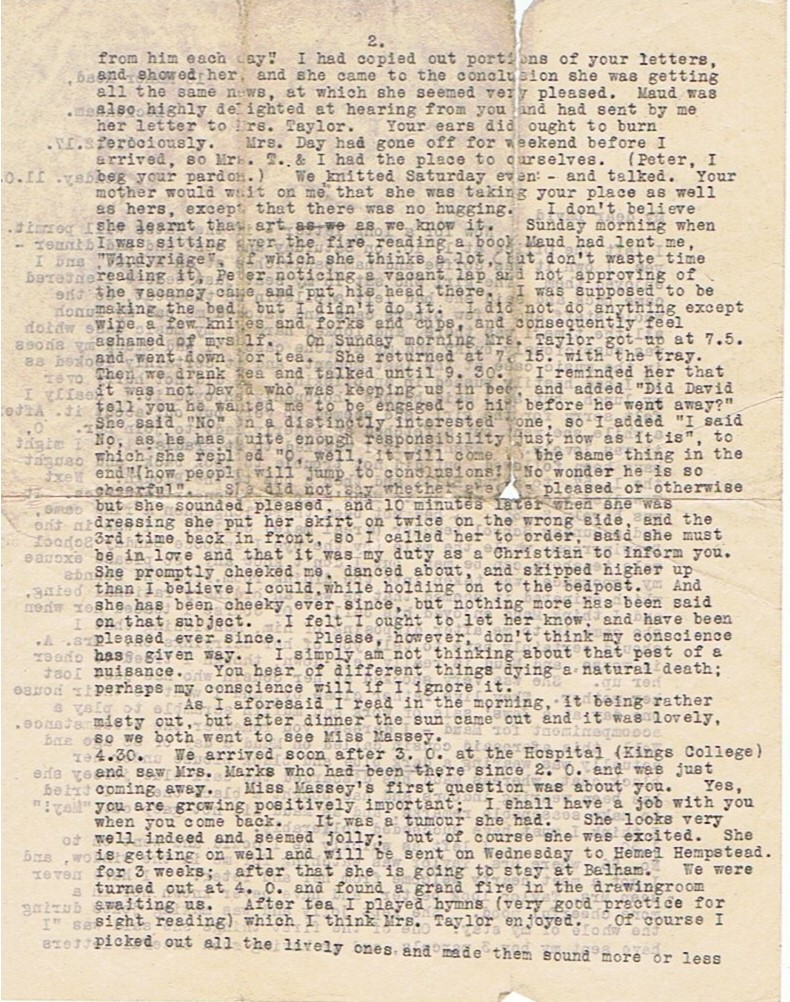 Now for a long letter – if the Fates will permit. I left the Office at 1. 0. on Saturday and went and had dinner -yes.,. I own it was coffee and ham sandwiches at an A.B.C. , and I enjoyed them. The girl who sat in my seat just before I entered came back and said she had left an oilskin on the seat, so the whole staff and -a few others came and watched me eat my lunch all the time I was there, and looked hard at my music case which was suspiciously bulky and my attache case. I had stuck my shoes in the music case at the last moment, and it certainly looked as if I had hastily pushed in an oilskin.         I did not hurry over my lunch, but as I said before, thoroughly enjoyed it.             I

Really I felt sorry for the girl, she seemed so very put out about it. After awhile she went out a fetched an elderly lady to join her. 0, it was lovely. Eventually I walked to St. Pauls. I might have been followed, but did not trouble to look back, and caught the 1. 57. to Herne Hill and then a bus to the Plough. Next I walked the back way up to Maud’s to make tender enquiries. It was barely 2.30.      I had not been there long when a ring came, and a Sunday School teacher (a real male) called. I was in the Drawing room, while the male (by the bye I suppose Sunday School male teachers can be men, but I don’t know any, so please excuse my ignorance) was taken into the dining room. From the sounds which eminated it, seemed that he was an ordinary rational being, and I think Maud enjoyed his call, of course I teased her when she came in to me after disposing of him, mentioning that I should certainly have to tell you of her carryings on.

Mrs. A. is worse, and Maud is, really very down, though I tried to cheer her up. She was very shocked at her cousin who has just lost her mother. They live rather close by, and I went to their house one day at a Jews’ sale of work and muffin scramble to play an accompaniment for Maud -I daresay you remember, the circumstance. Well, this aforesaid cousin called on Maud a day or so ago and actually was wearing a dark blue and black blouse under her black coat, whereas Maud has discarded the dark blue jersey she has been wearing Indoors and has bought a black one. I tried to make seasonable remarks, and as Maud did not gasp out “May!” I think I must have succeeded tolerably.

1.30.      I left as quickly as I could and went on to No. 56 where Mrs Taylor was watching for me in the window, and I got a most hearty welcome from her and Peter. I have never seen Mrs. Taylor look better, and have never known her in a more cheerful mood. She kept jolly and was making jokes during the whole of my stay. One of the first things she said was “I have sent my boy 3 parcels, and am having such cheerful letters from him each day. I had copied out portions of your letters, and showed her, and she came to the conclusion she was getting all the same news, at which she seemed very pleased. Maud was also highly delighted at hearing from you and had sent by me her letter to Mrs Taylor. Your ears did ought to burn ferociously. Mrs Day had gone off for the weekend before I arrived, so Mrs T & I had the place to ourselves. (Peter, I beg your pardon.) We knitted Saturday evening and talked. Your mother would wait on me that she was taking your place as well as hers, except that there was no hugging. I don’t believe she learnt that art as we know it.

Sunday morning when I was sitting over the fire reading a book Maud had lent me, “Windyridge”, of which she thinks a lot, but don’t waste time reading it, Peter noticed a vacant lap and not approving of the vacancy came and put his head there. I was supposed to be making the bed but I didn’t do it. I did not do anything except wipe a few knives and forks and cups, and consequently feel ashamed of myself. On Sunday morning Mrs Taylor got up at 7.5 and went down for tea. She returned at 7.15 with the tray. Then we drank tea and talked until 9.30. I reminded her that it was not David that was keeping us in bed, and added “Did David tell you he wanted me to be engaged to him before he went away?” She said “No” in a distinctly interested tone, so I added “I said No, as he has quite enough responsibility just now as it is”, to which she replied “O, well, it will come to the same thing in the end” (how people will jump to conclusions!) No wonder he is so cheerful”. She did not say whether she was pleased or otherwise but she sounded pleased, and 10 minutes later when she was dressing she put her skirt on twice on the wrong side, and the 3rd time back in front, so I called her to order, said she must be in love and that it was my duty as a Christian to inform you. She promptly cheeked me, danced about, and skipped higher than I believe I could, while holding on to the bedpost. And she has been cheeky ever since, but nothing more has been said on that subject. I felt I ought to let her know, and have been pleased ever since. Please, however, don’t think my conscience has given way. I simply am not thinking about that pest of a nuisance. You hear of different things dying a natural death; perhaps my conscience will if I ignore it.

As I aforesaid I read in the morning, it being rather misty out, but after dinner the sun came out and it was lovely, so we both went to see Miss Massey.

4.30 We arrived soon after 3.0 at the Hospital (Kings College) and saw Mrs Marks who had been there since 2.0 and was just coming away. Miss Massy’s first question was about you. Yes, you are growing positively important; I shall have a job with you when you come back. It was a tumor she had. She looks very well indeed and seemed jolly; but of course she was excited. She is getting on well and will be sent on Wednesday to Hemel Hempstead for 3 weeks; after that she is going to stay at Balham. We were turned out at 4.0 and found a grand fire in the drawing room awaiting us. After tea I played hymns (very good practice for sight reading) which I think Mrs Taylor enjoyed. Of course I picked out all the lovely ones and made them sound more or less