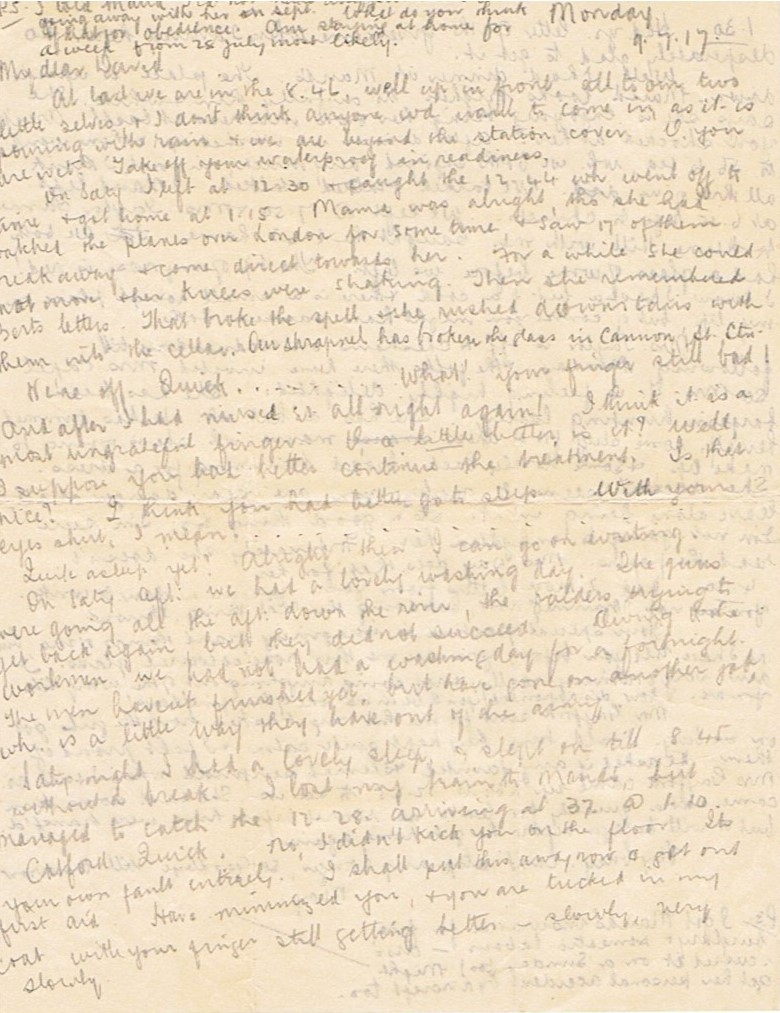 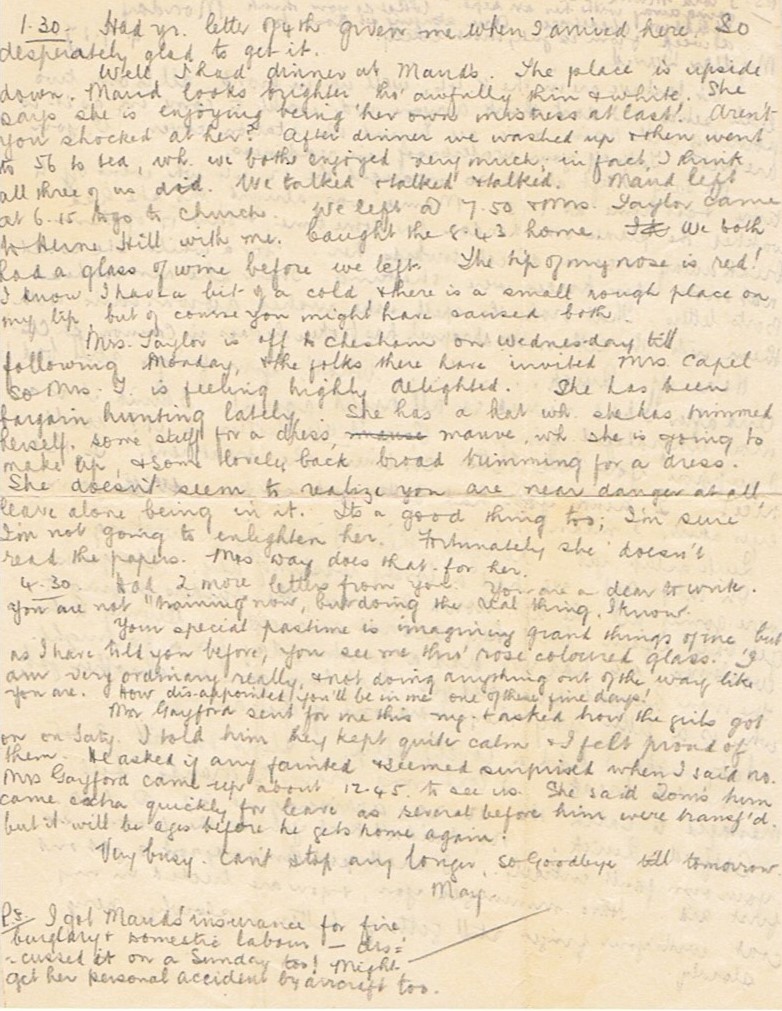 Note. David never received this letter: it was returned from the BEF

At last we are in the 8.46, well up front, all to our two little selves, and I don’t think anyone would want to come in, as it is pouring with rain and we are beyond the station cover. O you are wet. Take off your waterproof in readiness.

On Saturday I left at 12.30 and caught the 12.44 which went off to time and got home at 1.15. Mama was alright, tho she had watched the planes over London for some time, and saw 17 of them break away and come direct towards her. For a while she could not move and her knees were shaking. Then she remembered Bert’s letters. That broke the spell and she rushed downstairs with them into the cellar. Our shrapnel has broken the glass in Cannon Street Station.

We’re off. Quick….what! your finger still bad! And after I had nursed it all night again! I think it is a most ungrateful finger. O, a little better, is it? Well, I suppose you had better continue the treatment. Is that nice? I think you had better go to sleep. With your eyes shut I mean……

Quite asleep yet? Alright, then I can go on writing.

On Saturday afternoon we had a lovely washing day. The guns were going all the afternoon down the river, the raiders trying to get back again, but they did not succeed. Owing to the workman we had not had a washing day for a fortnight. The men haven’t finished yet, but have gone on another job, which is a little way they have out of the army.

Catford. Quick. No, I didn’t kick you on the floor. It’s your own fault entirely. I shall put this away now and get out first aid. Have miniaturized you, and have tucked you in my coat with your finger still getting better – slowly, very slowly.

1.30 Had your letter of 4th given me when I arrived here. So desperately glad to get it.

Well, I had dinner at Maud’s. The place is upside down. Maud looks brighter tho’ awfully thin and white. She says she is enjoying being her own mistress at last! Aren’t you shocked at her? After dinner we washed up and then went to 56 for tea, which we both enjoyed very much, in fact, I think all three of us did. We talked and talked and talked. Maud left at 6.15 to go to church. We left at 7.50 and Mrs Taylor came to Herne Hill with me. Caught the 8.43 home. We both had a glass of wine before we left. The tip of my nose is red! I know I have a bit of a cold and there is a small rough place on my tip, but of course you might have caused both.

Mrs Taylor is off to Chesham on Wednesday till following Monday, and the folks there have invited Mrs Capel. So Mrs Taylor is feeling highly delighted. She has been bargain hunting lately. She has a hat which she trimmed herself, some stuff for a dress, mauve, which she is going to make up, and some lovely back broad trimming for a dress. She doesn’t seem to realise you are near danger at all, leave alone being in it. Its a good thing too; I’m sure I’m not going to enlighten her. Fortunately she doesn’t read the papers. Mrs Day does that for her.

4.30 Had two more letters from you. You are a dear to write. You are not training now, but doing the real thing, I know.

Your special pastime is imagining grand things of me, but as I told you before, you see me thro’ rose coloured glass. I am very ordinary really, and not doing anything out of the way, like you are. How disappointed you’ll be in me one of these fine days!

Mr Gayford sent for me this morning and asked how the girls got on on Saturday. I told him they kept quite calm and I felt proud of them. He asked if any fainted and seemed surprised when I said no. Mrs Gayford came up about 12.45 to see us. She said Tom’s turn came extra quickly for leave as several before him were transferred, but it will be ages before he gets home again.

Very busy. Can’t stop any longer, so Goodbye till tomorrow.

P.S. I got Maud’s insurance for fire, burglary and domestic labour – discussed it on a Sunday too! Might get her personal accident by aircraft too.

P.S. I told Maud I could not make any promises about going away with her in September. What do you think about that for obedience. Am staying at home for a week from 28 July most likely.