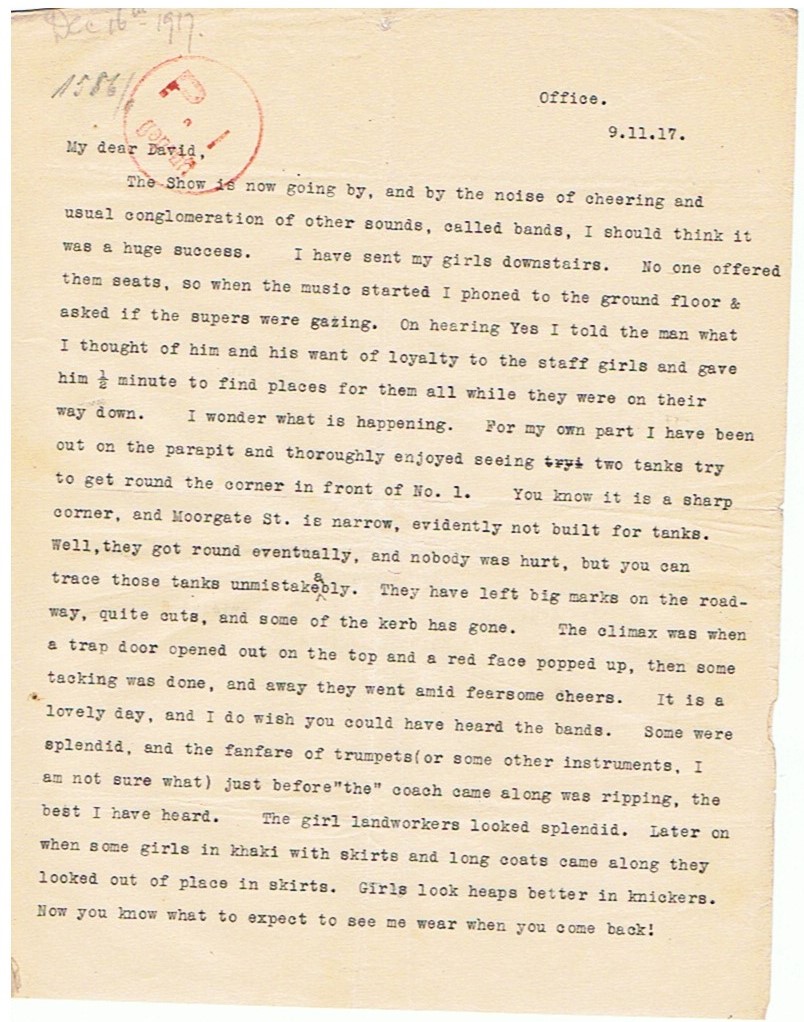 The Show is now going by, and by the noise of cheering and usual conglomeration of other sounds, called bands, I should think it was a huge success. I have sent my girls downstairs. No one offered them seats, so when the music started I phoned to the ground floor and asked if the supers were gazing. On hearing Yes I told the man what I thought of him and his want of loyalty to the staff girls and gave him ½ minute to find places for them all while they were on their way down. I wonder what is happening. For my own part I have been out on the parapet and thoroughly enjoyed seeing two tanks try to get round the corner in front of No. 1. You know it is a sharp corner, and Moorgate St is narrow, evidently not built for tanks. Well, they got round eventually, and nobody was hurt, but you can trace those tanks unmistakeably. They have left big marks on the roadway, quite cuts, and some of the curb has gone. The climax was when a trap door opened out of the top and a red face popped up, then some tacking was done, and away they went amid fearsome cheers. It is a lovely day, and I do wish you could have heard the bands. Some were splendid, and the fanfare of trumpets (or some other instruments, I am not sure what) just before “the” coach came along was ripping, the best I have heard. The girl landworkers looked splendid. Later on when some girls in khaki with skirts and long coats came along they looked out of place in skirts. Girls look heaps better in knickers. Now you know what to expect to see me wear when you come back!

This morning I received your letter of 6th Oct and was highly delighted to hear from you. I immediately posted on Mrs Taylor’s portion, and will copy out mine and take her tomorrow. I sent you a professional photo of myself a week or so ago. The waistcoat I will start next week. This week I shall finish off my second vest. I am making Ern socks in the train. Mrs Taylor has enough to keep you going for awhile, she says. I am awfully glad you want a waistcoat. Hope the dimensions will be alright. Before, I used to try it on Bert. Expect I shall spend the weekend at No. 56. You see, dear, I have a new hat to show off, so that, as you know, is every inducement to go to see someone. I have given Maud your message, and will write a short note to Muriel.

If I don’t leave off and get on with the work we shall have to stay late. The Show is over and the girls had very good seats on the ground floor. All’s well that ends well. I have since received many semi-apologies from the Cashier’s Dept. They all saved the best seats for the staff girls, and then when the Show started and our girls did come down they let the temporary girls have them. Perhaps!

There are three girls away queer from this department, hence we are behindhand, and the Chief wants us to take on more work. However, he has given us a week to pull up.

P.S. When I told Mama this morning you wanted another waistcoat, she said “Bless his heart” !!!!!