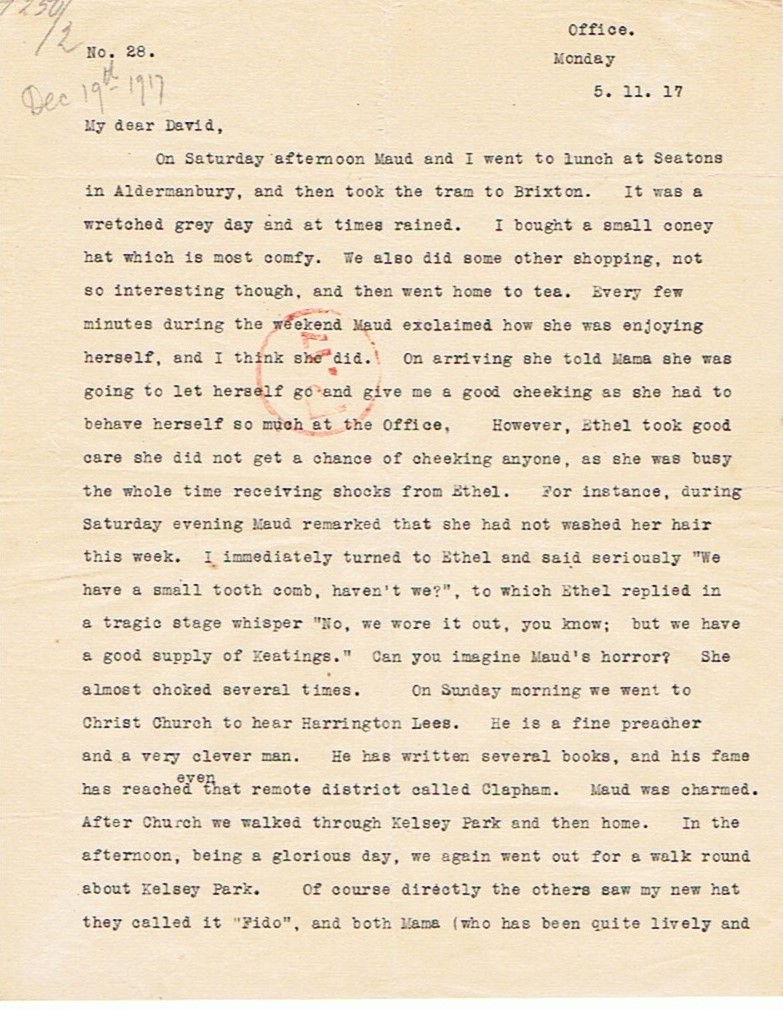 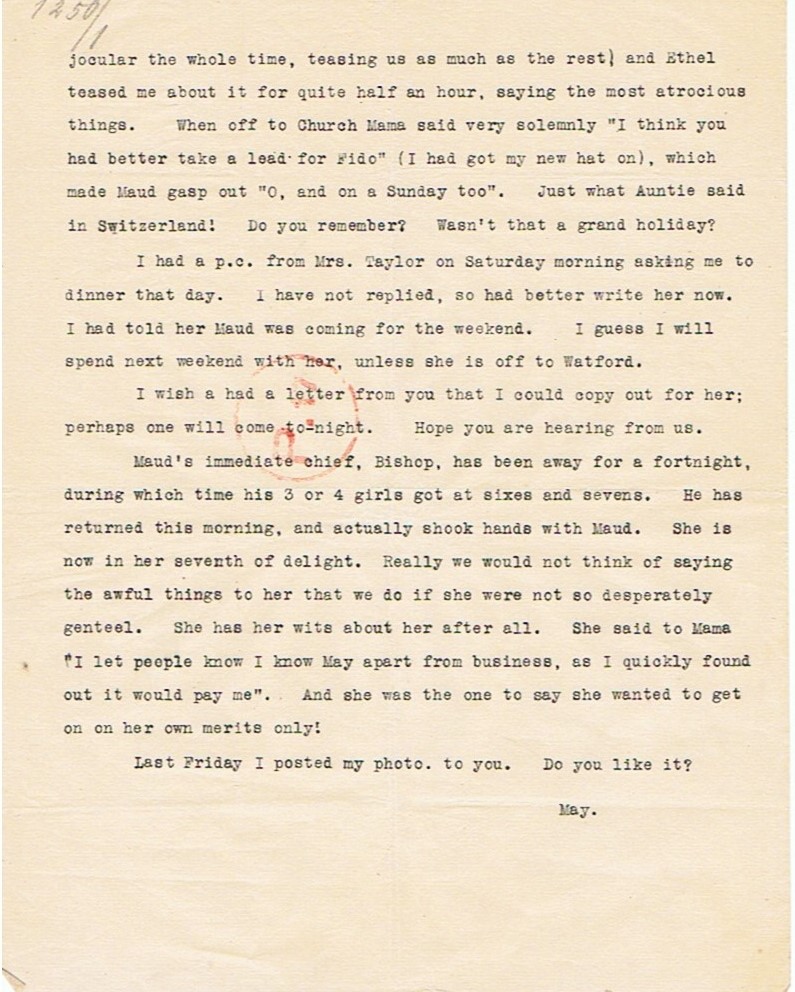 On Saturday afternoon Maud and I went to lunch at Seatons in Aldermanbury, and then took the tram to Brixton. It was a wretched grey day and at times rained. I bought a small coney hat which is most comfy. We also did some other shopping, not so interesting though, and then went home to tea. Every few minutes during the weekend Maud exclaimed how she was enjoying herself, and I think she did. On arriving she told Mama she was going to let herself go and gave me a good cheeking as she had to behave herself so much at the Office. However, Ethel took good care she did not get a chance of cheeking anyone, and she was busy the whole time receiving shocks from Ethel. For instance, during Saturday evening Maud remarked that she had not washed her hair this week. I immediately turned to Ethel and said seriously “We have a small tooth comb, haven’t we?” to which Ethel replied in a tragic stage whisper “No, we wore it out you know; but we have a good supply of Keatings.” Can you imagine Maud’s horror? She almost choked several times. On Sunday morning we went to Christ Church to hear Harrington Lees. He is a fine preacher and a very clever man. He has written several books, and his fame has reached even that remote district called Clapham. Maud was charmed. After Church we walked through Kelsey Park then home. In the afternoon, being a glorious day, we again went out for a walk round about Kelsey Park. Of course directly the others saw my new hat they called it “Fido”, and both Mama (who has been quite lively and jocular the whole time, teasing us as much as the rest) and Ethel teased me about it for quite half an hour, saying the most atrocious things. When off to Church Mama said very solemnly “I think you had better take a lead for Fido” (I had got my new hat on), which made Maud gasp out “O, and on a Sunday too”. Just what Auntie said in Switzerland! Do you remember? Wasn’t that a grand holiday?

I had a p.c. from Mrs Taylor on Saturday morning asking me to dinner that day. I have not replied, so had better write to her now. I had told her Maud was coming for the weekend. I guess I will spend next weekend with her, unless she is off to Watford.

I wish I had a letter from you that I could copy out for her; perhaps one will come tonight. Hope you are hearing from us.

Maud’s immediate chief, Bishop, has been away for a fortnight, during which time his 3 or 4 girls got at sixes and sevens. He has returned this morning, and actually shook hands with Maud. She is now in her seventh of delight. Really we would not think of saying the awful things to her that we do if she were not so desperately genteel. She has her wits about her after all. She said to Mama “I let people know I know May apart from business, as I quickly found out it would pay me”. And she was the one to say she wanted to get on on her own merits only!

Last Friday I posted my photo to you. Do you like it?