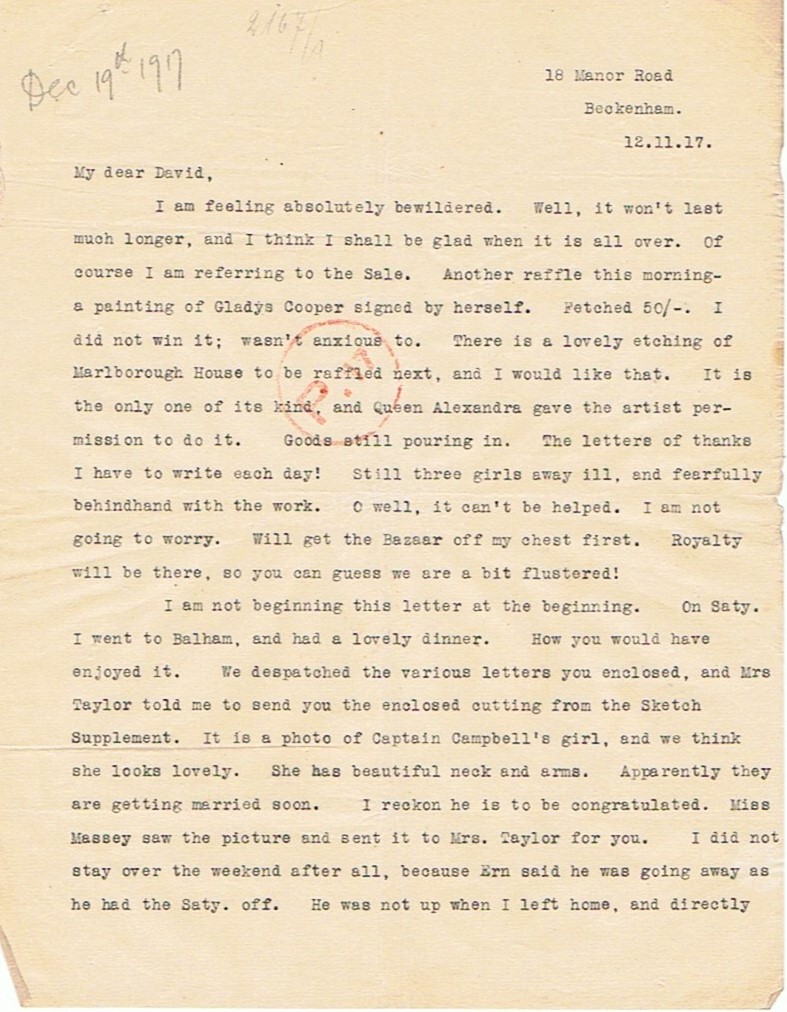 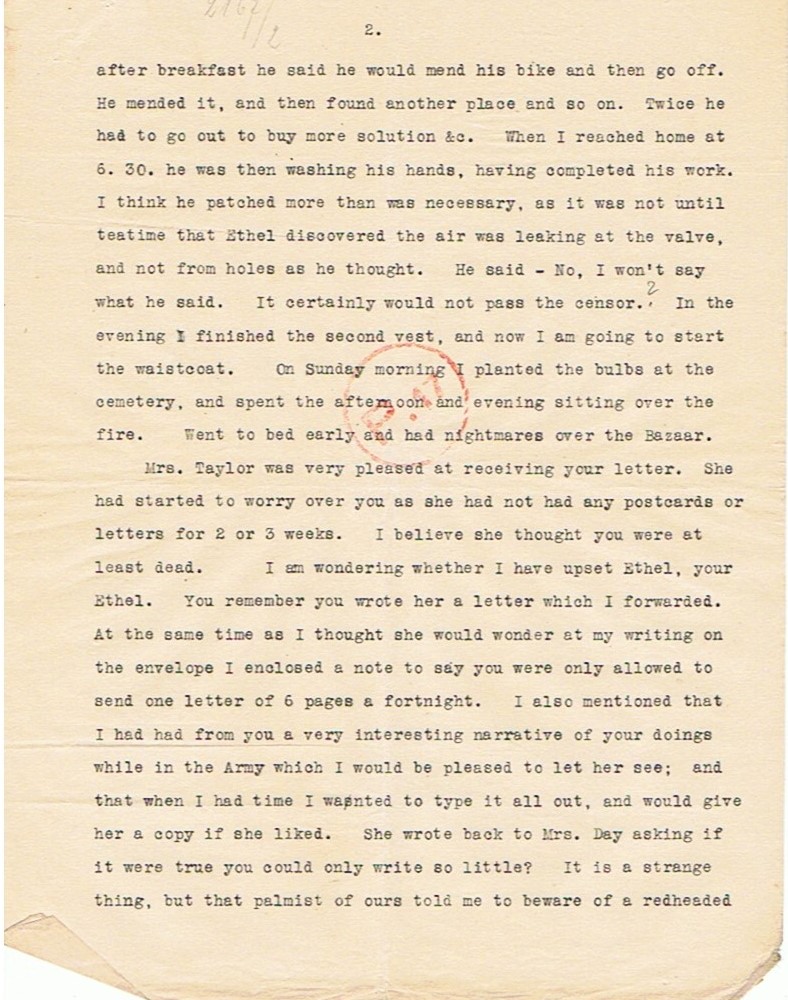 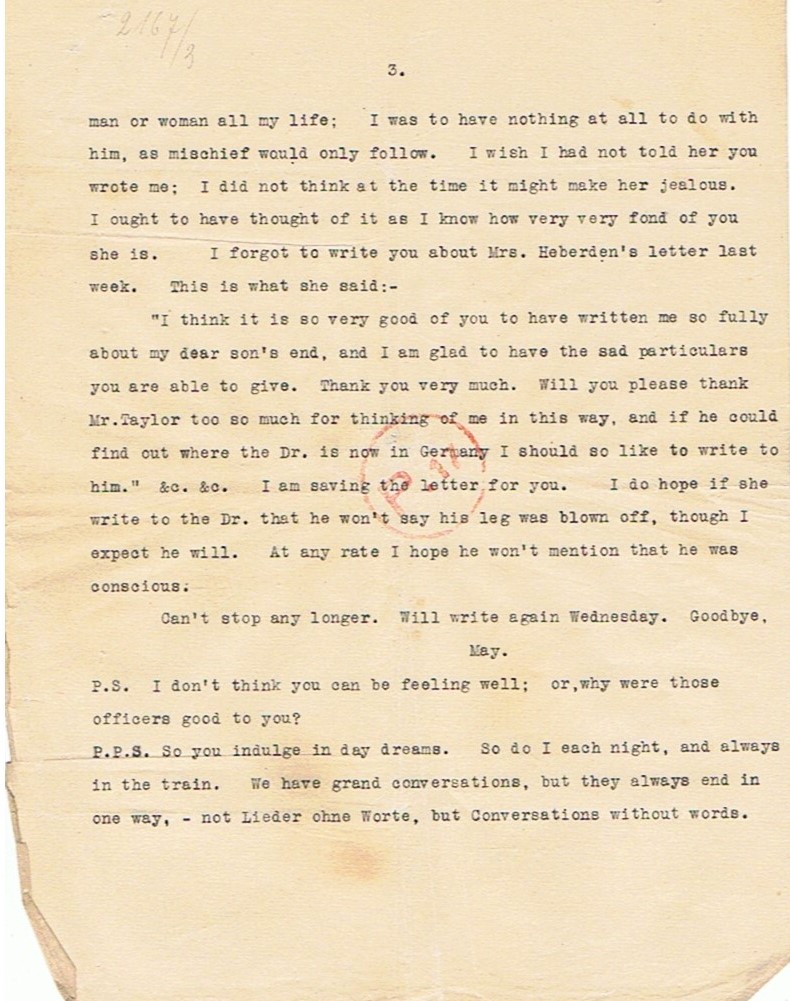 I am feeling absolutely bewildered. Well, it won’t last much longer, and I think I shall be glad when it is all over. Of course I am referring to the Sale. Another raffle this morning – a painting of Gladys Cooper signed by herself. Fetched 50/-. I did not win it; wasn’t anxious to. There is a lovely etching of Marlborough House to be raffled next, and I would like that. It is the only one of its kind, and Queen Alexandra gave the artist permission to do it. Goods still pouring in. The letters of thanks I have to write each day! Still three girls away ill, and fearfully behindhand with the work. O well, it can’t be helped. I am not going to worry. Will get the Bazaar off my chest first. Royalty will be there, so you can guess we are a bit flustered!

I am not beginning this letter at the beginning. On Saturday I went to Balham, and had a lovely dinner. How you would have enjoyed it. We despatched the various letters you enclosed, and Mrs Taylor told me to send you the enclosed cutting from the Sketch Supplement. It is a photo of Captain Campbell’s girl, and we think she looks lovely. She has beautiful neck and arms. Apparently they are getting married soon. I reckon he is to be congratulated. Miss Massey saw the picture and sent it to Mrs Taylor for you. I did not stay over the weekend after all, because Ern said he was going away as he had Saturday off. He was not up when I left home, and directly after breakfast he said he would mend his bike and then go off. He mended it, and then found another place and so on. Twice he had to go out to buy more solutions etc. When I reached home at 6.30 he was then washing his hands, having completed his work. I think he patched more than was necessary, as it was not until teatime that Ethel discovered the air was leaking at the valve, and not from the holes as he thought. He said – No, I won’t say what he said. It certainly would not pass the censor. In the evening I finished the second vest, and now I am going to start the waistcoat. On Sunday morning I planted the bulbs at the cemetery, and spent the afternoon and evening sitting over the fire. Went to bed early and had nightmares over the Bazaar.

Mrs Taylor was very pleased at receiving your letter. She had started to worry over you as she had not had any postcards or letters from you for 2 or 3 weeks. I believe she thought you were at least dead. I am wondering whether I have upset Ethel, your Ethel. You remember you wrote her a letter which I forwarded. At the same time as I thought she would wonder at my writing on the envelope I enclosed a note to say you were only allowed to send one letter of 6 pages a fortnight. I also mentioned that I had had from you a very interesting narrative of your doings while in the Army which I would be pleased to let her see; and that when I had time I wanted to type it all out, and would give her a copy if she liked. She wrote back to Mrs Day asking if it were true you could only write so little? It is a strange thing, but that palmist of ours told me to beware of a redheaded man or woman all my life; I was to have nothing at all to do with him, as mischief would only follow. I wish I had not told her you wrote me; I did not think at the time it might make her jealous. I ought to have thought of it as I know how very fond of you she is. I forgot to write you about Mrs Heberden’s letter last week. This is what she said:-

“I think it is so very good of you to have written me so fully about our dear son’s end, and I am glad to have the sad particulars you are able to give. Thank you very much. Will you please thank Mr Taylor too so much for thinking of me in this way, and if he could find out where the Dr is now in Germany I should so like to write to him.” etc etc. I am saving the letter for you. I do hope if she write to the Dr that he won’t say his leg was blown off, though I expect he will. At any rate I hope he won’t mention that he was conscious.

P.S. I don’t think you can be feeling well; or, why were those officers good to you?

P.P.S. So you indulge in day dreams. So do I each night, and always in the train. We have grand conversations, but they always end in one way, – not Lieder ohne Worte, but Conversations without words.