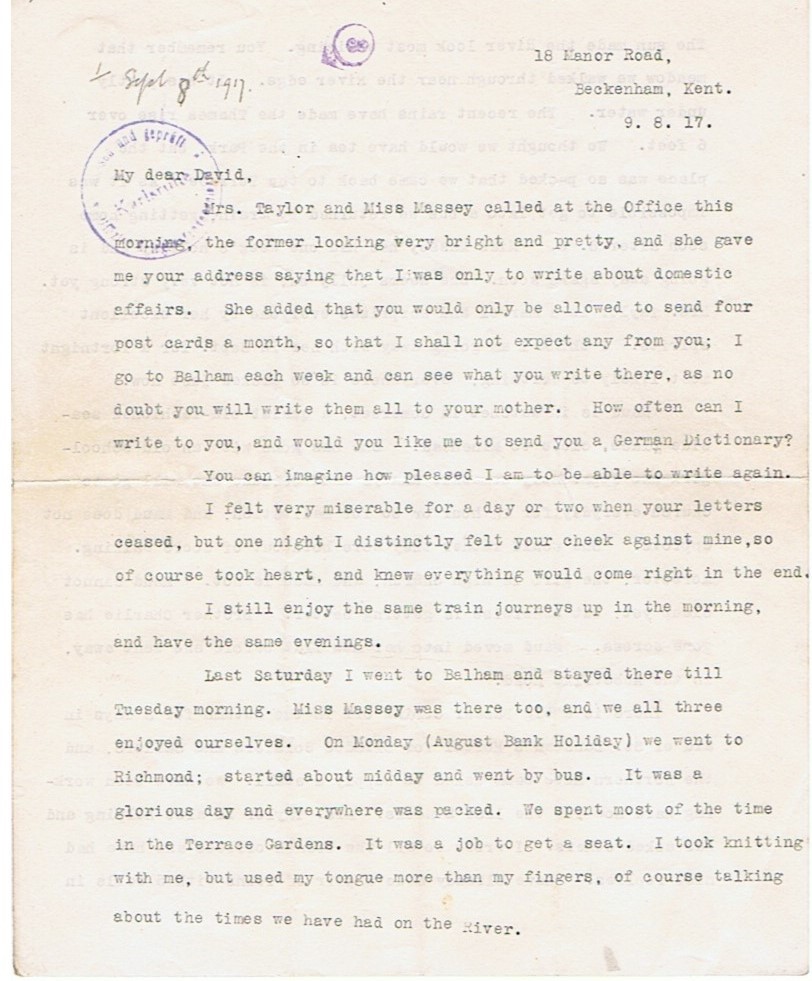 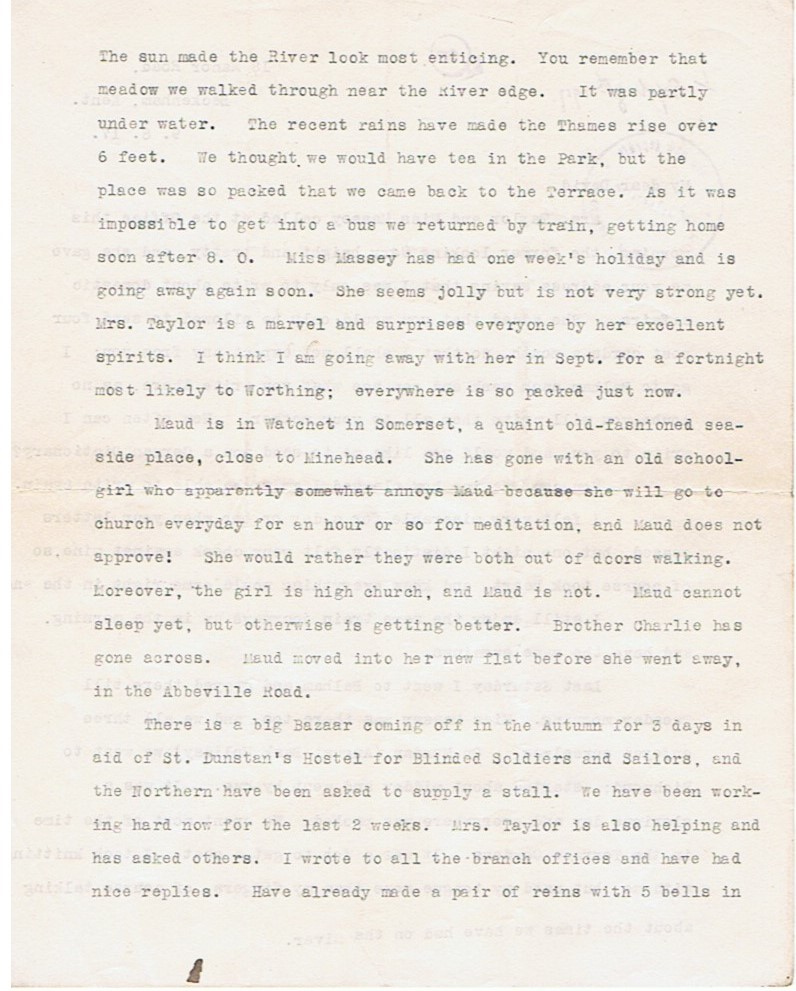 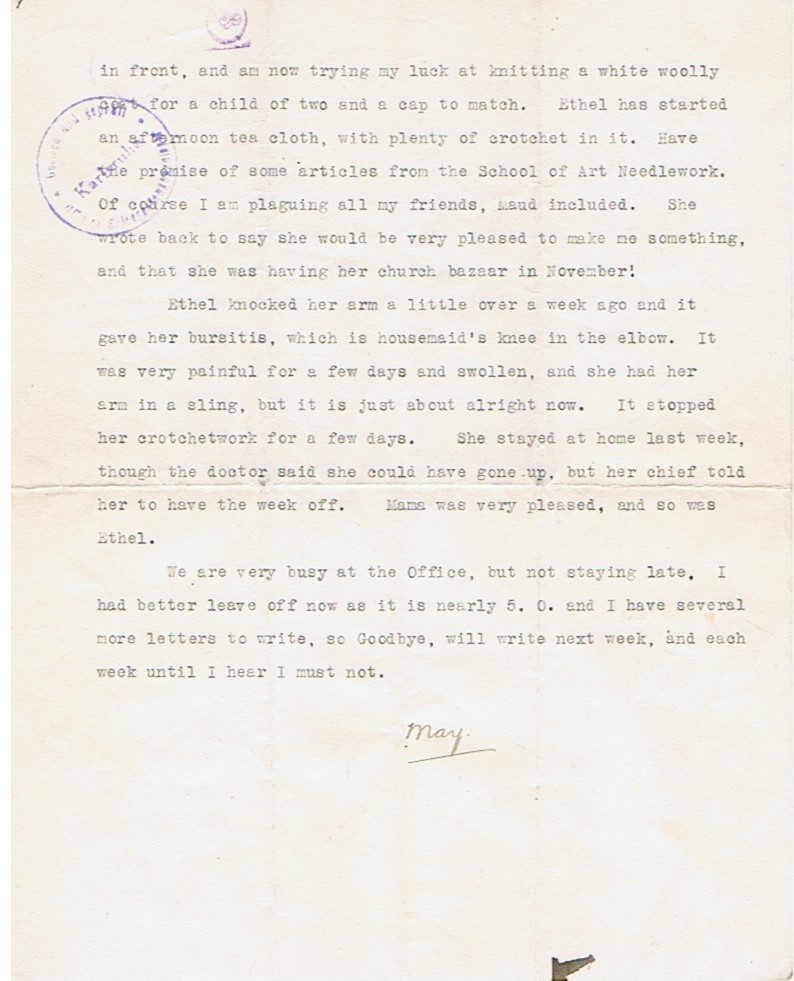 Mrs Taylor and Miss Massey called at the Office this morning, the former looking very bright and pretty, and she gave me your address saying that I was only to write about domestic affairs. She added that you would only be allowed to send four post cards a month, so that I shall not expect any from you. I go to Balham each week and can see what you write there, as no doubt you will write them all to your mother. How often can I write to you, and would you like me to send you a German Dictionary?

You can imagine how pleased I am to be able to write again.

I felt very miserable for a day or two when your letters ceased, but one night I distinctly felt your cheek against mine, so of course took heart, and knew everything would come right in the end. I still enjoy the same train journeys up in the morning, and have the same evenings.

Last Saturday I went to Balham and stayed there till Tuesday morning. Miss Massey was there too, and we all three enjoyed ourselves. On Monday (August Bank Holiday) we went to Richmond; started about midday and went by bus. It was a glorious day and everywhere was packed. We spent most of the time in the Terrace Gardens. It was a job to get a seat. I took knitting with me, but used my tongue more than my fingers, of course talking about the times we have had on the river. The sun made the River look most enticing. You remember that meadow we walked through near the river edge. It was partly under water. The recent rains have made the Thames rise over 6 feet.  We thought we would have tea in the Park, but the place was so packed that we came back to the Terrace. As it was impossible to get into a bus we returned by train, getting home soon after 8. 0.  Miss Massey has had one week’s holiday and is going away again soon. She seems jolly but is not very strong yet. Mrs. Taylor is a marvel and surprises everyone by her excellent spirits. I think I am going away with her in Sept. for a fortnight most likely to Worthing; everywhere is so packed just now.

Maud is in Watchet in Somerset, a quaint old-fashioned seaside place, close to Minehead. She has gone with an old school-girl who apparently somewhat annoys Maud because shill will go to church everyday for an hour or so for meditation, and Maud does not approve! She would rather they were both out of doors walking. Moreover, the girl is high church, and Maud is not. Maud cannot sleep yet, but otherwise she is getting better. Brother Charlie has gone across. Maud moved into new flat before she went away, in the Abbeville Road.

There is a big Bazaar coming off in the Autumn for 3 days in aid of St. Dunstan’s Hostel for Blinded Soldiers and Sailors, and the Northern have been asked to supply a stall We have been working hard now for the last 2 weeks. Mrs Taylor is also helping and has asked others. I wrote to all the branch offices and have had nice replies. Have already made a pair of reins with 5 bells in front, and am now trying my luck at knitting a white woolly coat for a child of two and a cap to match. Ethel has started an afternoon tea cloth, with plenty of crotchet in it. Have the promise of some articles from the School of Art Needlework. Of course I am plaguing; all my friends, Maud included. She wrote back to say she would be very pleased to make me something, and that she was having her church bazaar in November!

Ethel knocked her arm a little over a week ago and it gave her bursitis, which is housemaid’s knee in the elbow. It was very painful for a few days and swollen, and she had her arm in a sling, but it is just about alright now. It stopped her crotchet work for a few days. She stayed at home last week, though the Doctor said she could have gone up, but her chief told her to have the week off. Mama was very pleased, and so was Ethel.

We are very busy at the Office, but not staying late, I had better leave off now as it is nearly 5. 0. and I have several more letters to write, so Goodbye, will write next week, and each week until I hear I must not.