8th May 1918 Managing the General Manager

8th May 1918 Managing the General Manager 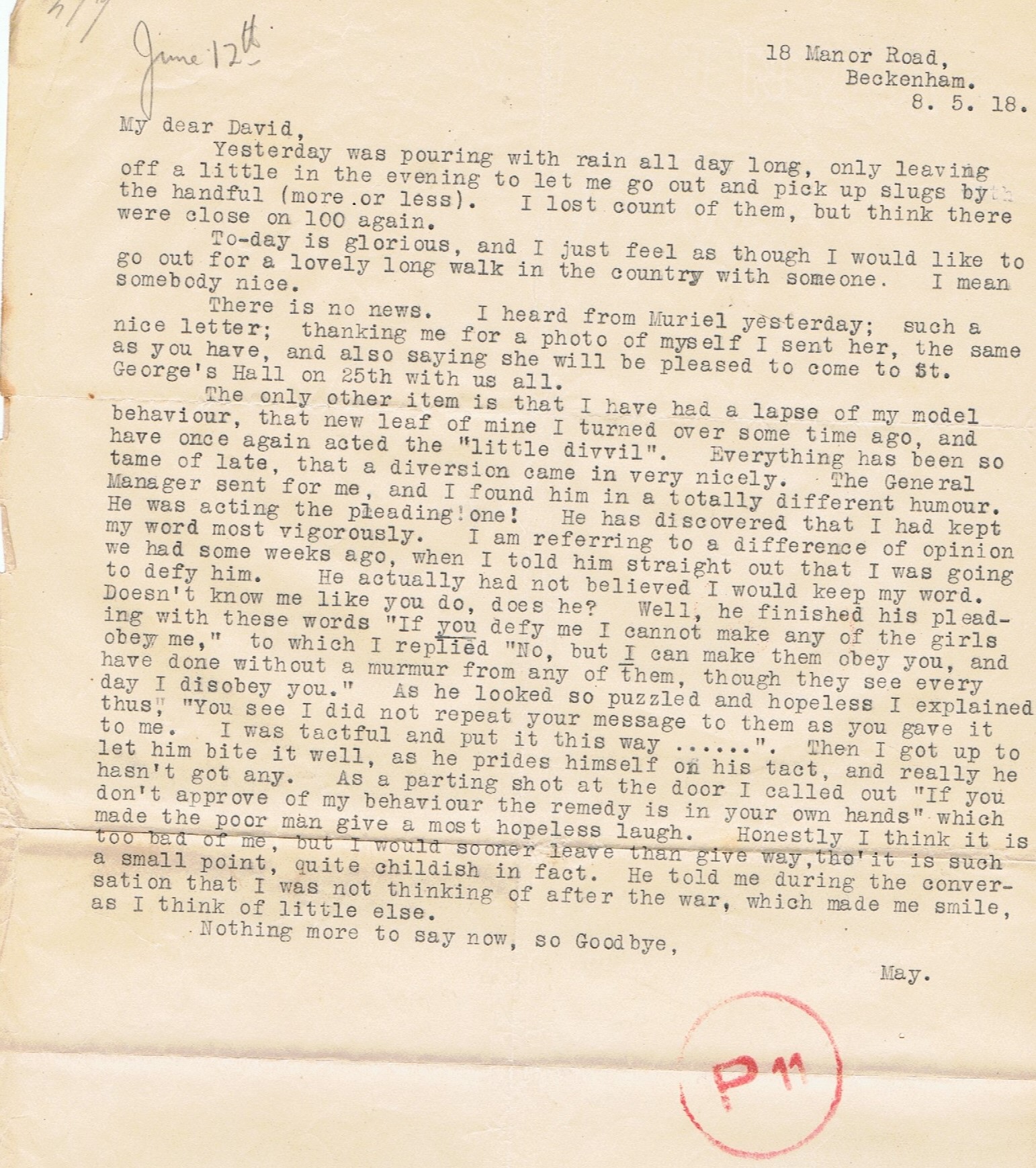 May to David Beckenham 8.5.18
My dear David,
Yesterday was pouring with rain all day, only leaving off a little in the evening to let me go out and pick up slugs by the handful (more or less). I lost count of them, but think there were close to 100 again.
Today is glorious, and I just feel as though I would like to go out for a lovely long walk in the country with someone. I mean somebody nice.
There is no news. I heard from Muriel yesterday; such a nice letter; thanking me for a photo of myself I sent her, the same as you have, and also saying she will be pleased to come to St George’s Hall on 25th with us all.
The only other item is that I have had a lapse of my model behaviour, that new leaf of mine I turned over some time ago, and have once again acted the “little divvil”. Everything has been so tame of late, that a diversion came in very nicely. The General Manager sent for me, and I found him in a totally different humour. He was acting the pleading one! He has discovered that I had kept my word most vigorously. I am referring to a difference of opinion we had some weeks ago, when I told him straight out that I was going to defy him. He actually had not believed I would keep my word. Doesn’t know me like you do, does he? Well, he finished pleading with these words “If you defy me I cannot make any of the girls obey me,” to which I replied “No, but I can make them obey you, and have done without a murmur from any of them, though they see every day I disobey you.” As he looked so puzzled and hopeless I explained thus, “You see I did not repeat your message to them as you gave it to me. I was tactful and put it this way….”. Then I got up to let him bite it well, as he prides himself on his tact, and really he hasn’t got any. As a parting shot at the door I called out “If you don’t approve of my behaviour the remedy is in your own hands” which made the poor man give me a most hopeless laugh. Honestly I think it is too bad of me, but I would sooner leave than give way, tho’ it is such a small point, quite childish in fact. He told me during the conversation that I was not thinking of after the war, which made me smile, as I think of little else.
Nothing more to say now, so Goodbye.
May