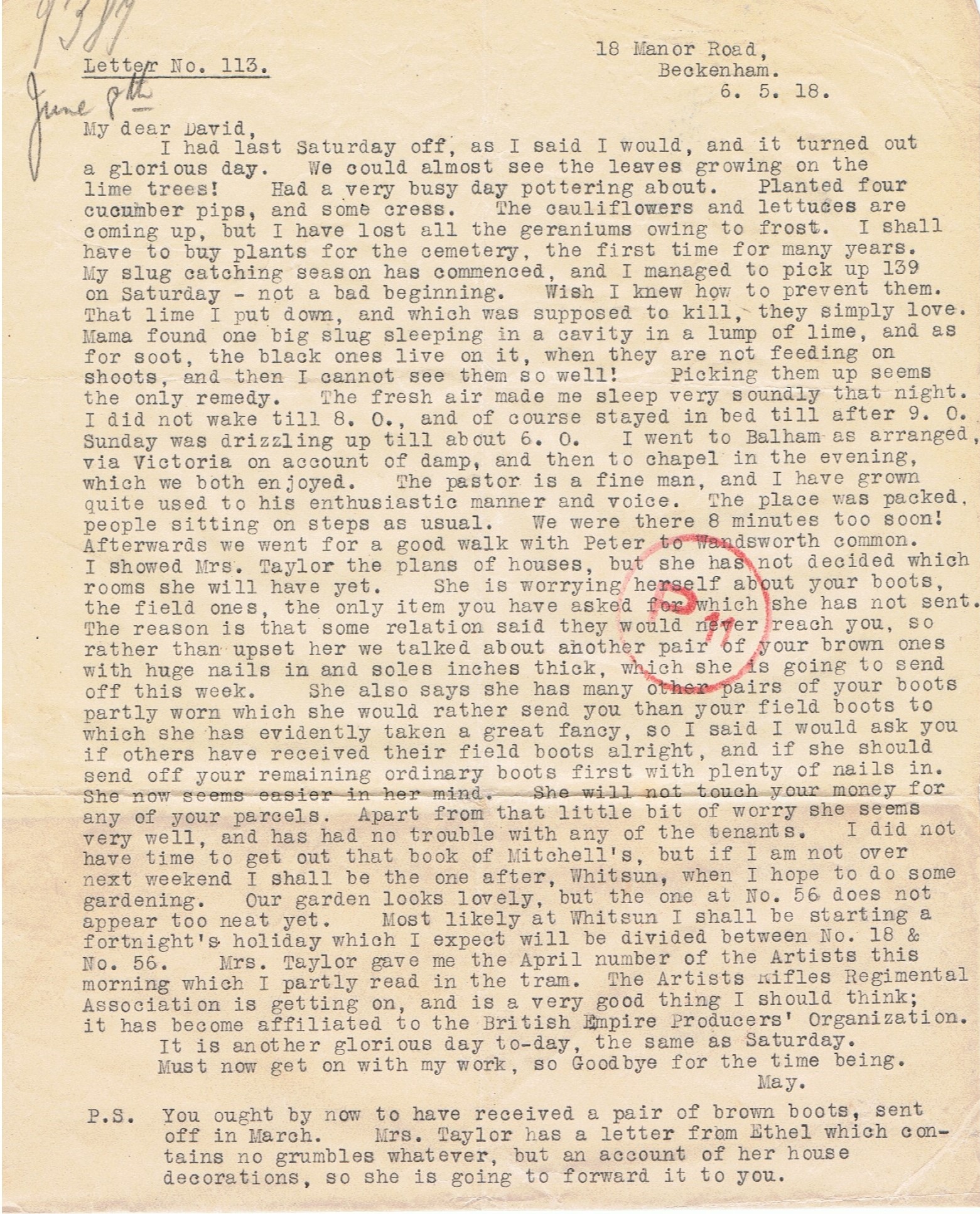 May to David Beckenham Letter No 113 6.5.18 My dear David,
I had last Saturday off, as I said I would, and it turned out a glorious day. We could almost see the leaves growing on the lime trees! Had a very busy day pottering about. Planted four cucumber pips, and some cress. The cauliflowers and lettuces are coming up, but I have lost all the geraniums owing to frost. I shall have to buy plants for the cemetery, the first time for many years. My slug hatching season has commenced, and I managed to pick up 139 on Saturday – not a bad beginning. Wish I knew how to prevent them. That lime I put down, and which was supposed to kill, they simply love. Mama found one big slug sleeping in a cavity in a lump of lime, and as for soot, the black ones live on it, when they are not feeding on shoots, and then I cannot see them so well! Picking them up seems the only remedy. The fresh air made me sleep very soundly that night. I did not wake till 8.0, and of course stayed in bed till after 9.0. Sunday was drizzling up till about 6.0. I went to Balham as arranged, via Victoria on account of damp, and then to chapel in the evening, which we both enjoyed. The pastor is a fine man, and I have grown quite used to his enthusiastic manner and voice. The place was packed, people sitting on steps as usual. We were there 8 minutes too soon! Afterwards we went for a good walk with Peter to Wandsworth Common.
I showed Mrs Taylor the plans of houses, but she has not decided which rooms she will have yet. She is worrying yourself about your boots, the field ones, the only item you have asked for which she has not sent. The reason is that some relation said they would never reach you, so rather than upset her we talked about another pair of your brown ones with huge nails in and soles inches thick, which she is going to send off this week. She also says she has many other pairs of your boots partly worn which she would rather send you than your field boots to which she has evidently taken a great fancy, so I said I would ask you if others received their field boots alright, and if she should send off your remaining ordinary boots first with plenty of nails in. She now seems easier in her mind. She will not touch your money for any of your parcels. Apart from that little bit of worry she seems very well, and has had no trouble with any of the tenants. I did not have time to get out that book of Mitchell’s, but if I am not over next weekend I shall be the one after, Whitsun, when I hope to do some gardening. Our garden looks lovely, but the one at No 56 does not appear too neat yet. Most likely at Whitsun I shall be starting a fortnight’s holiday which I expect will be divided between No 18 & No 56. Mrs Taylor gave me the April number of the Artists this morning which I partly read in the tram. The Artists Rifles Regimental Association is getting on, and is a very good thing I should think; it has become affiliated to the British Empire Producers’ Organization.
It is another glorious day today, the same as Saturday.
Must get on now with my work, so Goodbye for the time being.
May
PS You ought by now to have received a pair of brown boots, sent off in March. Mrs Taylor has a letter from Ethel which contains no grumbles whatsoever, but an account of her house decorations, so she is going to forward it to you.