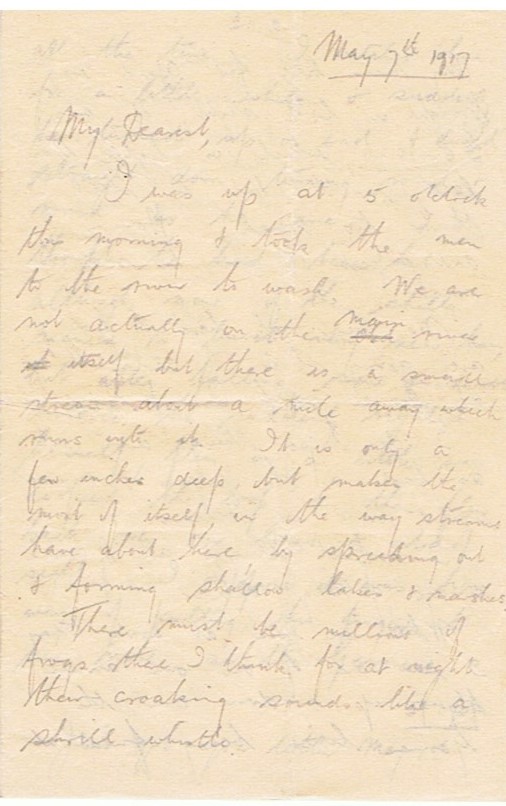 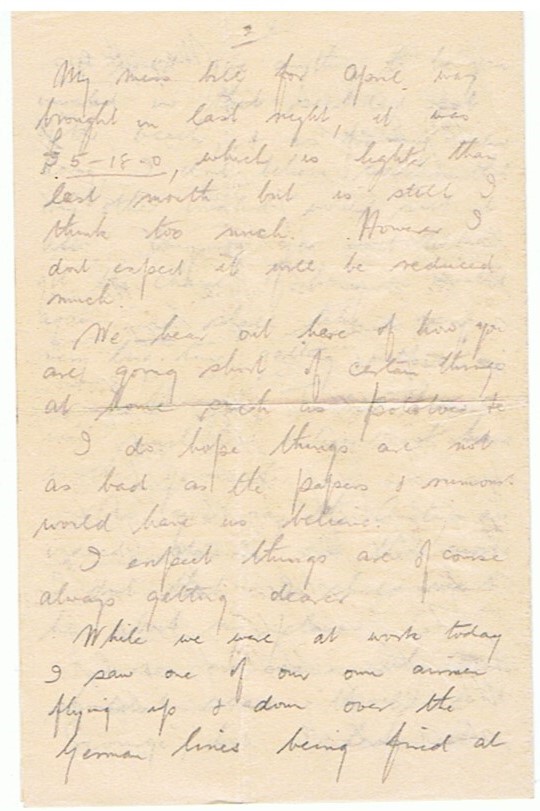 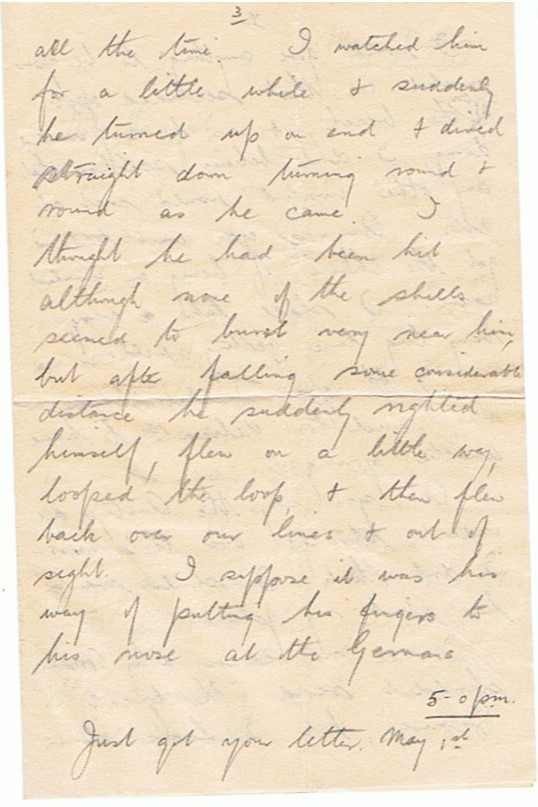 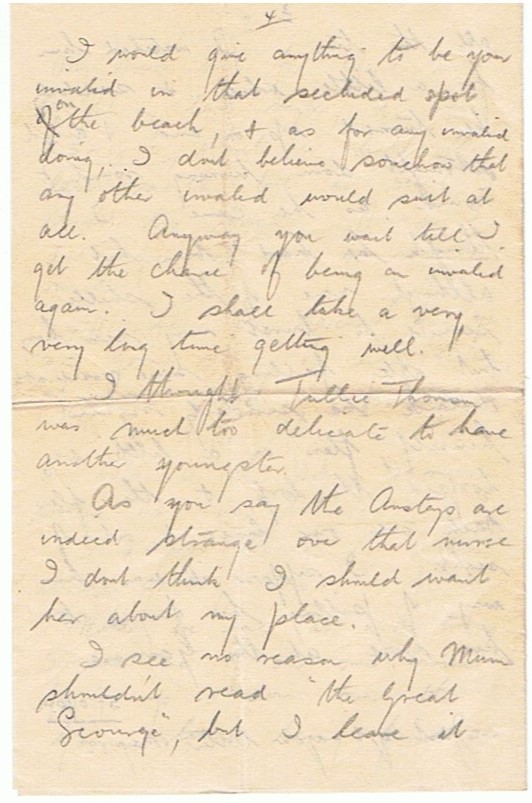 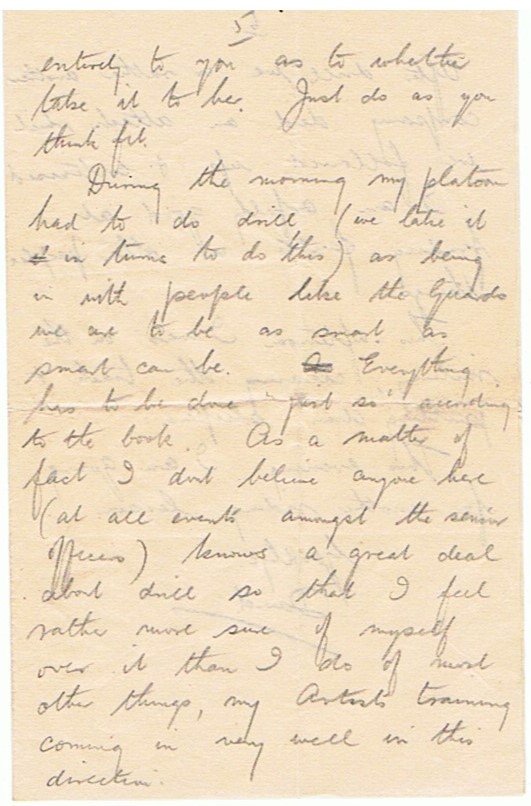 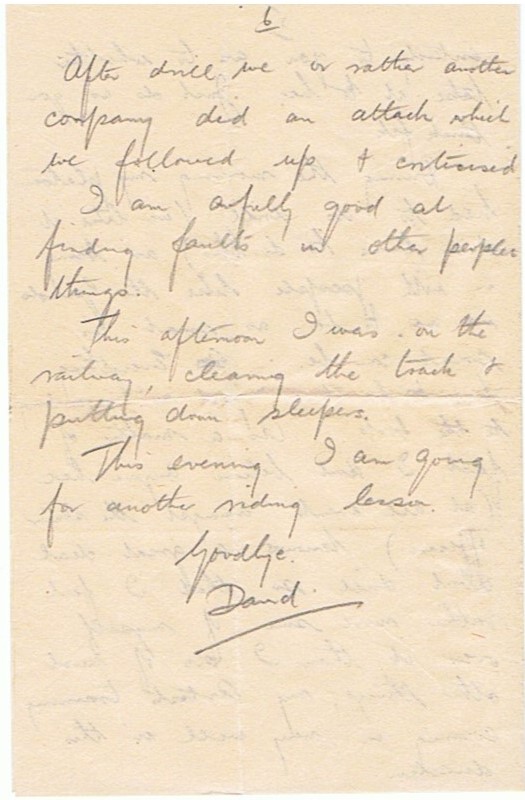 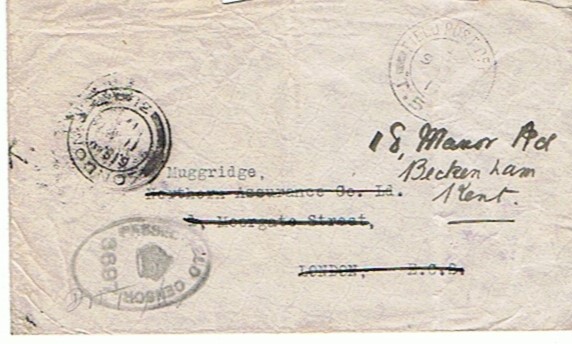 I was up at 5 o’clock this morning and took the men to the river to wash. We are not actually on the main river itself but there is a small stream about a mile away which runs into it. It is only a few inches deep but makes the most of itself, in the way streams have about here, by spreading out and forming shallow lakes and marshes.

There must be millions of frogs there I think for at night their croaking sounds like a shrill whistle.

My mess bill for April was brought in last night, it was £5-18-0, which is lighter than last month but is still I think too much. However I don’t expect it will be reduced much.

We hear out here how you are going short of certain things at home such as potatoes etc.

I do hope things are not as bad as the papers and rumours would have us believe.

I expect things are of course always getting dearer.

While we were at work today I saw one of our own airmen flying up and down over the German lines being fired at all the time. I watched him for a little while and suddenly he turned up on end and dived straight down turning round and round as he came. I thought he had been hit although more of the shells seemed to burst very near him, but after falling some considerable diatnce he suddenly righted himself, flew on a little way, looped the loop, and then flew back over our lines and out of sight. I suppose it was his way of putting his fingers to his nose at the Germans.

Just got your letter May 1st. I would give anything to be your invalid in that secluded spot on the beach, and as for any invalid doing, I don’t believe somehow that any other invalid would suit at all. Anyway you wait till I get the chance of being an invalid again. I shall take a very, very long time getting well.

I thought I thought Tullie Thomson was much too delicate to have another youngster.

As you say the Ansteys are indeed strange over that nurse. I don’t think I should want her about my place.

I see no reason why Mum shouldn’t read “The Great Scourge”, but I leave it entirely to you as to whether take it to her. Just do as you think fit.

During the morning my platoon had to do drill (we take it in turns to do this) as being in with people like the Guards we are to be as smart as smart can be. Everything has to be done “just so” according to the book. As a matter of fact I don’t believe anyone here (at all events amongst the senior officers) knows a great deal about drill so that I feel rather more sure of myself over it than I do of most other things, my Artists training coming in very well in this direction.

After drill we or rather another company did an attack which we followed up and criticised.

I am awfully good at finding faults with other peoples things.

This afternoon I was on the railway, cleaning the track and putting down sleepers.

This evening I am going for another riding lesson.