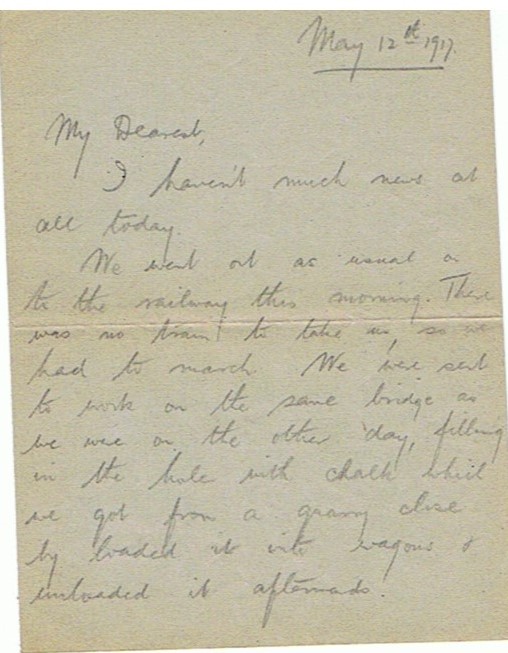 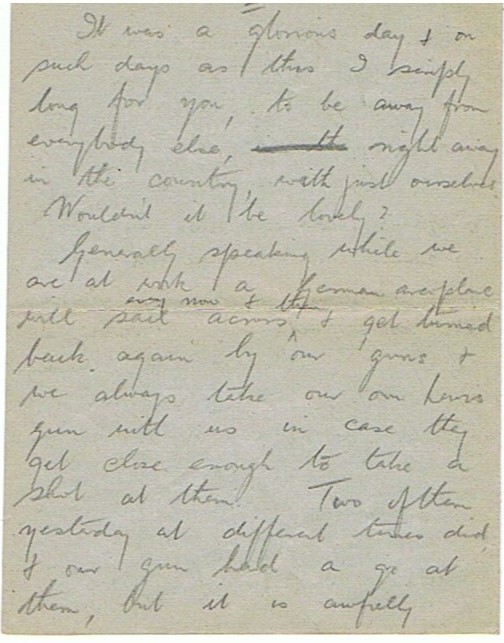 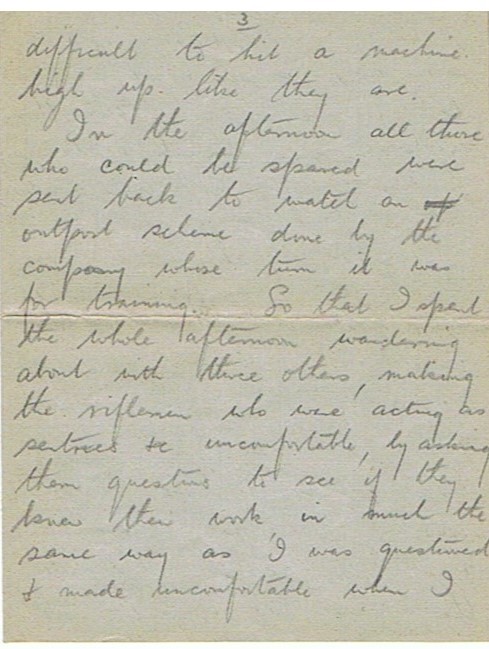 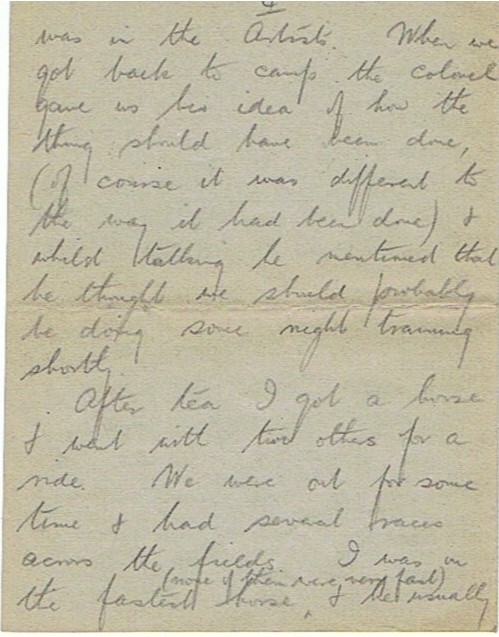 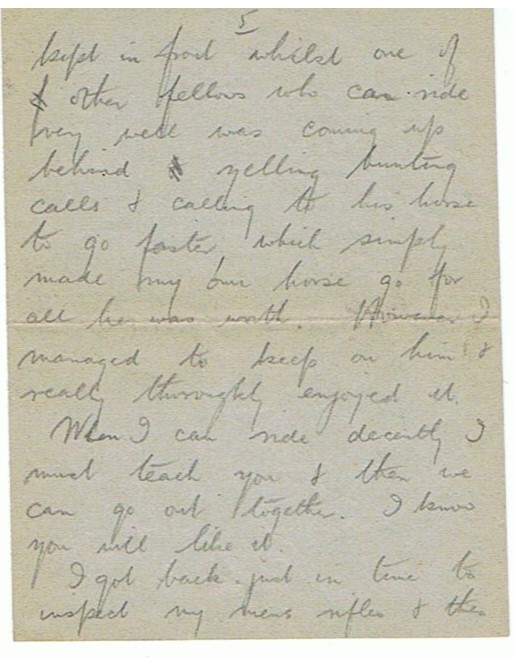 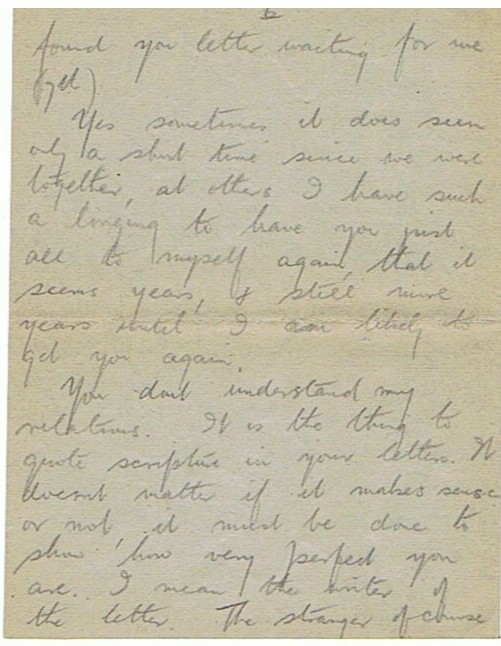 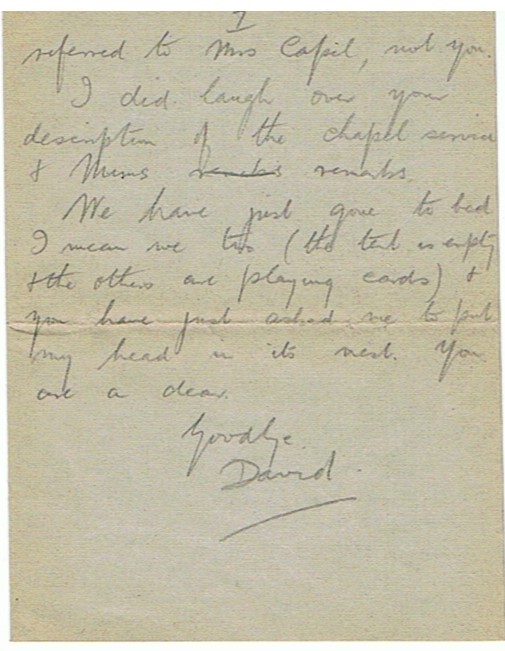 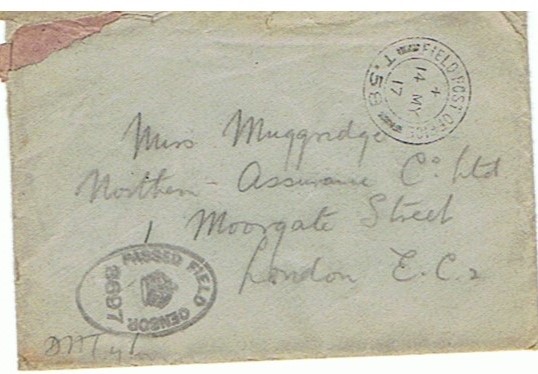 I haven’t much news at all today.

We went out as usual on to the railway this morning. There was no train to take us, so we had to march. We were sent to work on the same bridge as we were on the other day, filling in the hole with chalk which we got from a quarry close by loaded it into wagons and unloaded it afterwards.

It was a glorious day and on such days as this I simply long for you, to be away from everybody else, right away in the country, with just ourselves. Wouldn’t it be lovely?

Generally speaking while we are at work a German aeroplane will sail across every now and then and get turned back again by our guns and we always take our own Lewis gun with us in case they get close enough to take a shot at them. Two of them yesterday at different times did, and our gun had a go at them, but it is awfully difficult to hit a machine high up like they are.

In the afternoon all those who could be spared were sent back to watch an outpost scheme done by the company whose turn it was for training. So that I spent the whole afternoon wandering about with three others, making the riflemen who were acting as sentries etc. uncomfortable, by asking them questions to see if they knew their work in much the same way as I was questioned and made uncomfortable when I was in the Artists. When we got back to camp the colonel gave us his idea of how the thing should have been done (of course it was different to the way it had been done), and whilst talking he mentioned that he thought we should probably be doing some night training shortly.

After tea I got a horse and went with two others for a ride. We were out for some time and had several races across the fields. I was on the fastest horse (none of them were very fast), and he usually kept in front whilst one of the other fellows who can ride very well was coming up behind yelling hunting calls and calling to his horse to go faster, which simply made my own horse go for all he was worth. However, I managed to keep on him and really thoroughly enjoyed it.

When I can ride decently I must teach you and then we can go out together. I know you will like it.

I got back just in time to inspect my men’s rifles and then found your letter waiting for me (7th).

Yes sometimes it does seem only a short time since we were together, at others I have such a longing to have you just all to myself again, that it seems years, and still more years until I am likely to get you again.

You don’t understand my relations. It is the thing to quote scripture in your letters. It doesn’t matter if it makes sense or not, it must be done to show how very perfect you are. I mean the writer of the letter. The stranger of course referred to is Miss Capel, not you.

I did laugh over your description of the chapel service and Mum’s remarks.

We have just gone to bed, I mean we two (the tent is empty and the others are playing cards)) and you have just asked me to put my head in its nest. You are a dear.