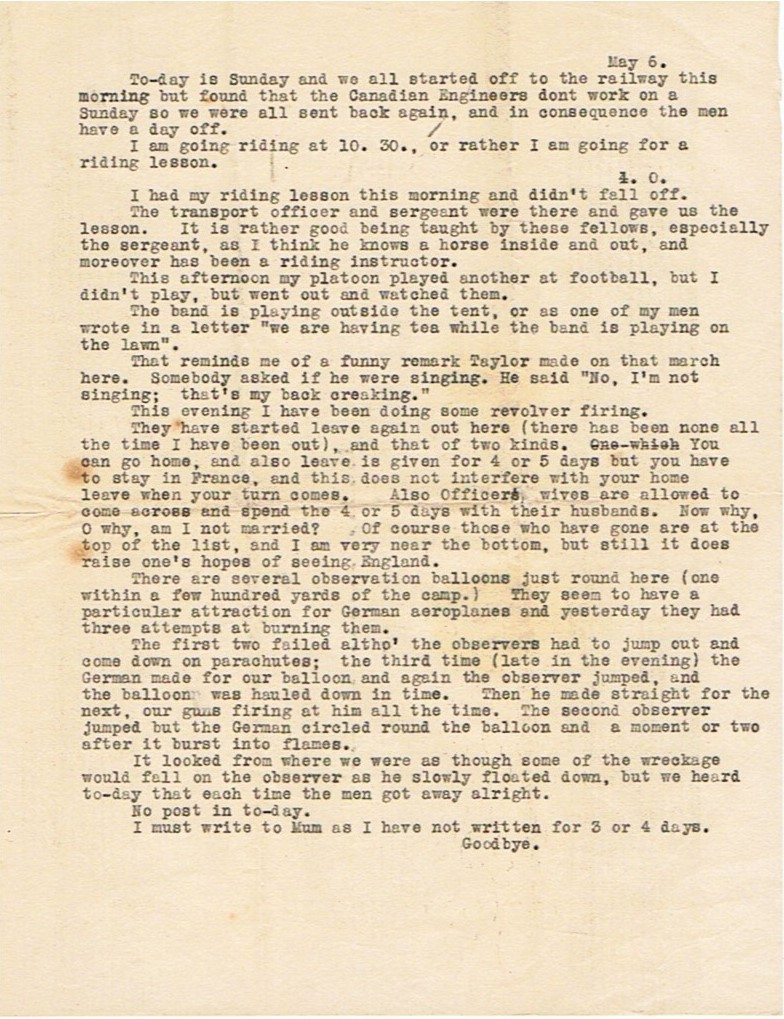 To-day is Sunday and we all started off to the railway this morning but found that the Canadian Engineers don’t work on a Sunday so we were all sent back again, and in consequence the men have a day off.

I had my riding lesson this morning and didn’t fall off.

The transport officer and sergeant were there and gave us the lesson. It is rather good being taught by these fellows, especially the sergeant, as I think he knows a horse inside and out, and moreover has been a riding instructor.

This afternoon my platoon played another at football, but I didn’t play, but went out and watched them.

That reminds me of a funny remark Taylor made on that march here. Somebody asked if he were singing. He said “No, I’m not singing; that’s my back creaking.”

This evening I have been doing some revolver firing.

They have started leave again out here (there has been none all the time I have been out), and that of two kinds. You can go home, and also leave, is given for 4 or 5 days but you have to stay in France, and this does not interfere with your home leave when your turn comes. Also Officer’s wives are allowed to come across and spend 4 or 5 days with their husbands. Now why, 0 why, am I not married? Of course those who have gone are at the top of the list, and I am very near the bottom, but still it does raise one’s hopes of seeing England.

There are several observation balloons just round here (one within a few hundred yards of the camp.) They seem to have a particular attraction for German aeroplanes and yesterday they had three attempts at burning them.

The first two failed altho’ the observers had to jump out and come down on parachutes; the third time (late in the evening) the German made for our balloon; and again the observer jumped, and the balloon, was hauled down in time. Then he made straight for the next, our guns firing at him all the time. The second observer jumped but the German circled round the balloon and a moment or two after it burst into flames.

It looked from where we were as though some of the wreckage would fall on the observer as he slowly floated down, but we heard to-day that each time the men got away alright.

I must write to Mum as I have not written for 3 or 4 days. Goodbye.