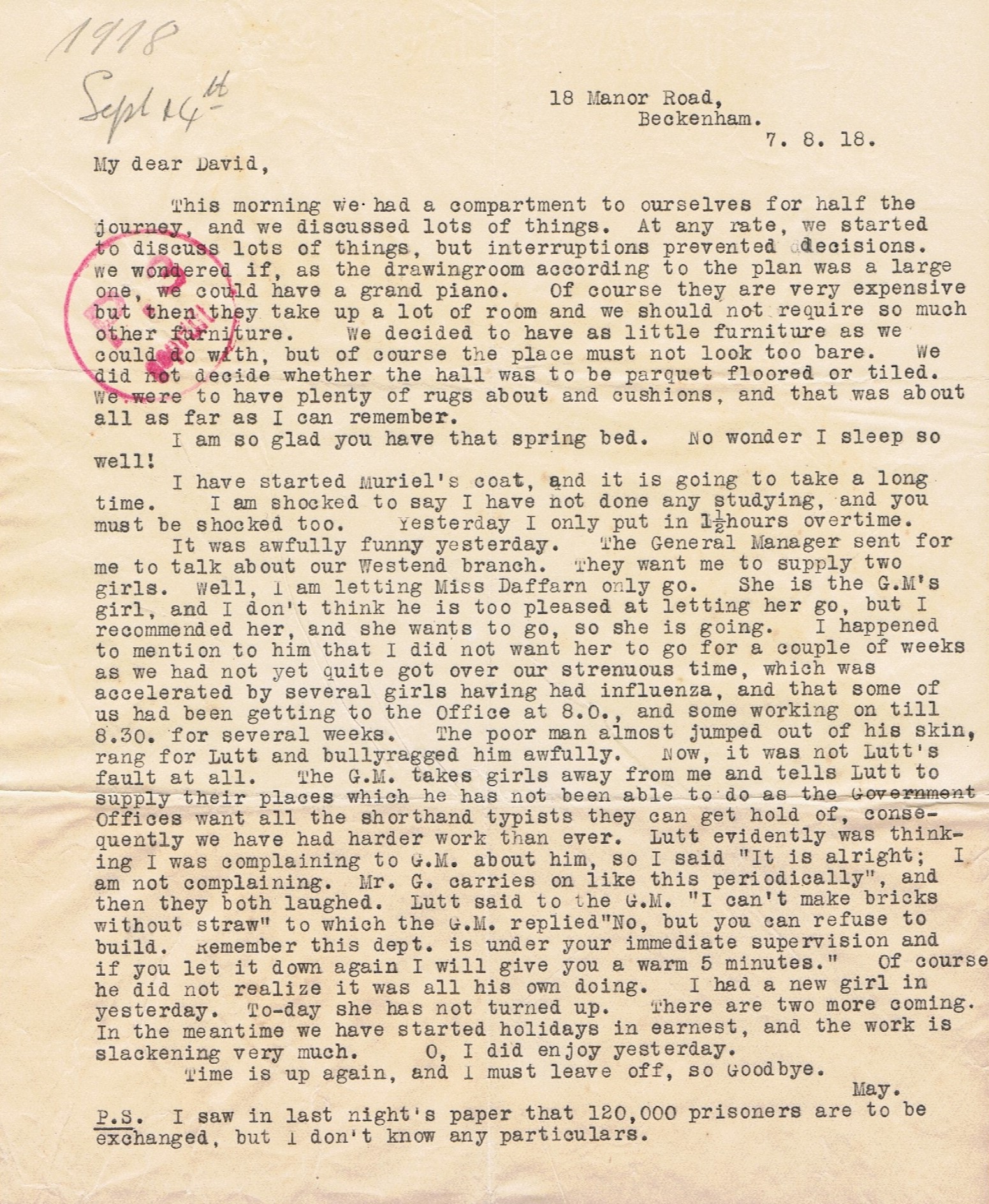 May to David Beckenham 7.8.18
My dear David,
This morning we had a compartment to ourselves for half the journey, and we discussed lots of things. At any rate, we started to discuss lots of things, but interruptions prevented decisions. We wondered if, as the drawing room according to the plan was a large one, we could have a grand piano. Of course they are very expensive but then they take up a lot of room and we should not require so much other furniture. We decided to have as little furniture as we could do with, but of course the place must not look too bare. We did not decide whether the hall was to be parquet floored or tiled. We were to have plenty of rugs about and cushions, and that was about all as far as I can remember.
I am so glad that you have that spring bed. No wonder I sleep so well!
I have started Muriel’s coat, and it is going to take a long time. I am shocked to say I have not done any studying, and you must be shocked too. Yesterday I only put in 1 ½ hours overtime.
It was awfully funny yesterday. The General Manager sent for me to talk about our Westend branch. They want me to supply two girls. Well, I am letting Miss Daffarn only go. She is the G.M.’s girl, and I don’t think he is too pleased at letting her go, but I recommended her, and she wants to go, so she is going. I happened to mention to him that I did not want her to go for a couple of weeks as we had not yet quite got over our strenuous time, which was accelerated by several girls having influenza, and that some of us had been getting to the Office at 8.0, and some working on till 8.30 for several weeks. The poor man almost jumped out of his skin, rang for Lutt and bullyragged him awfully. Now, it was not Lutt’s fault at all. The G.M. takes girls away from me and tells Lutt to supply their places which he has not been able to do as the Government Offices want all the shorthand typists they can get hold of, consequently we have had harder work than ever. Lutt evidently was thinking I was complaining to G.M. about him, so I said “It is alright; I am not complaining. Mr G carries on like this periodically”, and then they both laughed. Lutt said to the G.M. “I can’t make bricks without straw” to which the G.M. replied “No, but you can refuse to build. Remember this dept is under your immediate supervision and if you let it down again I will give you a warm 5 minutes.” Of course he did not realize it was all his own doing. I had a new girl in yesterday. To-day she did not turn up. There are two more coming. In the meantime we have started holidays in earnest, and the work is slackening very much. O, I did enjoy yesterday.
Time is up again, and I must leave off, so Goodbye.
May
PS I saw in last night’s paper that 120,000 prisoners are to be exchanged, but I don’t know any particulars.