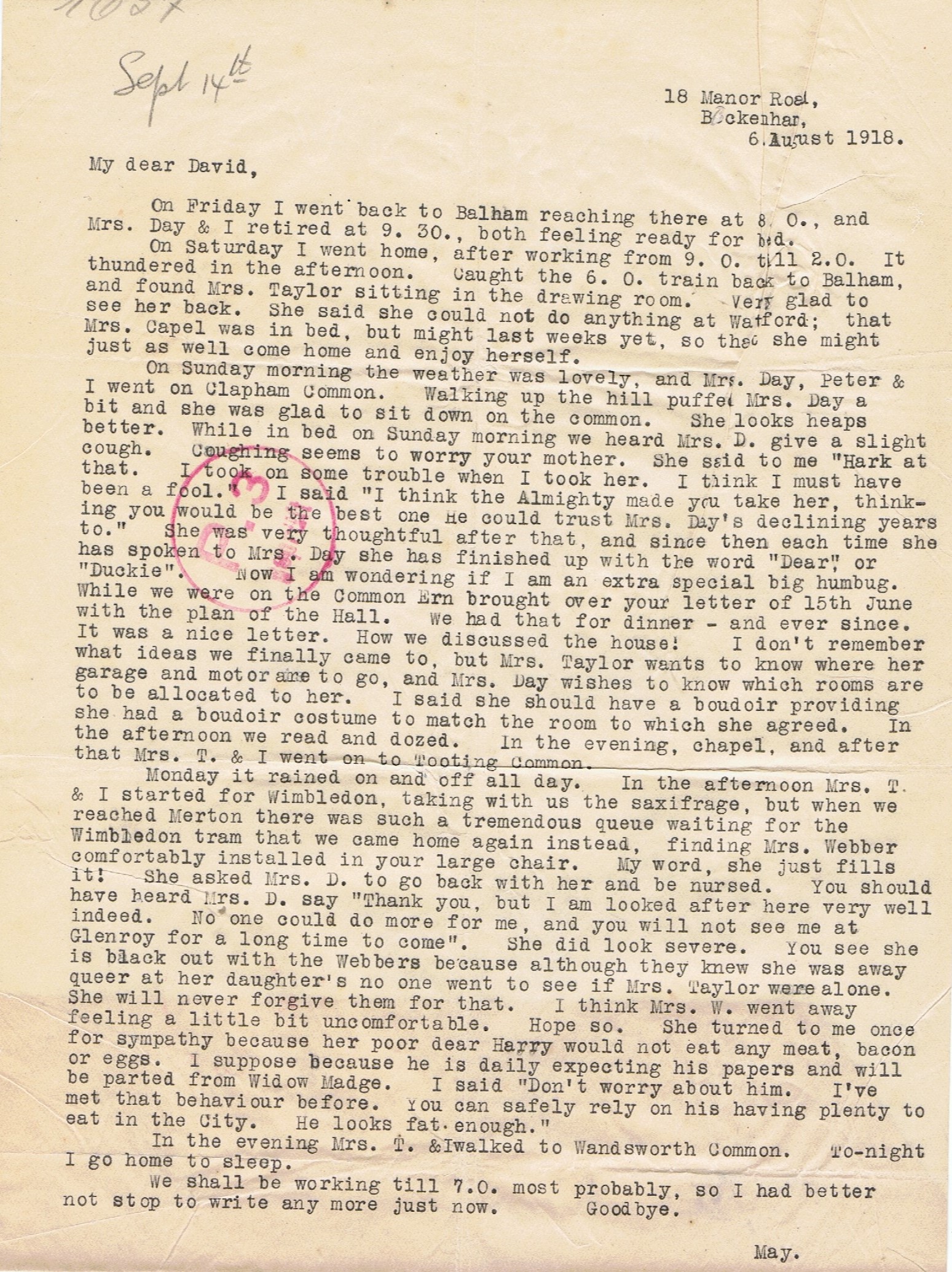 May to David Beckenham 6 August 1918
My dear David,
On Friday I went back to Balham reaching there at 8.0, and Mrs Day & I retired at 9.30, both feeling ready for bed.
On Saturday I went home, after working from 9.0 til 2.0. It thundered in the afternoon. Caught the 6.0 train back to Balham, and found Mrs Taylor sitting in the drawing room. Very glad to see her back. She said she could not do anything at Watford; that Mrs Capel was in bed, but might last weeks yet, so that she might just as well come home and enjoy herself.
On Sunday morning the weather was lovely, and Mrs Day, Peter & I went on Clapham Common. Walking up the hill puffed Mrs Day a bit and she was glad to sit down on the common. She looks heaps better. While in bed on Sunday morning we heard Mrs D give a slight cough. Coughing seems to worry your mother. She said to me “Hark at that. I took on some trouble when I took her. I think I must have been a fool.” I said “I think the Almighty made you take her, thinking you would be the best one He could trust Mrs Day’s declining years to.” She was very thoughtful after that, and since then each time she has spoken to Mrs Day she has finished up with the word “Dear”, or “Duckie”. Now I am wondering if I am an extra special big humbug. While we were on the Common Ern brought over your letter of 15th June with the plan of the Hall. We had that for dinner – and ever since. It was a nice letter. How we discussed the house! I don’t remember what ideas we finally came to, but Mrs Taylor wants to know where her garage and motor are to go, and Mrs Day wishes to know which rooms are to be allocated to her. I said she should have a boudoir providing she had a boudoir costume to match the room to which she agreed. In the afternoon we read and dozed. In the evening, chapel, and after that Mrs T & I went on to Tooting Common.
Monday it rained on and off all day. In the afternoon Mrs T & I started for Wimbledon, taking with us the saxifrage, but when we reached Merton there was such a tremendous queue waiting for the Wimbledon tram that we came home instead, finding Mrs Webber comfortably installed in your large chair. My word, she just fills it! She asked Mrs D to go back with her and be nursed. You should have heard Mrs D say “Thank you, but I am looked after here very well indeed. No one could do more for me, and you will not see me at Glenroy for a long time to come”. She did look severe. You see she is black out with the Webbers because although they knew she was away queer at her daughter’s no one went to see if Mrs Taylor were alone. She will never forgive them for that. I think Mrs W went away feeling a little bit uncomfortable. Hope so. She turned tp me once for sympathy because her poor dear Harry would not eat any meat, bacon or eggs. I suppose because he is daily expecting his papers and will be parted from Widow Madge. I said “Don’t worry about him. I’ve met that behaviour before. You can safely rely on his having plenty to eat in the City. He looks fat enough.”
In the evening Mrs T & I walked to Wandsworth Common. To-night I go home to sleep.
We shall be working till 7.0 most probably, so I had better not stop to write any more just now. Goodbye.
May