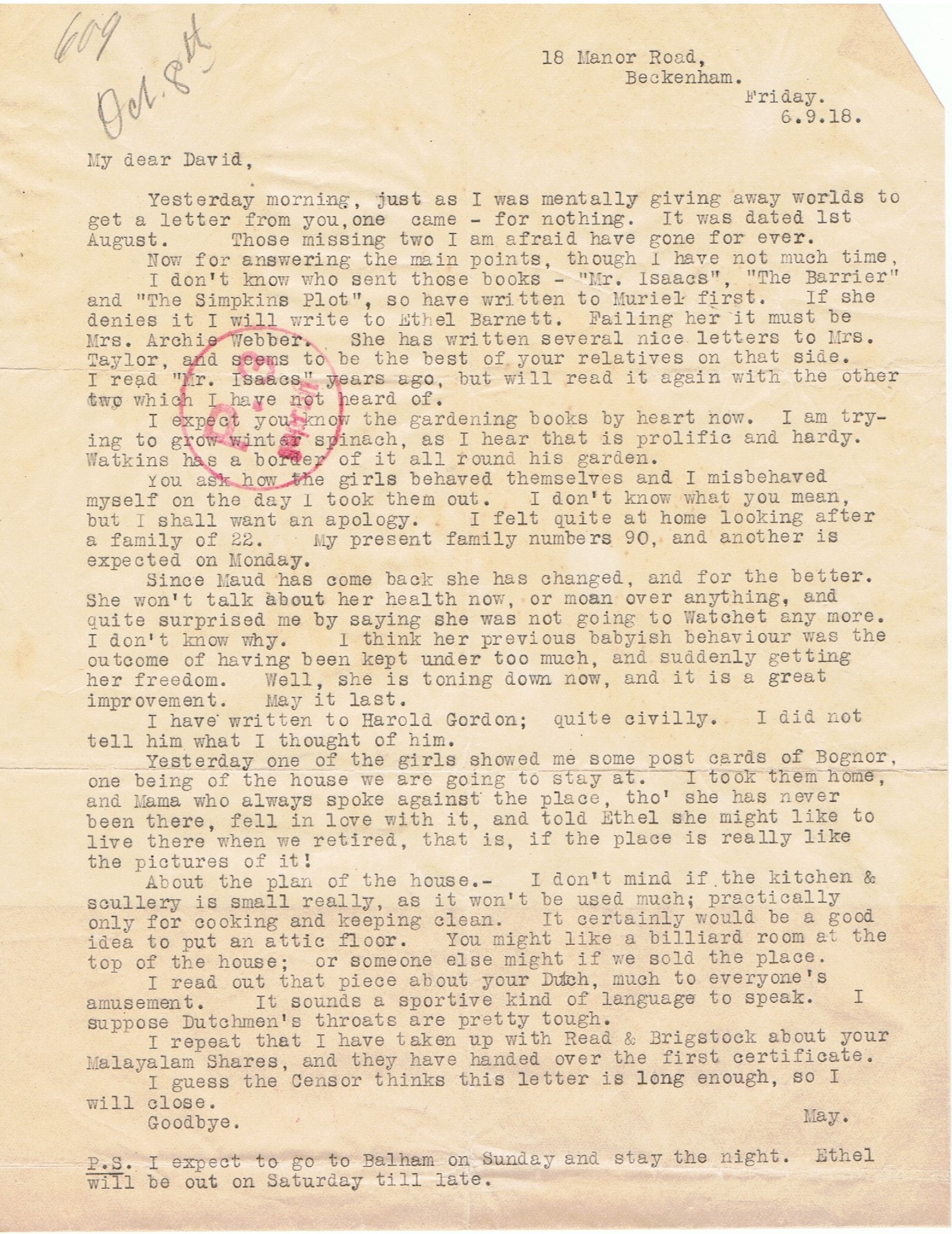 May to David Beckenham 6.9.18
My dear David,
Yesterday morning, just as I was mentally giving away worlds to get a letter from you, one came – for nothing. It was dated 1st August. Those missing two I am afraid have gone for ever.
Now for answering the main points, though I have not much time.
I don’t know who sent those books – “Mr Isaacs”, “The Barrier” and “The Simpkins Plot”, so have written to Muriel first. If she denies it I will write to Ethel Barnett. Failing her it must be Mrs Archie Webber. She has written several nice letters to Mrs Taylor, and seems to be the best of your relatives on that side. I read “Mr Isaacs” years ago, but will read it again with the other two which I have not heard of.
I expect you know the gardening books by heart now. I am trying to grow winter spinach, as I hear that it is prolific and hardy. Watkins has a border of it all round his garden.
You ask how the girls behaved themselves and I misbehaved myself on the day I took them out. I don’t know what you mean, but I shall want an apology. I felt quite at home looking after a family of 22. My present family numbers 90, and another is expected Monday.
Since Maud has come back she has changed, and for the better. She won’t talk about her health now, or moan over anything, and quite surprised me by saying she was not going to Watchet any more. I don’t know why. I think her previous babyish behaviour was the outcome of having been kept under too much, and suddenly getting her freedom. Well, she is toning down now, and it is a great improvement. May it last.
I have written to Harold Gordon; quite civilly. I did not tell him what I thought of him.
Yesterday one of the girls showed me some post cards of Bognor, one being of the house we are going to stay at. I took them home, and Mama who always spoke against the place, tho’ she has never been there, fell in love with it, and told Ethel she might like to live there when we retired, that is, if the place is really like the pictures of it!
About the plan of the house. – I don’t mind if the kitchen & scullery is small really, as it won’t be used much; practically only for cooking and keeping clean. It certainly would be a good idea to put an attic floor. You might like a billiard room at the top of the house; or someone else might if we sold the place.
I read out that piece about your Dutch, much to everyone’s amusement. It sounds a sportive kind of language to speak. I suppose Dutchmen’s throats are pretty tough.
I repeat that I have taken up with Read & Brigstock about your Malayalam Shares, and they have handed over the first certificate.
I guess the Censor thinks this letter is long enough, so I will close.
Goodbye.
May
PS I expect to go to Balham on Sunday and stay the night. Ethel will be out on Saturday till late.