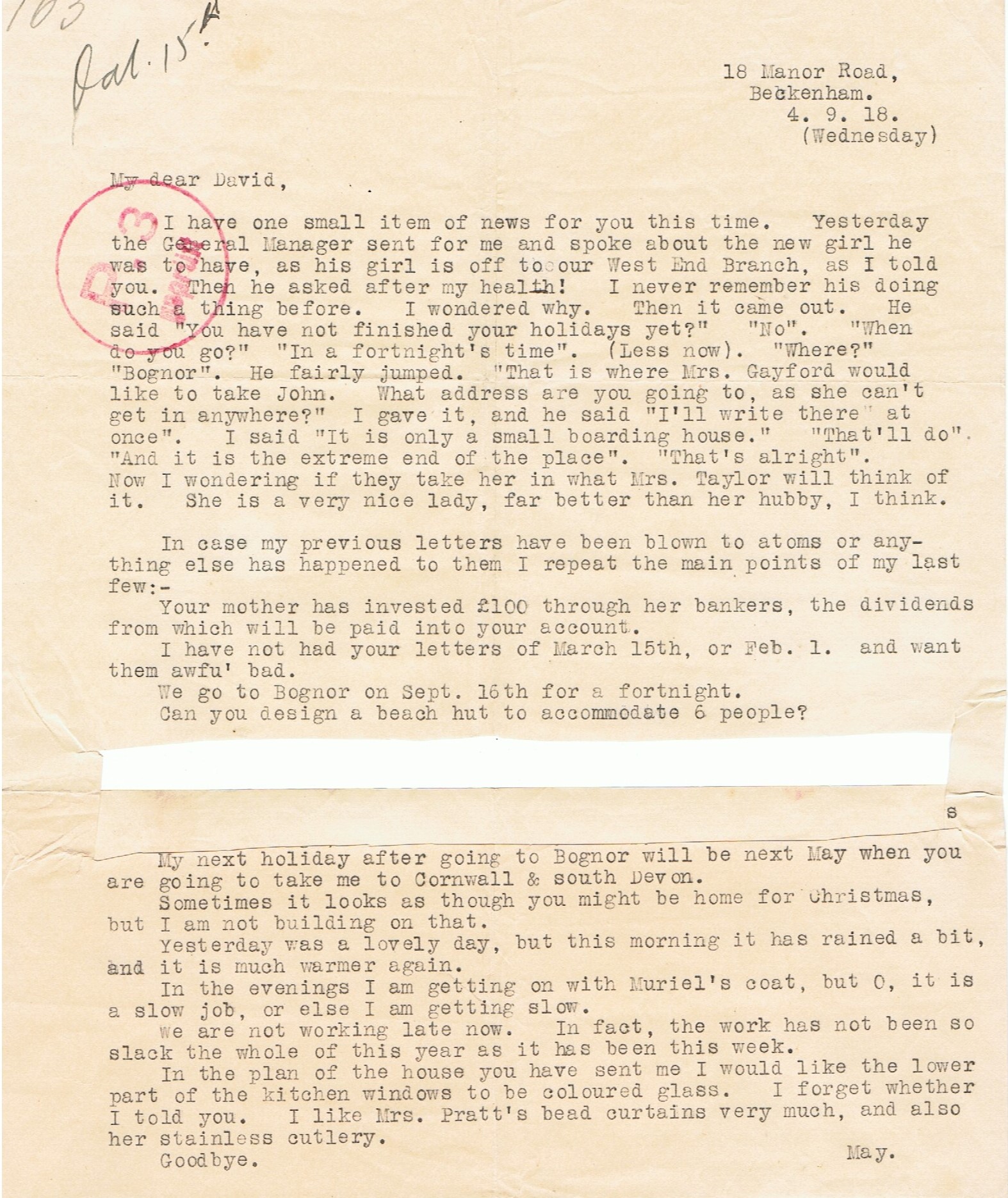 May to David Beckenham 4.9.18 (Wednesday)
My dear David,
I have one small item of news for you this time. Yesterday the General Manager sent for me and spoke about the new girl he was to have, as his girl is off to our West End Branch, as I told you. Then he asked after my health! I never remember his doing such a thing before. I wondered why. Then it came out. He said “You have not finished your holidays yet?” “No”. “When do you go?” “In a fortnight’s time”. (less now). “Where?” “Bognor”. He fairly jumped. “That is where Mrs Gayford would like to take John. What address are you going to, as she can’t get anywhere?” I gave it, and he said “I’ll write there at once”. I said “It is only a small boarding house.” “That’ll do”. “And it is at the extreme end of the place”. “That’s alright”. Now I wondering if they take her in what Mrs Taylor will think of it. She is a very nice lady, far better than her hubby, I think.
In case my previous letters have been blown to atoms or anything else has happened to them I repeat the main points of my last few:-
Your mother has invested £100 through her bankers, the dividends from which will be paid into your account.
I have not had your letters of March 15th, or Feb 1 and want them awfu’ bad.
We go to Bognor on Sept 16th for a fortnight.
Can you design a beach hut to accommodate 6 people?[part of letter cut by censor] My next holiday after going to Bognor will be next May when you are going to take me to Cornwall & south Devon.
Sometimes it looks as though you might be home for Christmas, but I am not building on that.
Yesterday was a lovely day, but this morning it has rained a bit, and it is much warmer again.
In the evenings I am getting on with Muriel’s coat, but O, it is a slow job, or else I am getting slow.
We are not working late now. In fact, the work has not been so slack the whole of this year as it has been this week.
In the plan of the house you have sent me I would like the lower part of the kitchen windows to be coloured glass. I forget whether I told you. I like Mrs Pratt’s bead curtains very much, and also her stainless cutlery.
Goodbye.
May