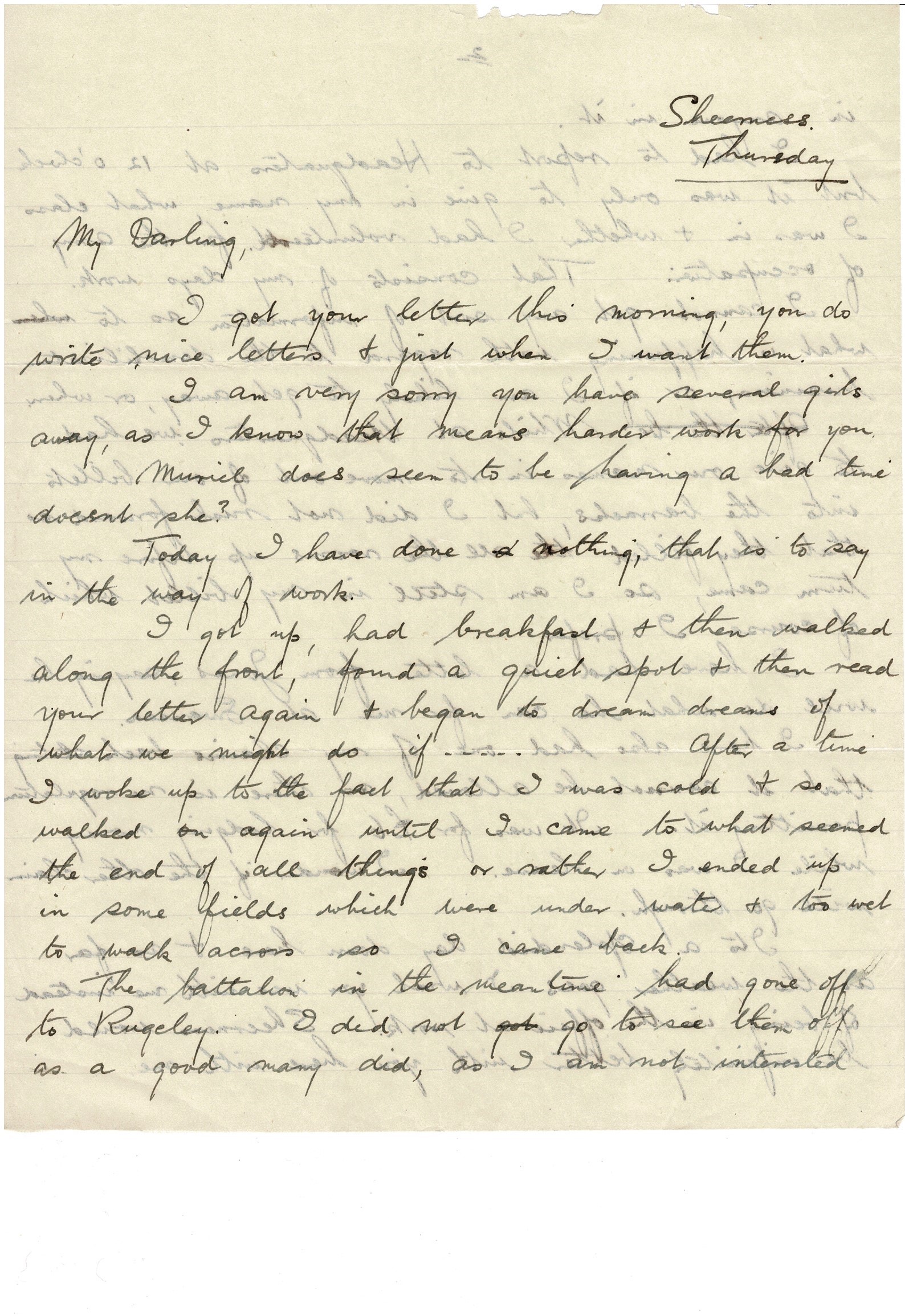 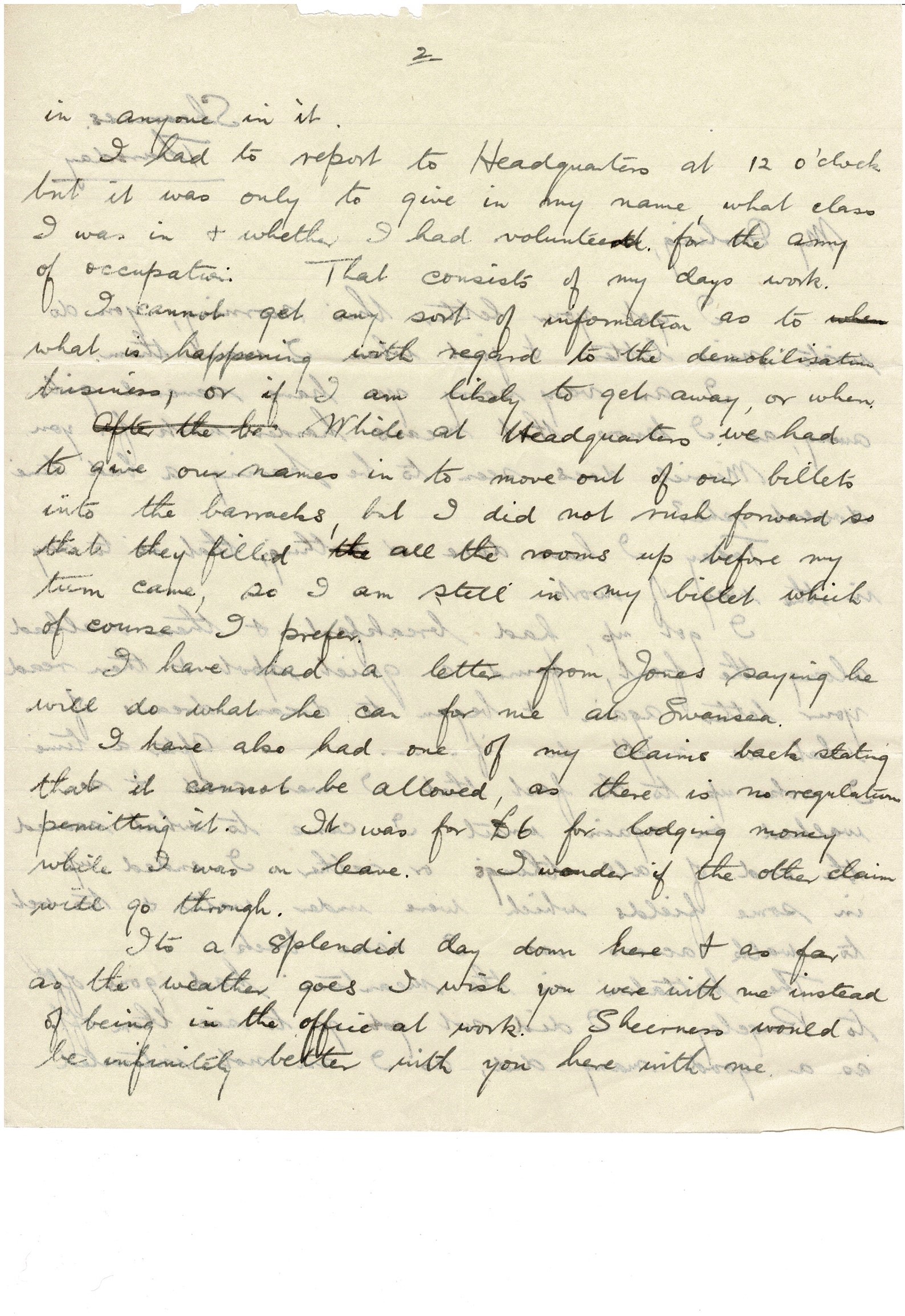 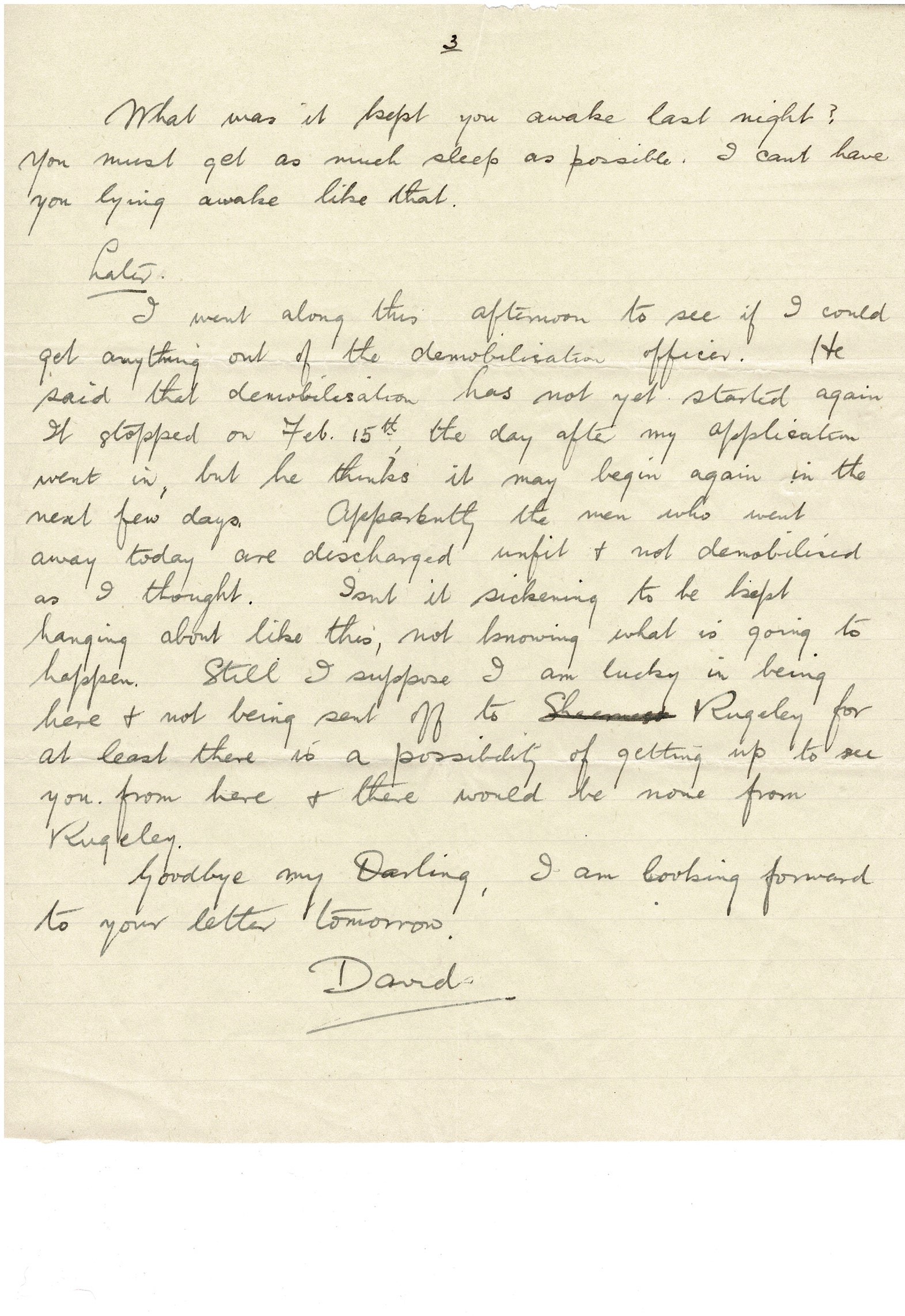 I got your letter this morning, you do write nice letters & just when I want them.

I am very sorry you have several girls away, as I know that means harder work for you.

Muriel does seem to be having a bad time doesn’t she?

Today I have done nothing, that is to say in the way of work.

I got up, had breakfast & then walked along the front, found a quiet spot & then read your letter again & began to dream dreams of what we might do if…. After a time I woke up to the fact that I was cold & so walked on again until I came to what seemed the end of all things or rather I ended up in some fields which were under water & too wet to walk across so I came back.

The battalion in the meantime had gone off to Rugeley. I did not go to see them off as a good many did, as I am not interested in anyone in it.

I had to report to Headquarters at 12 o’clock but it was only to give in my name, what class I was in & whether I had volunteered for the Army of occupation. That consists of my days work.

I cannot get any sort of information as to what is happening with regard to the demobilisation business, or if I am likely to get away, or when.

While at Headquarters we had to give our names in to move out of our billets into the barracks, but I did not rush forward so that they filled all the rooms up before my turn came, so I am still in my billet which of course I prefer.

I have had a letter from Jones saying he will do what he can for me at Swansea.

I have also had one of my claims back stating that it cannot be allowed, as there is no regulation permitting it. It was for £6 for lodging money while I was on leave. I wonder if the other claim will go through.

Its a splendid day down here & as far as the weather goes I wish you were with me instead of being in the office at work. Sheerness would be infinitely better with you here with me.

What was it kept you awake last night? You must get as much sleep as possible. I can’t have you lying awake like that.

I went along this afternoon to see if I could get anything out of the demobilisation officer. He said that demobilisation has not yet started again. It stopped on Feb 15th, the day after my application went in, but he thinks it may begin again in the next few days. Apparently the men who went away today are discharged unfit & not demobilised as I thought. Isn’t it sickening to be kept hanging about like this, not knowing what is going to happen. Still I suppose I am lucky in being here & not being sent off to Rugeley for at least there is a possibility of getting up to see you from here & there would be none from Rugeley.

Goodbye my Darling, I am looking forward to your letter tomorrow.