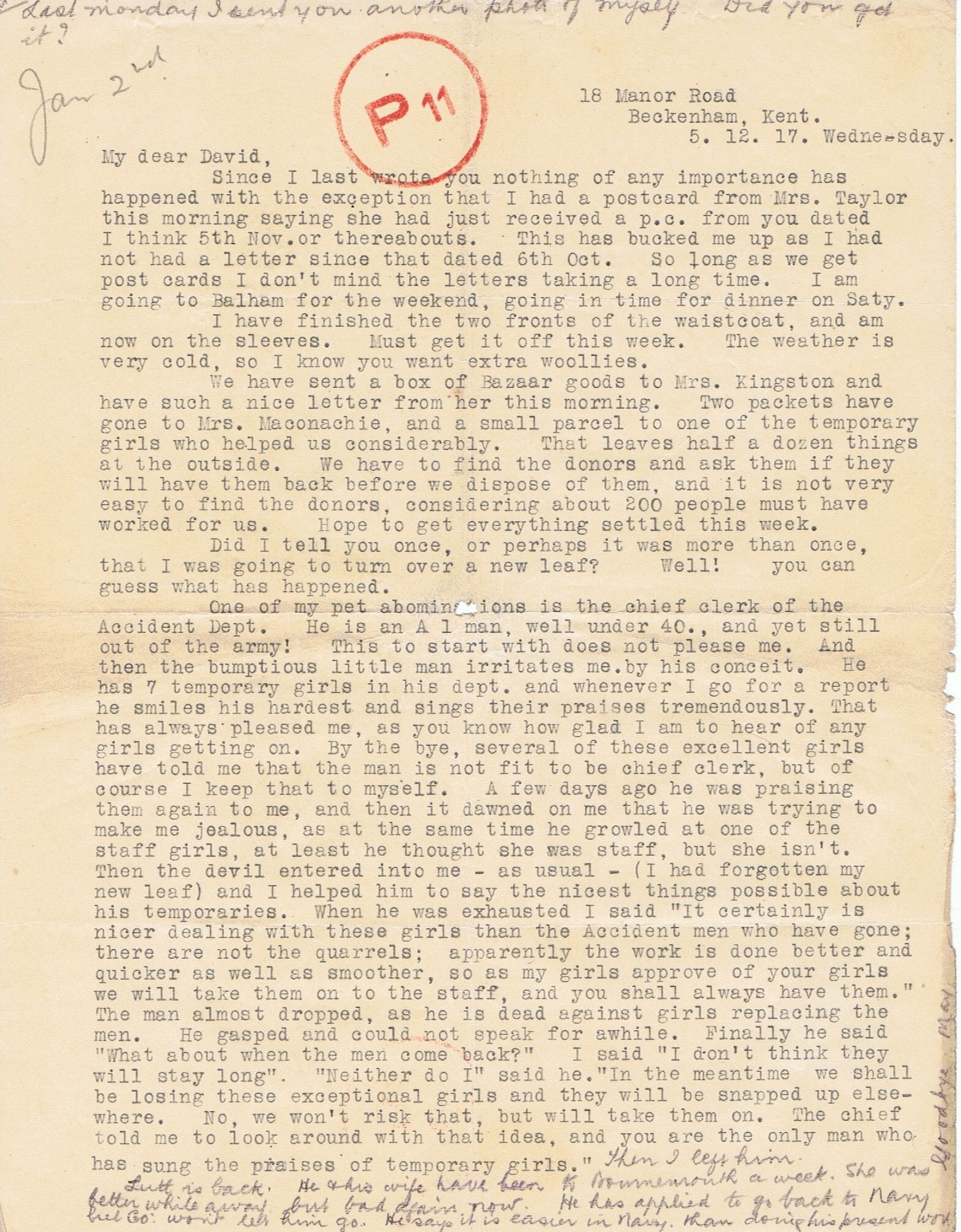 May to David Beckenham 5.12.17 Wednesday
My dear David,
Since I last wrote to you nothing of any importance has happened with the exception that I had a postcard from Mrs Taylor this morning saying she had just received a p.c. from you dated I think 5th Nov or thereabouts. This has bucked me up as I had not had a letter since that dated 6th Oct. So long as we get post cards I don’t mind the letters taking a long time. I am going to Balham for the weekend, going in time for dinner on Saturday.
I have finished the two fronts of the waistcoat, and am now on the sleeves. Must get it off this week. The weather is very cold, so I know you want extra woollies.
We have sent a box of Bazaar goods to Mrs Kingston and have such a nice letter from her this morning. Two packets have gone to Mrs Maconachie, and a small parcel to one of the temporary girls who helped us considerably. That leaves half a dozen things at the outside. We have to find the donors and ask them if they will have them back before we dispose of them, and it is not very easy to find the donors, considering about 200 people must have worked for us. Hope to get everything settled this week.
Did I tell you once, or perhaps it was more than once, that I was going to turn over a new leaf? Well! You can guess what has happened.
One of my pet abominations is the chief clerk of the Accident Dept. He is an A 1 man, well under 40, and yet still out of the army! This to start with does not please me. And then the bumptious little man irritates me, by his conceit. He has 7 temporary girls in his dept. And whenever I go for a report he smiles his hardest and sings their praises tremendously. That has always pleased me, as you know how glad I am to hear of any girls getting on. By the bye, several of these excellent girls have told me that the man is not fit to be a chief clerk, but of course I keep that to myself. A few days ago he was praising them again to me, and then it dawned on me that he was trying to make me jealous, as at the same time he growled at one of the staff girls, at least he thought she was staff, but she isn’t. Then the devil entered into me – as usual – (I had forgotten my new leaf) and I helped him to say the nicest things possible about his temporaries. When he was exhausted I said “It certainly is nicer dealing with these girls than the Accident men who have gone; there are not the quarrels; apparently the work is done better and quicker as well as smoother, so as my girls approve of your girls we will take them on to the staff, and you shall always have them.” The man almost dropped, as he is dead against girls replacing the men. He gasped and could not speak for awhile. Finally he said “What about when the men come back?” I said “I don’t think they will stay long”. “Neither do I” said he. “In the meantime we shall be losing these exceptional girls and they will be snapped up elsewhere. No, we won’t risk that, but I will take them on. The chief told me to look around with that idea, and you are the only man who has sung the praises of temporary girls.” Then I left him.
Lutt is back. He and his wife have been to Bournemouth a week. She was better while away but bad again now. He has applied to go back to Navy but GO won’t let him go. He says it is easier in Navy than doing his present work.
Goodbye
May
P.S. Last Monday I sent you another photo of myself. Did you get it?