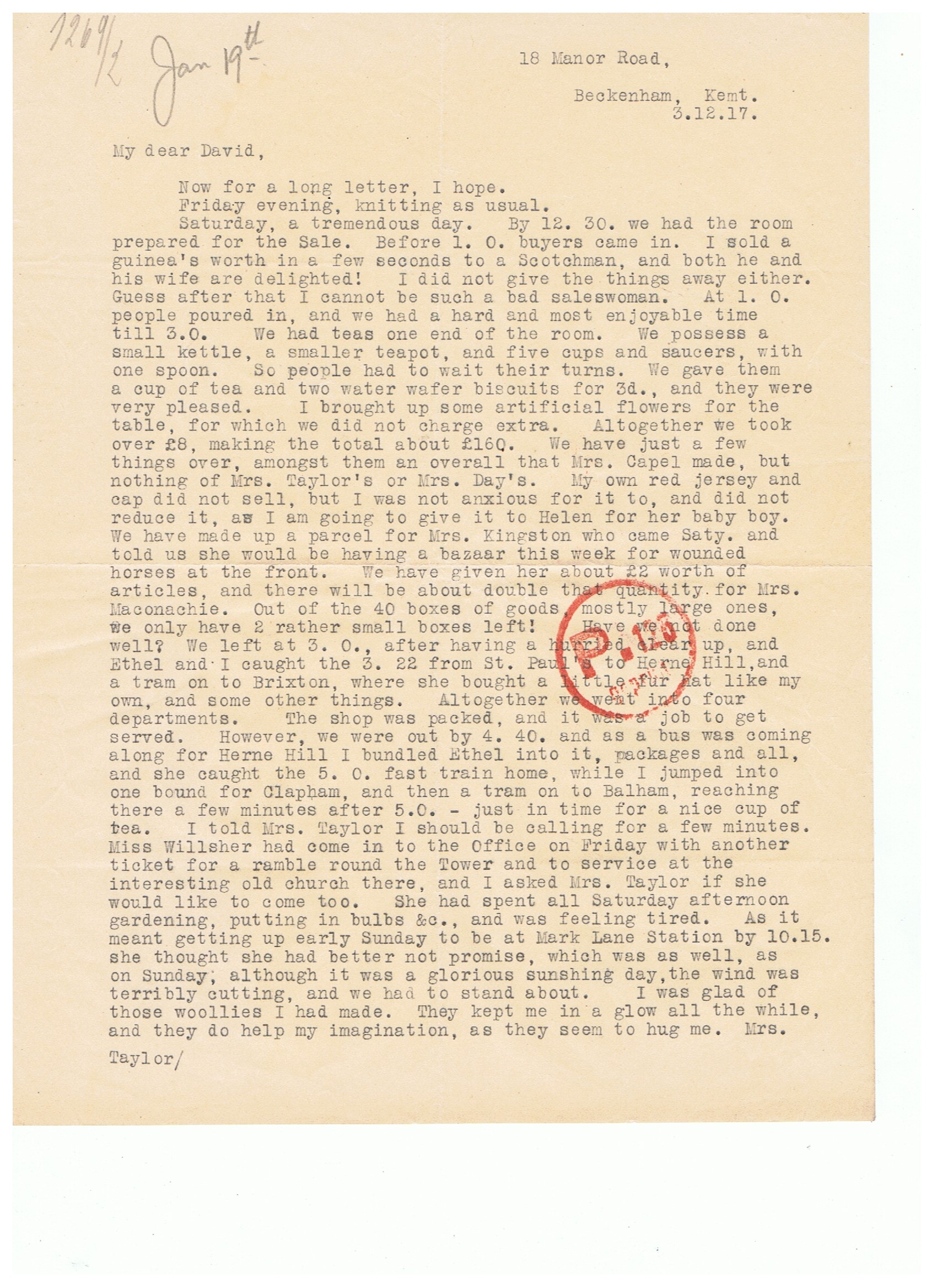 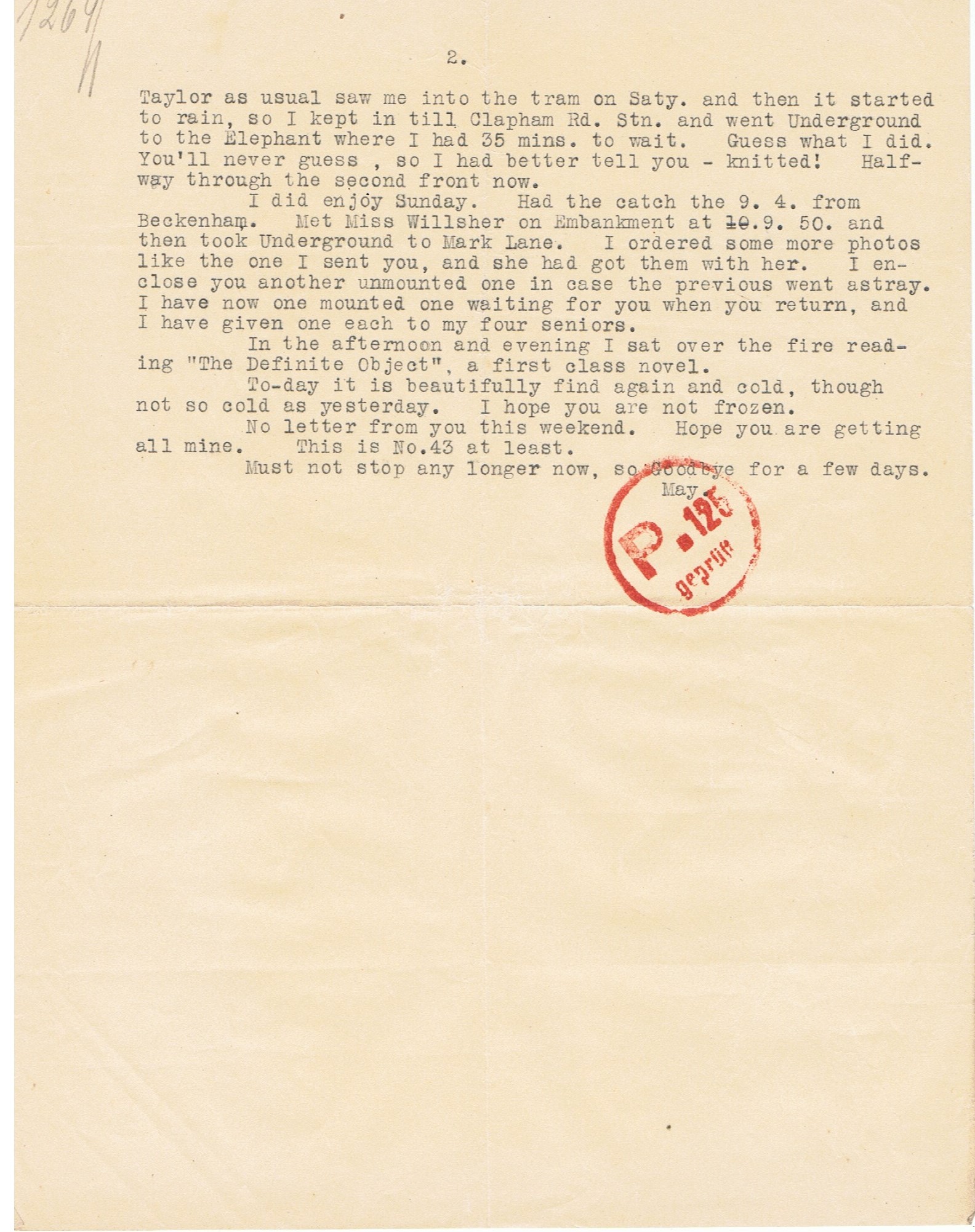 May to David Beckenham 3.12.17
My dear David,
Now for a long letter, I hope. Friday evening, knitting as usual.
Saturday, a tremendous day. By 12.30 we had the room prepared for the Sale. Before 1.0 buyers came in. I sold a guinea’s worth in a few seconds to a Scotchman, and both he and his wife were delighted! I did not the things away either. Guess after that I cannot be such a bad saleswoman. At 1.0 people poured in, and we had a hard and most enjoyable time til 3.0. We had teas at one end of the room. We possess a small kettle, a smaller teapot, and five cups and saucers, with one spoon. So people had to wait their turns. We gave them a cup of tea and two wafer biscuits for 3d., and they were very pleased. I brought up some artificial flowers for the table, for which we did not charge extra. Altogether we took over £8, making the total about £160. We have just a few things over, amongst them an overall that Mrs Capel made, but nothing of Mrs Taylor’s or Mrs Day’s. My own red jersey and cap did not sell, but I was not anxious for it to, and did not reduce it, as I am going to give it to Helen for her baby boy. We have made up a parcel for Mrs Kingston who came Saturday and told us she would be having a bazaar this week for wounded horses at the front. We have given her about £2 worth of articles, and there will be about double that quantity for Mrs Maconachie. Out of the 40 boxes of goods, mostly large ones, we only have 2 rather small boxes left! Have we not done well? We left at 3.0 after having a hurried clear up, and Ethel and I caught the 3.22 from St Paul’s to Herne Hill, and a tram on to Brixton, where she bought a little fur hat like my own, and some other things. Altogether we went into four departments. The shop was packed, and it was a job to get served. However, we were out by 4.40 and as a bus was coming along for Herne Hill I bundled Ethel into it, packages and all, and she caught the 5.0 fast train home, while I jumped into one bound for Clapham, and then a tram on to Balham, reaching there a few minutes after 5.0 – just in time for a nice cup of tea. I told Mrs Taylor I should be calling for a few minutes. Miss Willsher had come in to the Office on Friday with another ticket for a ramble round the Tower and to service at the interesting old church there, and I asked Mrs Taylor if she would like to come too. She had spent all Saturday afternoon gardening, putting in bulbs etc, and was feeling tired. As it meant getting up early Sunday to be at Mark Lane Station by 10.15 she thought she had better not promise, which was as well, as on Sunday, although it was a glorious sun shining day, the wind was terribly cutting, and we had to stand about. I was glad of those woollies I had made. They kept me in a glow all the while, and they do help my imagination, as they seem to hug me. Mrs Taylor as usual saw me into the tram on Saturday and then it started to rain, so I kept in till Clapham Rd Stn and went Underground to the Elephant where I had 35 mins to wait. Guess what I did. You’ll never guess, so I had better tell you – knitted! Half way through the second front now.
I did enjoy Sunday. Had to catch the 9.4 from Beckenham. Met Mill Willsher on Embankment at 9.50 and then took Underground to Mark Lane. I ordered some photos like the one I sent you, and she had got them with her. I enclose you another unmounted one in case the previous went astray. I have now one mounted waiting for you when you return, and I have given one each to my four seniors.
In the afternoon and evening I sat over the fire reading “The Definite Object”, a first class novel.
Today it is beautifully fine again and cold, though not as cold s yesterday. I hope you are not frozen. No letter from you this weekend. Hope you are getting all mine. This is No. 43 at least. Must not stop any longer now, so Goodbye for a few days.
May