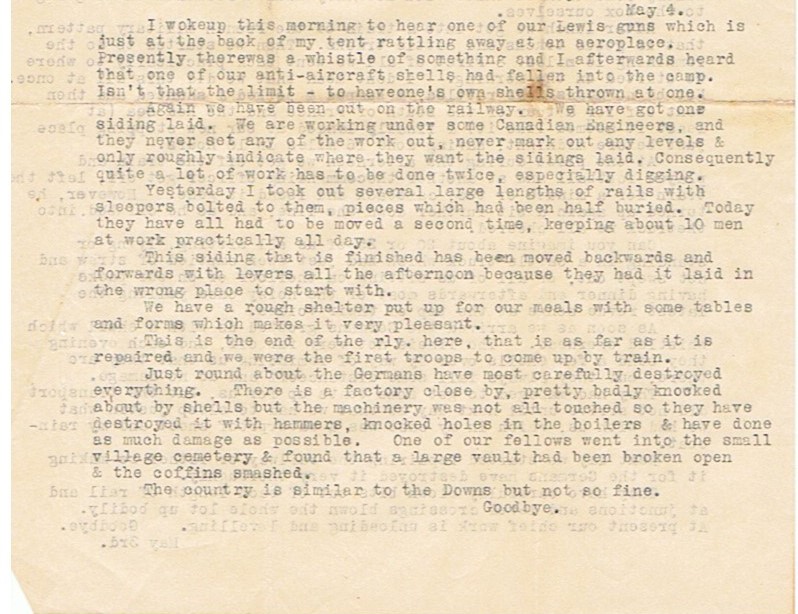 I woke up this morning to hear one of our Lewis guns which is just at the back of my tent rattling away at an aeroplace. Presently there was a whistle of something and I afterwards heard that one of our anti-aircraft shells had fallen into the camp. Isn’t that the limit, to have one’s own shells thrown at one.

Again we have been out on the railway. We have got one siding laid. We are working under some Canadian Engineers, and they never set any of the work out, never mark out any levels & only roughly indicate where they want the sidings laid. Consequently quite a lot of work has to be done twice, especially digging.

Yesterday I took out several large lengths of rails with sleepers, bolted to them, pieces which had been half buried. Today they have all had to be moved a second time, keeping about 10 men at work practically all day.

This siding that is finished has been moved backwards and forwards with levers all the afternoon because they had it laid in the wrong place to start with.

We have a rough shelter put up for our meals with some tables and forms which makes it very pleasant.

This is the end of the rly. here, that is as far as it is repaired and we were the first troops to come up by train.

Just round about the Germans have most carefully destroyed everything. There is a factory close by, pretty badly knocked about by shells but the machinery was not all touched so they have destroyed it with hammers, knocked holes in the boilers & have done as much damage as possible. One of our fellows went into the small village cemetery & found that a large vault had been broken open & the coffins smashed.

The country is similar to the Downs but not so fine. Goodbye.