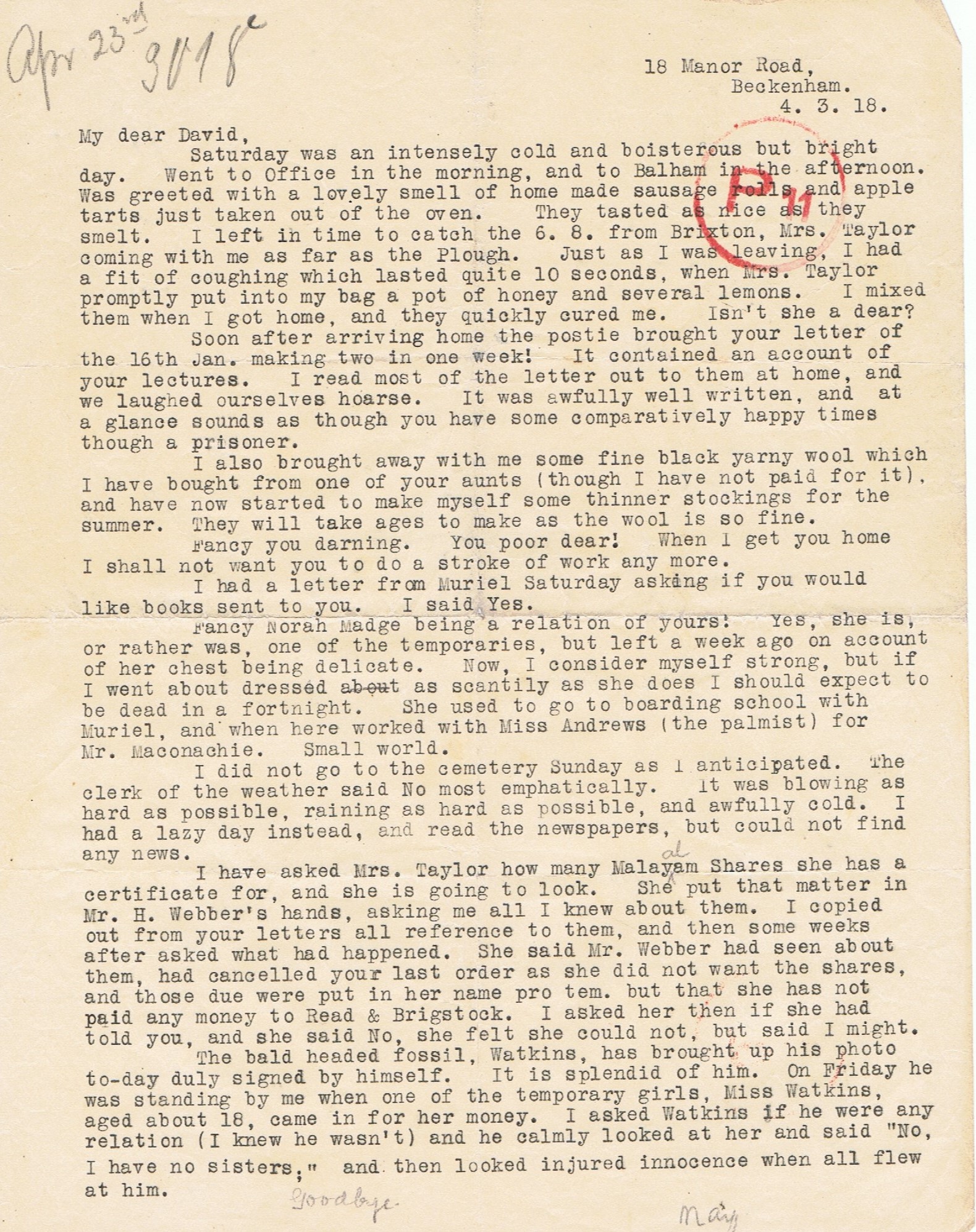 May to David Beckenham. 4. 3. 18.
My dear David,
Saturday was an intensely cold and boisterous but bright day. Went to Office in the morning, and to Balham in the afternoon. Was greeted with a lovely smell of home made sausages and apple tarts just taken out of the oven. They tasted as nice as they smelt. I left in time to catch the 6. 8. from Brixton, Mrs. Taylor coming with me as far as the Plough. Just as I was leaving I had a fit of coughing which lasted quite 10 seconds, when Mrs Taylor promptly put into my bag a pot of honey and several lemons. I mixed them when I got home, and they quickly cured me. Isn’t she a dear?
Soon after arriving home the postie brought your letter of the 16th Jan. making two in one week! It contained an account of your lectures. I read most of the letter out to them at home, and we laughed ourselves hoarse. It was awfully well written, and at a glance sounds as though you have some comparatively happy times though a prisoner.
I also brought away with me some fine black yarny wool which I have bought from one of your aunts (though I have not paid for it), and have now started to make myself some thinner stockings for the summer. They will take ages to make as the wool is so fine.
Fancy you darning. You poor dear! When I get you home I shall not want you to do a stroke of work any more.
I had a letter from Muriel Saturday asking if you would like books sent to you. I said Yes.
Fancy Norah Madge being a relation of yours! Yes, she is, or rather was, one of the temporaries, but left a week ago on account of her chest being delicate. Now, I consider myself strong, but if I went about dressed abet as scantily as she does I should expect to be dead in a fortnight. She used to go to boarding school with Muriel, and when here worked with Miss Andrews (the palmist) for Mr. Maconachie. Small world.
I did not go to the cemetery Sunday as I anticipated. The clerk of the weather said No most emphatically. It was blowing as hard as possible, raining as hard as possible, and awfully cold. I had a lazy day instead, and read the newspapers, but could not find any news.
I have asked Mrs. Taylor how many Malayalam Shares she has a certificate for, and she is going to look. She put that matter in Mr. H. Webber’s hands, asking me all I knew about them. I copied out from your letters all reference to them, and then some weeks after asked what had happened. She said Mr. Webber had seen about them, had cancelled your last order as she did not want the shares, and those due were put in her name pro tem, but that she has not paid any money to Read & Brigstock. I asked her then if she had told you, and she said No, she felt she could not, but said I might.
The bald headed fossil, Watkins, has brought up his photo to-day duly signed by himself. It is splendid of him. On Friday he was standing by me when one of the temporary girls, Miss Watkins, aged about 18, came in for her money. I asked Watkins if he were any relation (I knew he wasn’t) and he calmly looked at her and said “No, I have no sisters.” And then looked injured innocence when all flew at him.
Goodbye
May