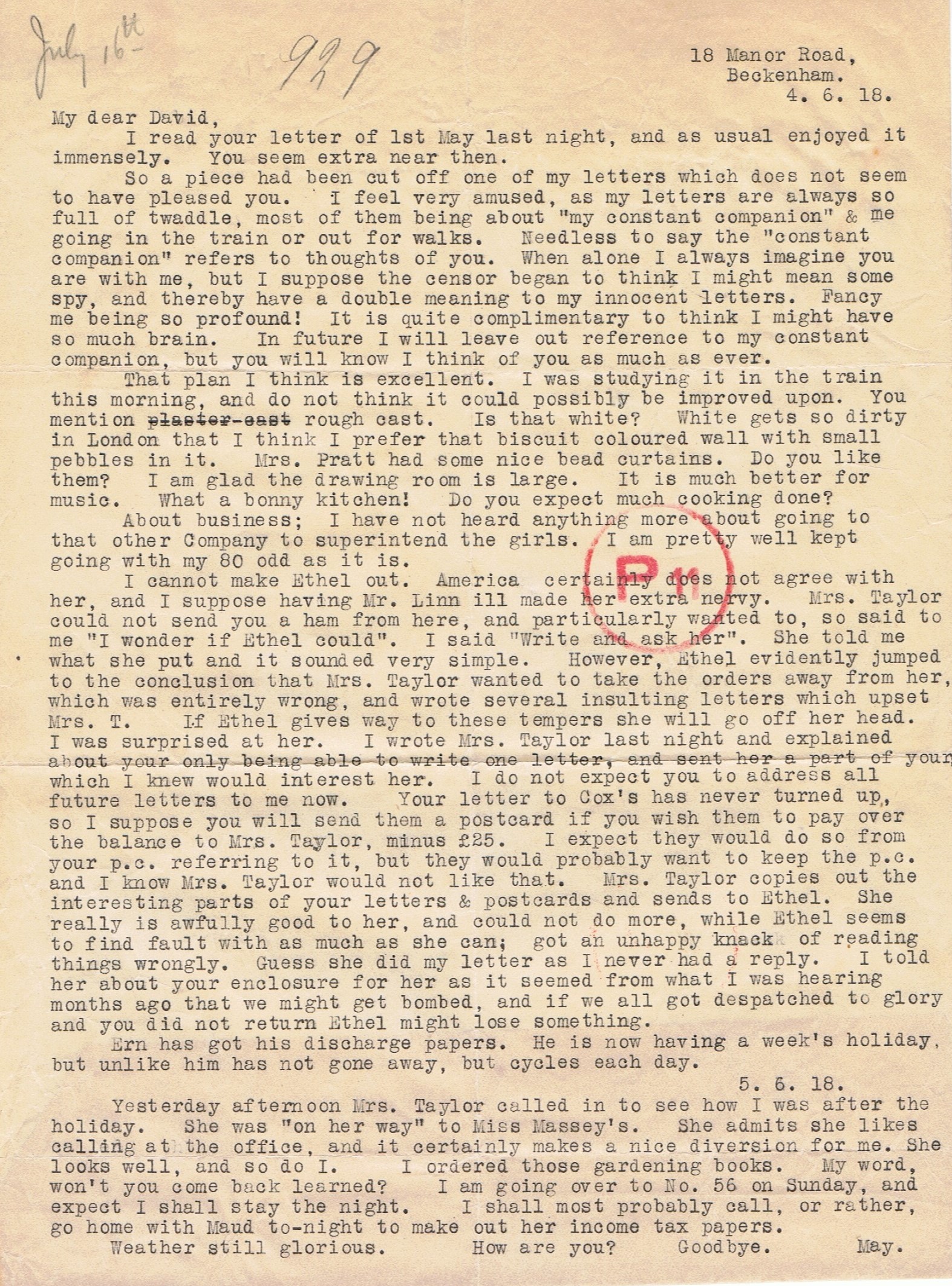 May to David Beckenham 4.6.18
My dear David,
I read your letter of 1st May last night, and as usual enjoyed it immensely. You seem extra near then.
So a piece had been cut off one of my letters which does not seem to have pleased you. I feel very amused, as my letters are always so full of twaddle, most of them being about “my constant companion” & me going in the train or out for walks. Needless to say the “constant companion” refers to thoughts of you. When alone I always image you are with me, but I suppose the censor began to think I mean some spy, and thereby have a double meaning to my innocent letters. Fancy me being so profound! It is quite complementary to think I might have so much brain. In future I will leave out reference to my constant companion, but you will know I think of you as much as ever.
That plan I think is excellent. I was studying it in the train this morning, and do not think it could possibly be improved upon. You mention rough cast. Is that white? White gets so dirty in London that I think I prefer that biscuit coloured wall with small pebbles in it. Mrs Pratt had some nice bead curtains. Do you like them? I am glad the drawing room is large. It is much better for music. What a bonny kitchen! Do you expect much cooking done?
About business; I have not heard anything more about going to that other Company to superintend the girls. I am pretty well kept going with my 80 odd as it is.
I cannot make Ethel out. America certainly does not agree with her, and I suppose having Mr Linn ill made her extra nervy. Mrs Taylor could not send you a ham from here, and particularly wanted to, so said to me “I wonder if Ethel could”. I said “Write and ask her”. She told me what she put and it sounded very simple. However, Ethel evidently jumped to the conclusion that Mrs Taylor wanted to take orders away from her, which was entirely wrong, and wrote several insulting letters which upset Mrs T. If Ethel gives way to these tempers she will go off her head. I was surprised at her. I write Mrs Taylor last night and explained about your only being able to write one letter, and sent her a part of yours which I knew would interest her. I do not expect you to address all future letters to me now. Your letter to Cox’s has never turned up, so I suppose you will send them a postcard if you wish them to pay over the balance to Mrs Taylor, minus £25. I expect they would do so from your p.c. referring to it, but they would probably want to keep the p.c. and I know Mrs Taylor would not like that. Mrs Taylor copies out the interesting parts of your letters & postcards and sends to Ethel. She really is awfully good to her, and could not do more, while Ethel seems to find fault with as much as she can; got an unhappy knack of reading things wrongly. Guess she did my letter as I never had a reply. I told her about your enclosure for her as it seemed from what I was hearing months ago that we might get bombed, and if we all get despatched to glory and you did not return Ethel might lose something.
Ern has got his discharge papers. He is now having a week’s holiday, but unlike him has not gone away, but cycles each day.
5.6.18
Yesterday afternoon Mrs Taylor called in to see how I was after the holiday. She was “on her way” to Miss Massey’s. She admits she likes calling at the office, and it certainly makes a nice diversion for me. She looks well, and so do I. I ordered those gardening books. My word, won’t you come back learned? I am going over to No 56 on Sunday, and expect I shall stay the night. I shall most probably call, or rather, go home with Maud tonight to make out her income tax papers.
Weather still glorious. How are you? Goodbye. May