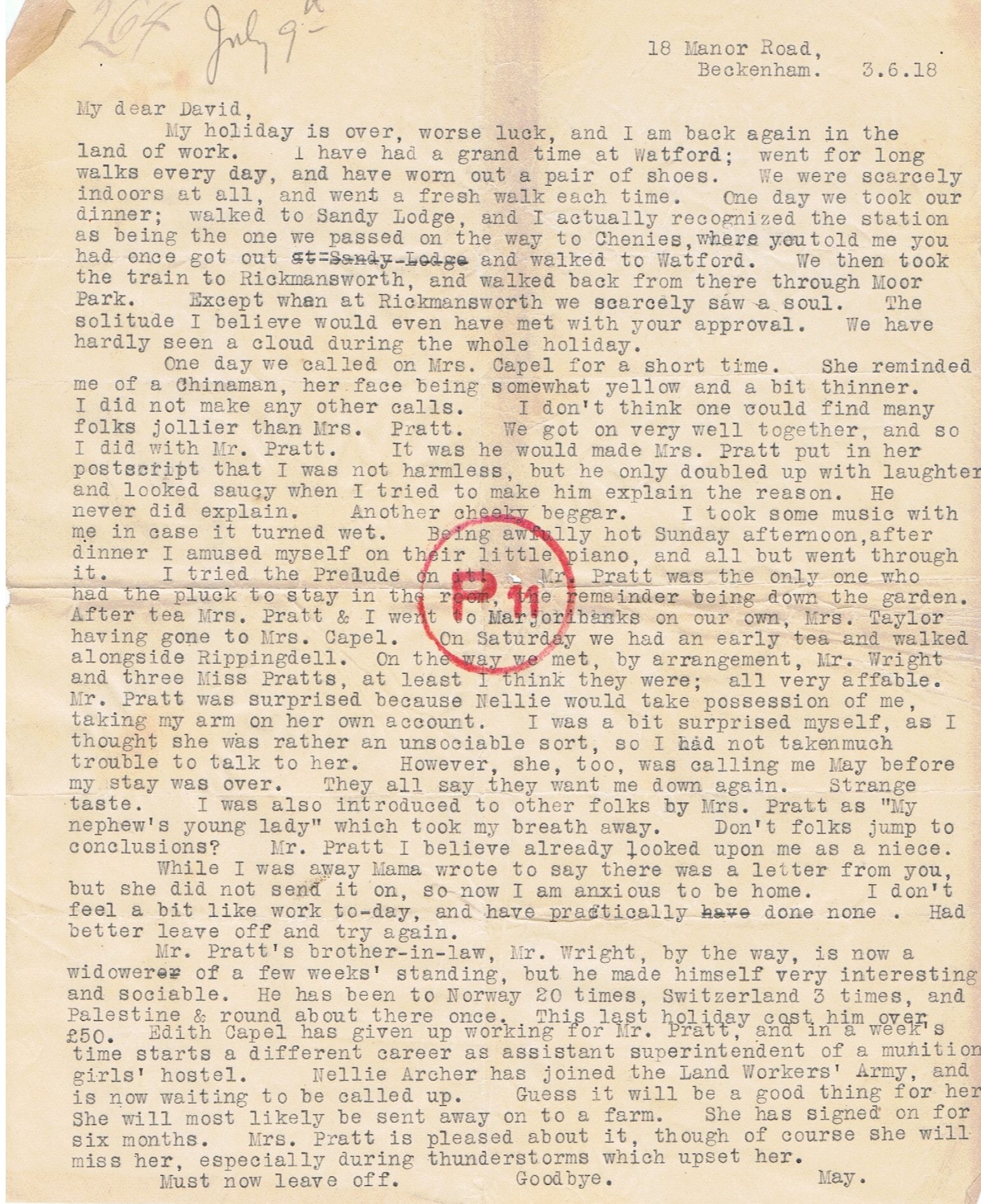 May to David Beckenham 3.6.18
My holiday is over, worse luck, and I am back again in the land of work. I have had a grand time at Watford; went for long walks every day, and have worn out a pair of shoes. We were scarcely indoors at all, and went a fresh walk each time. One day we took our dinner; walked to Sandy Lodge, and I actually recognised the station as being the one we passed on the way to Chenies, where you told me you had once got out and walked to Watford. We then took the train to Rickmansworth, and walked back from there through Moor Park. Except when at Rickmansworth we scarcely saw a soul. The solitude I believe would even have met with your approval. We have hardly seen a cloud during the whole holiday.
One day we called on Mrs Capel for a short time. She reminded me of a Chinaman, her face being somewhat yellow and a bit thinner. I did not make any other calls. I don’t think one could find many folks jollier than Mrs Pratt. We got only very well together, and so I did with Mr Pratt. It was he would made Mrs Pratt put in her postscript that I was not harmless, but he only doubled up with laughter and looked saucy when I tried to make him explain the reason. He never did explain. Another cheeky beggar. I took some music with me in case it turned wet. Being awfully hot Sunday afternoon, after dinner I amused myself on their little piano, and all but went through it. I tried the Prelude on it! Mr Pratt was the only one who had the pluck to stay in the room, the remainder being down the garden. After tea Mrs Pratt & I went to Marjoribanks on our own, Mrs Taylor having gone to Mrs Capel. On Saturday we had an early tea and walked alongside Rippingdell. On the way we met, by arrangement, Mr Wright and three Miss Pratts, at least I think they were; all very affable. Mr Pratt was surprised because Nellie would take possession of me, taking my arm on her own account. I was a bit surprised myself, as I thought she was rather an unsociable sort, so I had not taken much trouble to talk to her. However, she, too, was calling me May before my stay was over. They all say they want me down again. Strange taste. I was also introduced to other folks by Mrs Pratt as “My nephew’s young lady” which took my breath away. Don’t folks jump to conclusions? Mr Pratt I believe already looked upon me as a niece.
While I was away Mama wrote to say there was a letter from you, but she did not send it on, so now I am anxious to be home. I don’t feel a bit like work today, and have practically done none. Had better leave off and try again.
Mr Pratt’s brother-in-law, Mr Wright, by the way, is now a widower of a few weeks standing, but he made himself very interesting and sociable. He has been to Norway 20 times, Switzerland 3 times, and Palestine & round about there once. This last holiday cost him over £50. Edith Capel has given up working for Mr Pratt, and in a week’s time starts a different career as assistant superintendant of a munition girls’ hostel. Nellie Archer has joined the Land Workers’ Army, and is waiting to be called up. Guess it will be a good thing for her. She will most likely be sent away on to a farm. She has signed on for six months. Mrs Pratt is pleased about it, though of course she will miss her, especially during thunderstorms which upset her.
Must leave off now.
Goodbye.
May