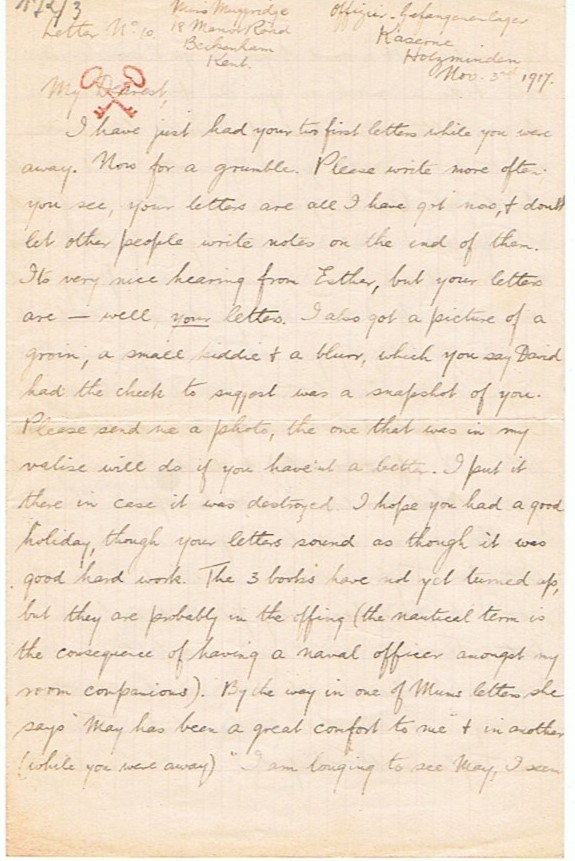 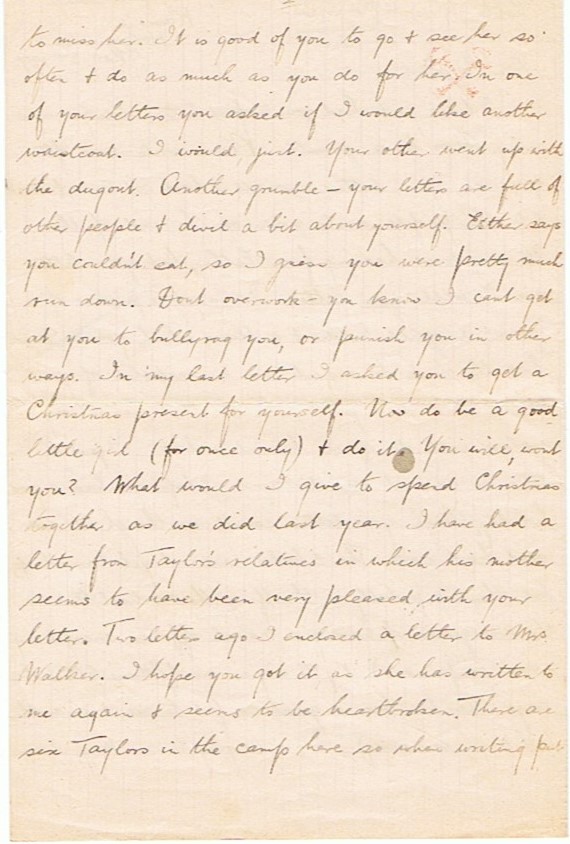 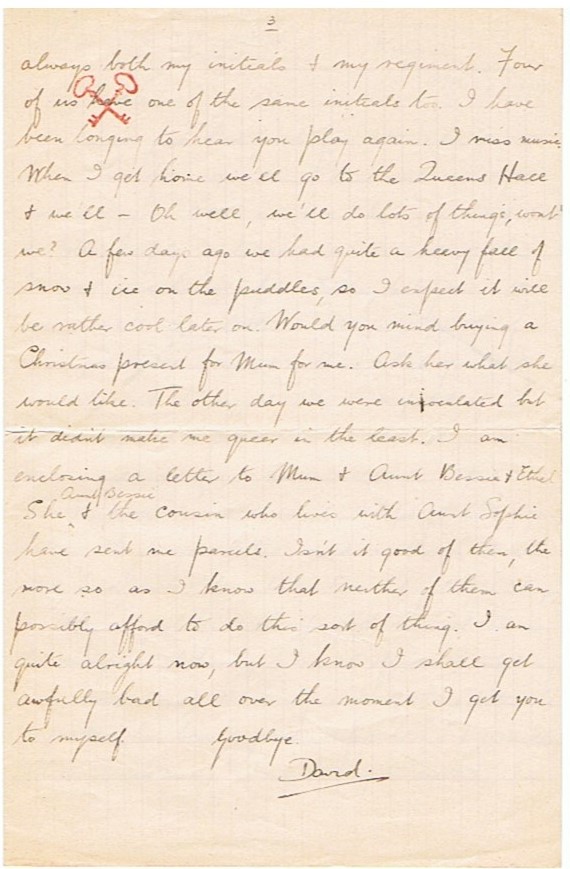 I have just had your two first letters while you were away.

Now for a grumble. Please write more often, you see your letters are all I have got now, and don’t let other people write notes on the end of them.               Its very nice hearing from Esther, but your letters are – well, your letters. I also got a picture of a groin, a small kiddie and a blurr, which you say David had the cheek to suggest was a snapshot of you. Please send me a photo, the one that was in my valise will do if you haven’t a better one. I put it there in case it was destroyed. I hope you had a good holiday, though your letters sound as though it was good hard work.

The 3 books have not yet turned up, but they are probably in the offing (the nautical term is the consequence of having a naval officer amongst my room companions).

By the way in one of Mum’s letters she says “May has been a great comfort to me” and in another (while you were away) “I am longing to see May, I seem to miss her.” It is good of you to go and see her so often and do as much as you do for her. In one of your letters you asked if I would like another waistcoat. I would just. Your other went up with the dugout.

Another grumble – your letters are full of other people and devil a bit about yourself. Esther says you couldn’t eat, so I guess you were pretty much run down. Don’t overwork – you know I can’t get at you to bullying you, or punish you in other ways. In my last letter I asked you to get a Christmas present for yourself. Now do be a good little girl (for once only) and do it. You will won’t you? What would I   give to spend Christmas together as we did last year.

I have had a letter from Taylor’s relatives in which his mother seems to have been very pleased with your letter. Two letters ago I enclosed a letter to Mrs Walker. I hope you got it as she has written to me again and seems to be heart-broken.

There are six Taylors in the camp here so when writing put always both my initials and my regiment. Four of us have one of the same initials too.

I have been longing to hear you play again. I miss music. When I get home we’ll go to the Queens Hall and we’ll – oh well, we’ll do lots of things, wont we? A few days ago we had quite a heavy fall of snow and ice on the puddles, so I expect it will be rather cool later on. Would you mind buying a Christmas present for Mum for me. Ask her what she would like. The other day we were innoculated but it didn’t make me queer in the least.

I am enclosing a letter to Mum and Aunt Bessie and Ethel. She, Aunt Bessie, and the cousin who lives with Aunt Sophie have sent me parcels. Isn’t it good of them, the more so as I know that neither of them can possibly afford to do this sort of thing. I am quite alright now, but I know I shall get awfully bad all over the moment I get you to myself.