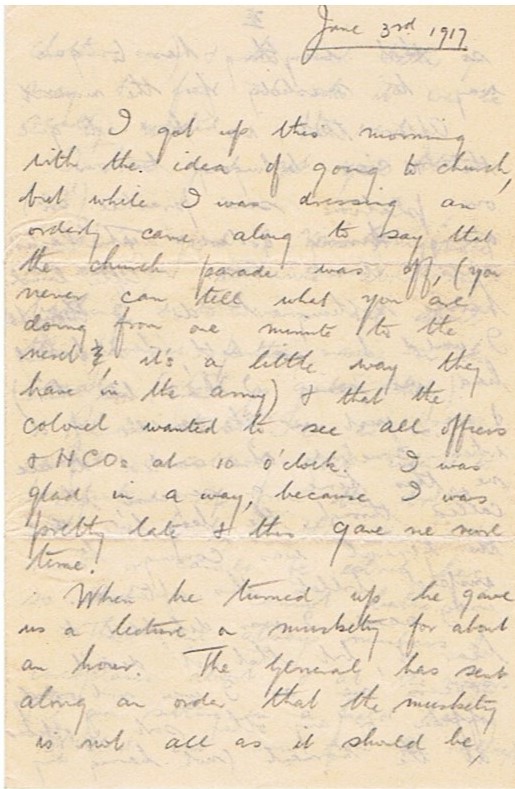 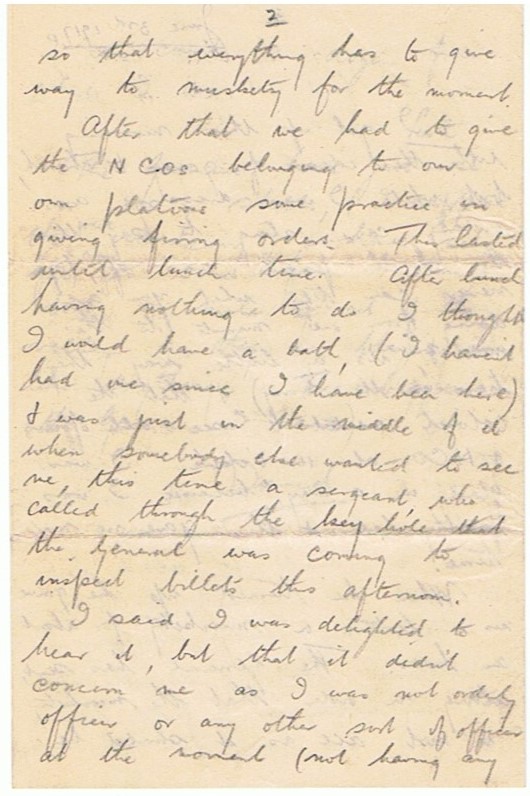 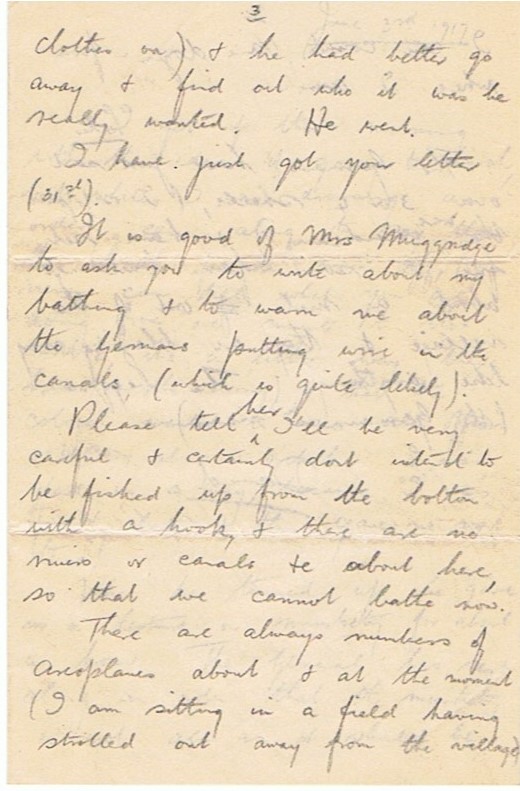 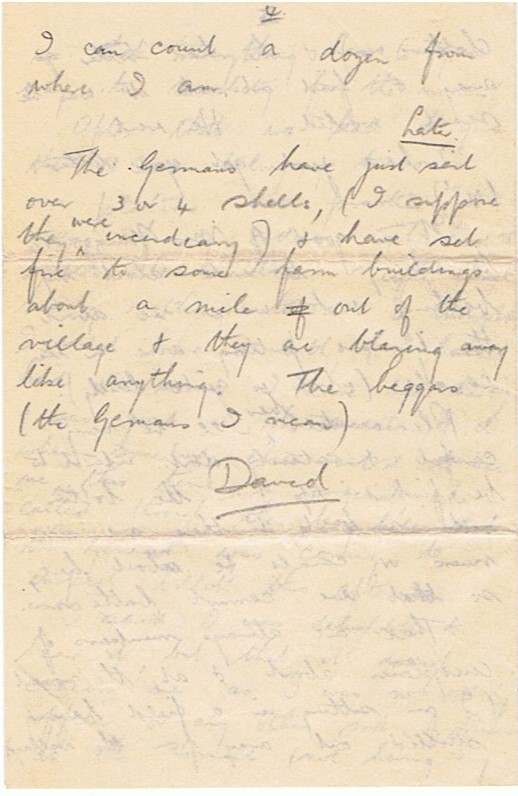 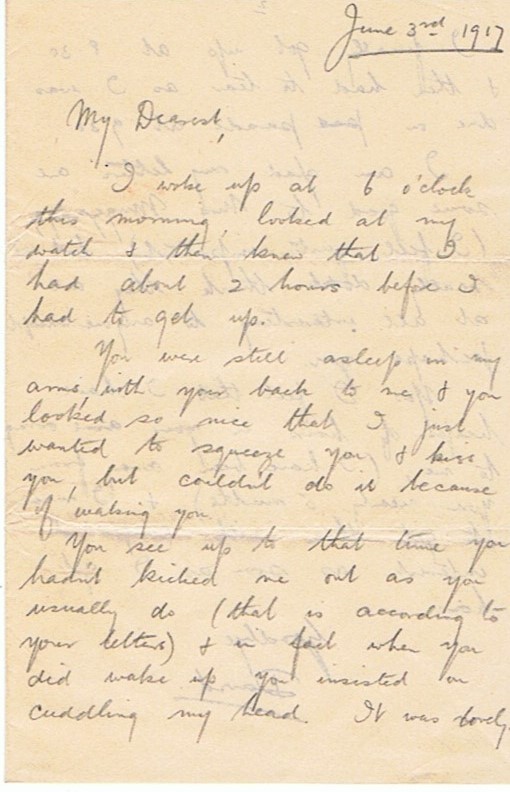 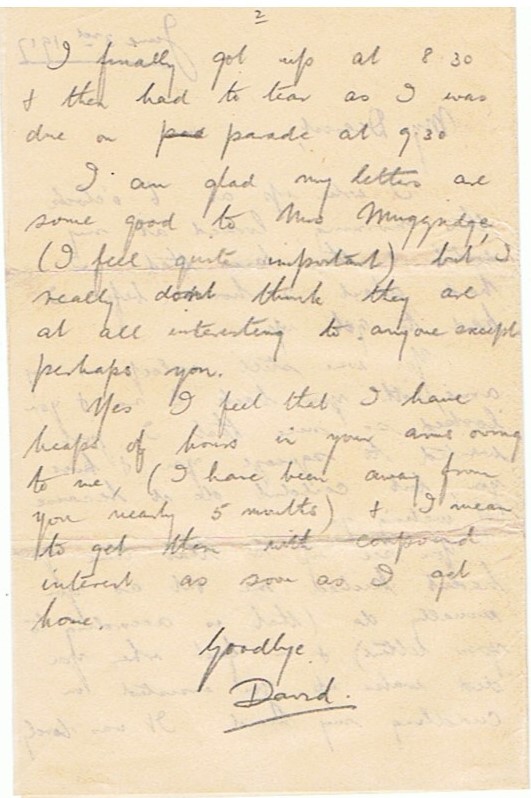 I got up this morning with the idea of going to church, but while I was dressing an orderly came along to say that the church parade was off, (you never can tell what you are doing from one minute to the next, its a little way they have in the army) and that the colonel wanted to see all officers and NCOs at 10 o’clock. I was glad in a way, because I was pretty late and this gave me more time.

When he turned up he gave us a lecture on musketry for about an hour. The General has sent along an order that the musketry is not all as it should be, so that everything has to give way to musketry for the moment.

After that we had to give the NCOs belonging to our own platoons some practice in giving firing orders. This lasted until lunch time. After lunch having nothing to do I thought I would have a bath, (I haven’t had one since I have been here) and was just in the middle of it when somebody else wanted to see men this time a sergeant who called through the key hole that the General was coming to inspect billets this afternoon.

I said I was delighted to hear it, but that it didn’t concern me as I was not orderly officer or any other sort of officer at the moment (not having any clothes on) and he had better go away and find out who it was he really wanted. He went.

It is good of Mrs Muggridge to ask you to write about my bathing and to warn me about the Germans putting wire in the canals (which is quite likely). Please tell her I’ll be very careful and certainly don’t intend to be fished up from the bottom with a hook, and there are no mines or canals etc. about here, so that we cannot bathe now.

There are always numbers of aeroplanes about and at the moment (I am sitting in a field having strolled out away from the village) I can count a dozen from where I am.

The Germans have just sent over 3 or 4 shells (I suppose they were incendiary) and have set fire to some farm buildings about a mile out of the village and they are blazing away like anything. The beggars (the Germans I mean).

I woke up this morning, looked at my watch and then knew that I had about 2 hours before I had to get up.

You were still asleep in my arms, with your back to me and you looked so nice that I just wanted to squeeze you and kiss you, but couldn’t do it because of waking you.

You see up to that time you hadn’t kicked me out as you usually do (that is, according to your letters) and in fact when you did wake up you insisted on cuddling my head. It was lovely.

I am glad my letters are some good to Mrs Muggridge (I feel quite important) but I really don’t think they are all that interesting to anyone except perhaps you.

Yes I feel that I have heaps of hours in your arms owing to me (I have been away from you nearly 5 months) and I mean to get them with compound interest as soon as I get home.