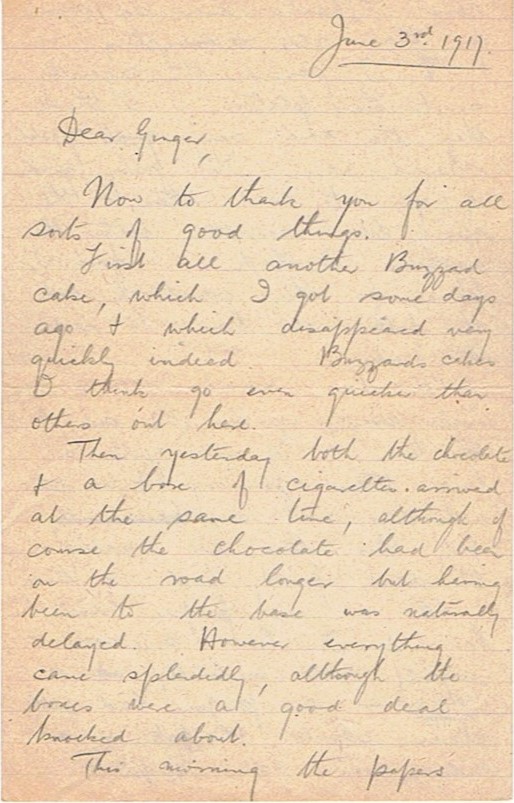 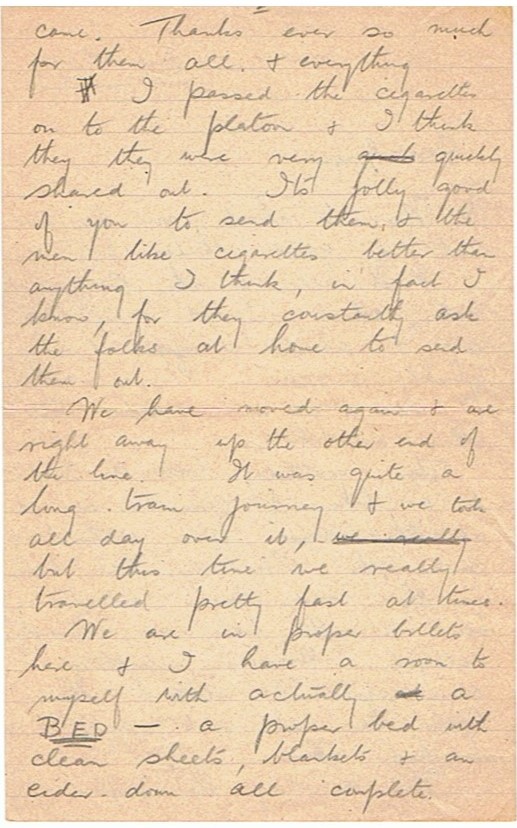 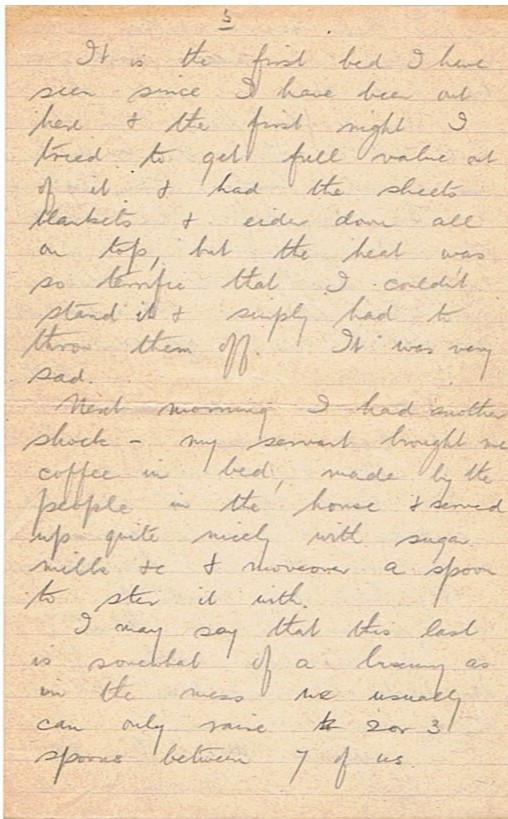 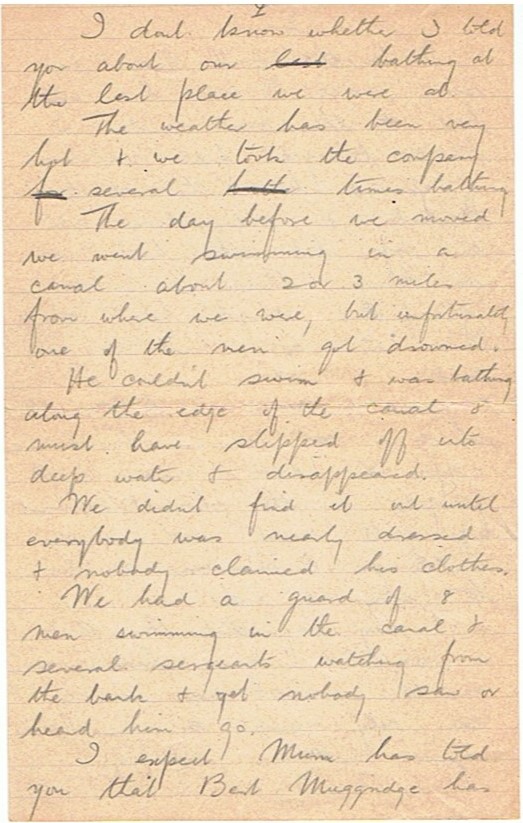 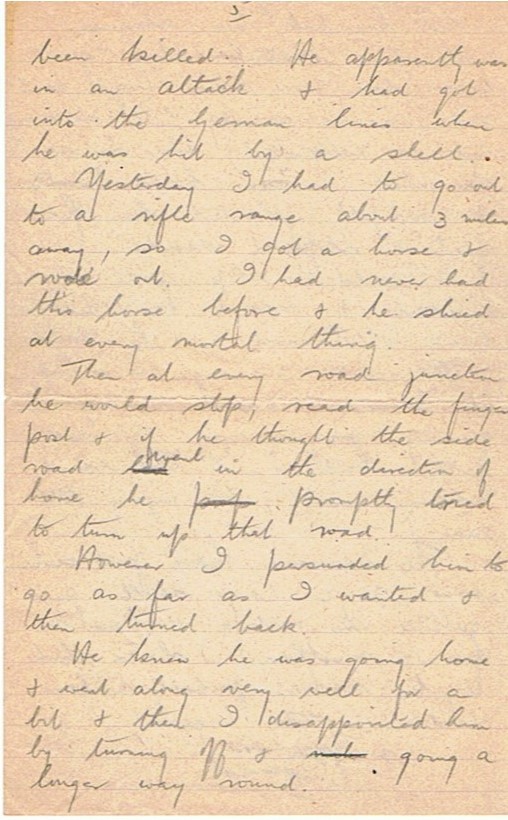 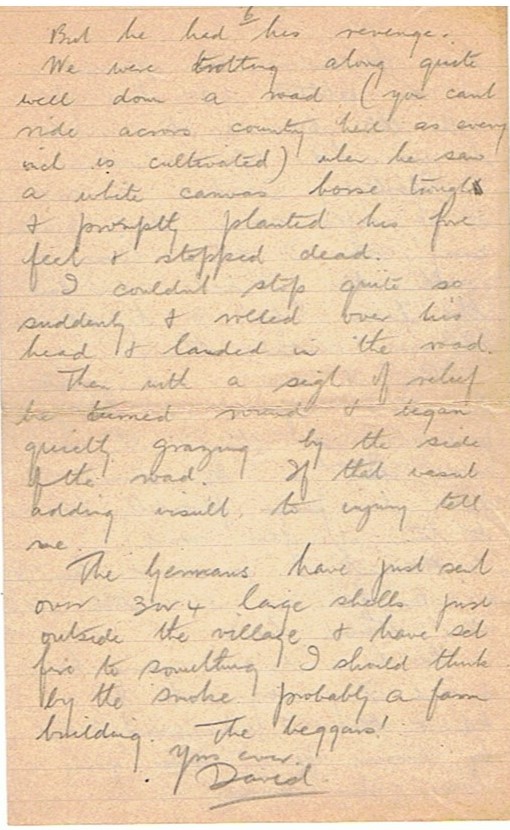 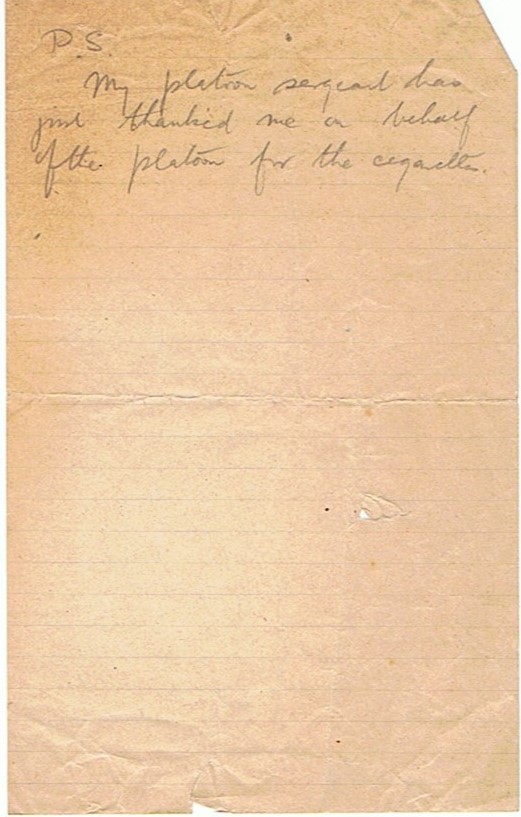 [Ginger is David’s sister, Mrs Ethel Linn, who lives in New Jersey in the USA]

Now to thank you for all sorts of good things.

First of all another Buzzard cake, which I got some days ago and which disappeared very quickly indeed. Buzzard cakes I think go even quicker than others out here.

Then yesterday both the chocolate and a box of cigarettes arrived at the same time, although of course the chocolate had been on the road longer but having been to the base was naturally delayed. However, everything came splendidly, although the boxes were a good deal knocked about.

This morning the papers came. Thanks ever so much for them all and everything.

I passed the cigarettes on to the platoon and I think they were very quickly shared out. Its jolly good of you to send them, and the men like cigarettes better than anything I think, in fact I know, for they constantly ask the folks at home to send them out.

We have moved again and are right away up the other end of the line. It was quite a long train journey and we took all day over it, but this time we really travelled pretty fast at times.

We are in proper billets here and I have a room to myself with actually a BED – a proper bed with clean sheets, blankets and an eiderdown all complete.

It is the first bed I have seen since I have been out here and the first night I tried to get full value out of it and had the sheets, blankets and eiderdown all on top, but the heat was so terrific that I couldn’t stand it and simply had to throw them off. It was very sad.

Next morning I had another shock – my servant brought me coffee in bed, made by the people in the house and served up quite nicely with sugar, milk etc and moreover a spoon to stir it with.

I may say that this last is somewhat of a luxury as in the mess we usually can only raise 2 or 3 spoons between 7 of us.

I don’t know whether I told you about our bathing at the last place we were at.

The weather has been very hot and we took the company several times bathing.

The day before we moved we went swimming in a canal about 2 or 3 miles from where we were, but unfortunately one of the men got drowned.

He couldn’t swim and was bathing along the edge of the canal and must have slipped off into deep water and disappeared.

We didn’t find it out until everybody was nearly dressed and nobody claimed his clothes.

We had a guard of 8 men swimming in the canal and several sergeants watching from the bank and yet nobody saw or heard him go.

I expect Mum has told you that Bert Muggridge has been killed. He apparently was in an attack and had got into the German lines when he was hit by a shell.

Yesterday I had to go out to a rifle range about 3 miles away, so I got a horse and rode out. I had never had this horse before and he shied at every mortal thing.

Then at every road junction he would stop, read the finger post and if he thought the side road went in the direction of home he promptly tried to turn up that road.

However, I persuaded him to go as far as I wanted and then turned back.

He knew he was going home and went along very well for a bit and then I disappointed him by turning off and going a longer way round. But he had his revenge.

We were trotting along quite well down a road (you can’t ride across country here as every inch is cultivated) when he saw a white canvas horse trough and promptly planted his fore feet and stopped dead.

I couldn’t stop quite so suddenly and rolled over his head and landed in the road.

Then with a sigh of relief he turned round and began quietly grazing by the side of the road. If that wasn’t adding insult to injury tell me.

The Germans have just sent over 3 or 4 large shells just outside the village and have set fire to something I should think by the smoke, probably a farm building. The beggars!

P.S. My platoon sergeant has just thanked me on behalf of the platoon for the cigarettes.