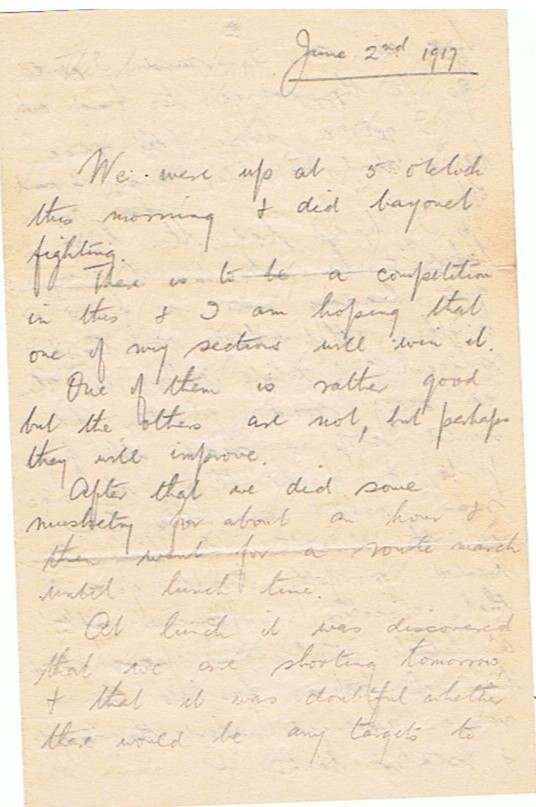 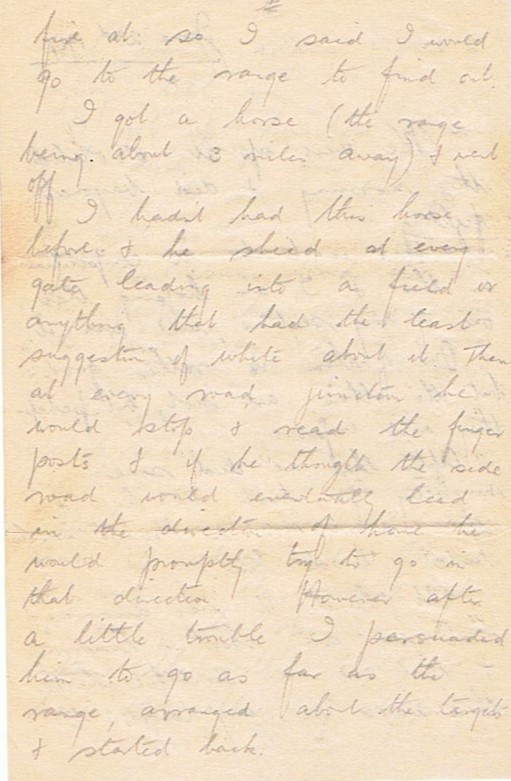 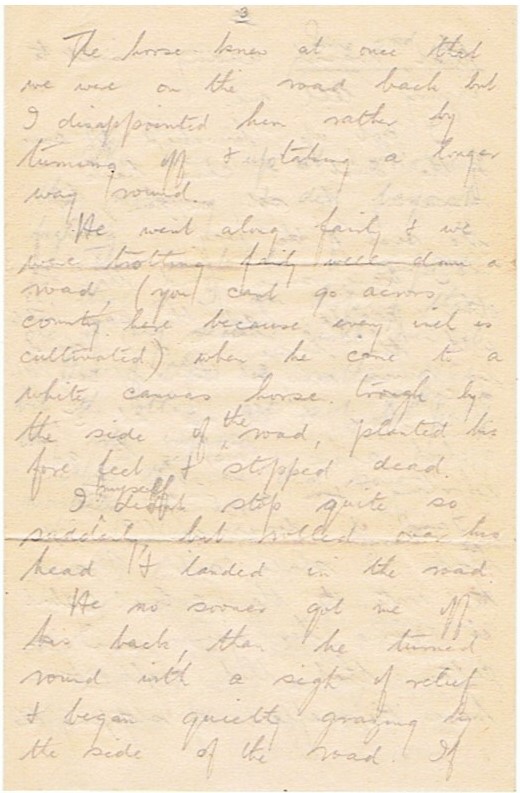 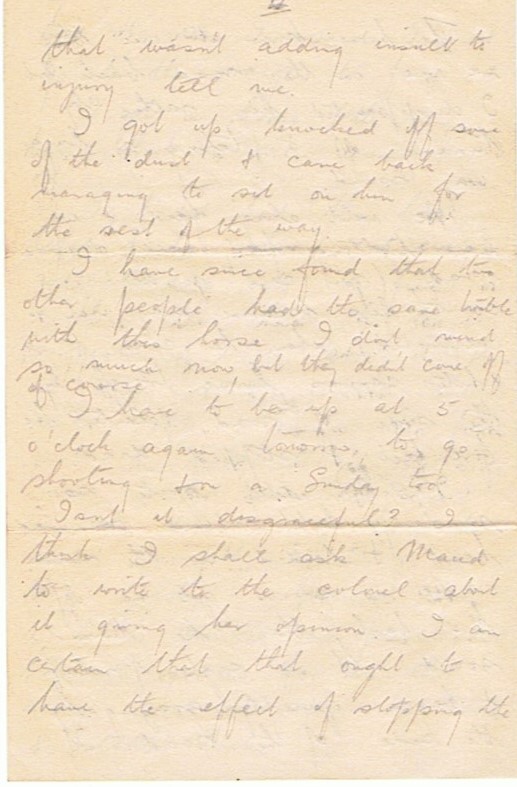 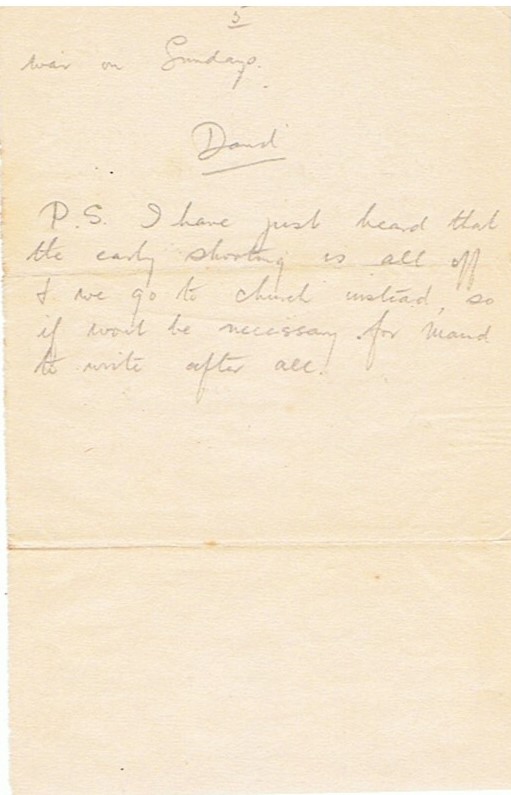 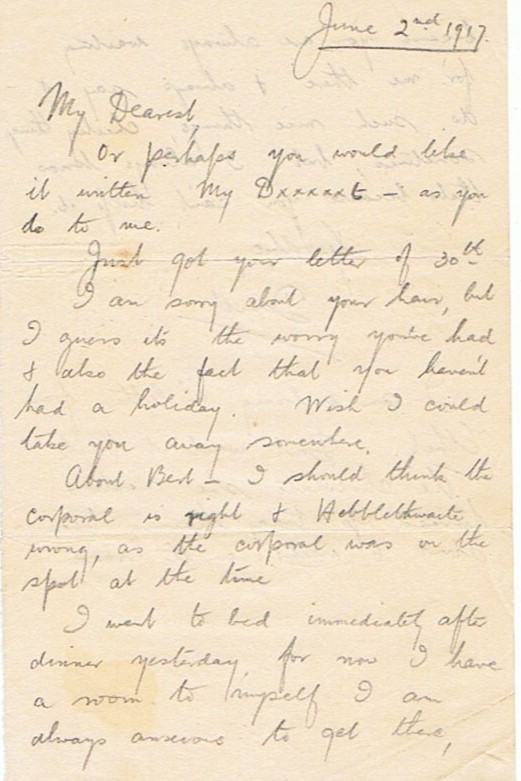 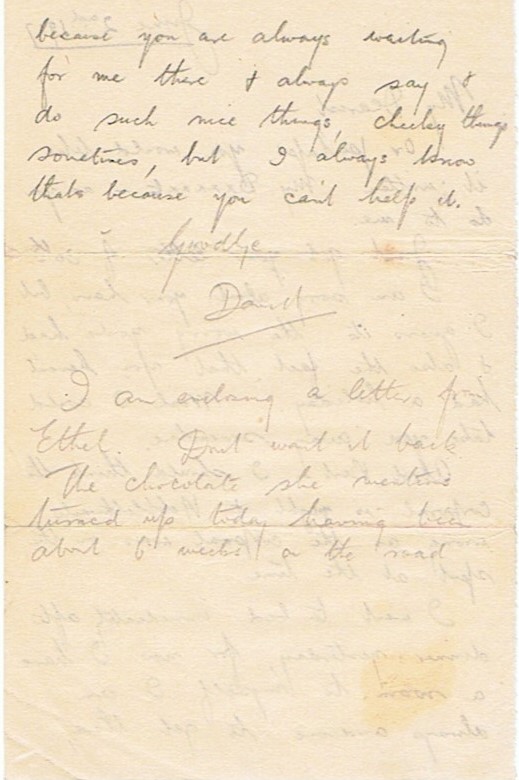 We were up at 5 o’clock this morning and did bayonet fighting.

There is to be a competition in this and I am hoping that one of my sections will win it.

One of them is rather good but the others are not, but perhaps they will improve.

After that we did some musketry for about an hour and then went for a route march until lunch time.

At lunch it was discovered that we are shooting tomorrow and that it was doubtful whether there would be any targets to fire at so I said I would go to the range to find out.

I got a horse (the range being about 3 miles away) and went off.

I hadn’t had this horse before and he shied at every gate leading into a field or anything that had the least suggestion of white about it. Then at every road junction he would stop and read the finger posts and if he thought the side road would eventually lead in the direction of home he would promptly try to go in that direction. However after a little trouble I persuaded him to go as far as the range, arranged about the targets and started back.

The horse knew at once that we were on the road back but I disappointed him rather by turning off and taking a longer way round. He went along fairly and we were trotting fairly well down a road (you can’t go across country here because every inch is cultivated) when he came to a white canvas horse trough by the side of the road, planted his fore feet and stopped dead.

I myself didn’t stop quite so suddenly but rolled over his head and landed in the road. He no sooner got me off his back then he turned round with a sigh of relief and began quietly grazing by the side of the road.

If that wasn’t adding insult to injury tell me.

I got up knocked off some of the dust and came back, managing to sit on him for the rest of the way.

I have since found that two other people had the same trouble with this horse. I don’t mind so much now, but they didn’t come off of course, I have to be up at 5 o’clock again tomorrow to go shooting and on a Sunday too. Isn’t it disgraceful? I think I shall ask Maud to write to the colonel about it giving her opinion. I am certain that that ought to have the effect of stopping the war on Sundays.

P.S. I have just heard that the early shooting is all off and we go to church instead, so it won’t be necessary for Maud to write after all.

Or perhaps you would like it written My Dxxxxxt – as you do to me.

Just got your letter of 30th.

I am sorry about your hair, but I guess its the worry you’ve had and also the fact that you haven’t had a holiday. Wish I could take you away somewhere.

About Bert – I should think the corporal is right and Hebblethwaite wrong, as the corporal was on the spot at the time.

I went to bed immediately after dinner yesterday, for now I have a room to myself and I am always anxious to get there, because you are always waiting for me there and always say and do such nice things, cheeky things sometimes, but I always know thats because you can’t help it.

I am enclosing a letter from Ethel. Don’t want it back. The chocolate she mentions turned up today having been about 6 weeks on the road.