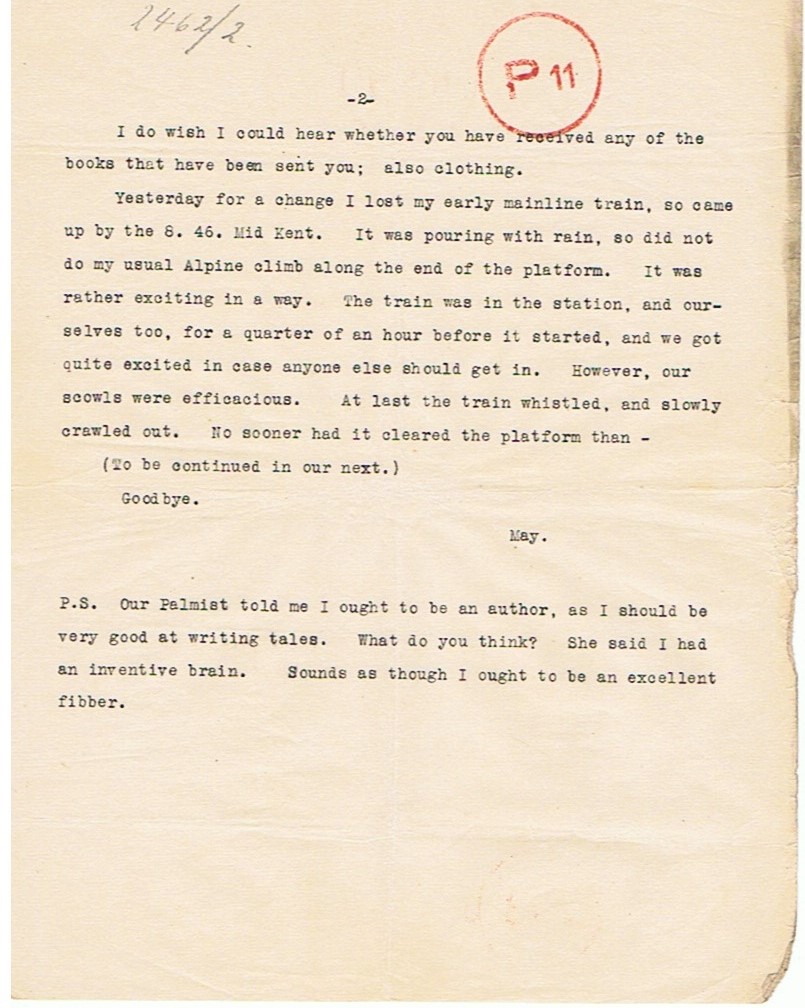 I have put by £8 this month (this is pay day), and that is all the news I have for you.

No, it isn’t. Last night a letter came from David Smith saying he is laid up with concussion of the brain owing to an accident, and that Esther and the children are away in Northants at a farm; he took them there last Sunday week, and was to have gone down last Sunday, only couldn’t on account of the accident, so he wrote and told Esther he was working on Sunday instead as he did not want her to worry about him; in fact, she would only come straight back with the children, and she is not due home till next Sunday, I think. I wrote him a short note this morning saying I was sorry he was queer, hoped it was nothing serious, that I would not tell Esther who was the most devoted wife and mother in existence, and that I would write and tell her how the Sale was going on. I wrote to her this morning, just mentioning that David had let me have her address, and told her I had made a red jersey and cap for a boy, and was now making a green jersey and tam o’shanter for boy, and that Mama was much better, also that our efforts in the Sale line exceeded £100.

Maud has just popped in. She is going to spend the next weekend with us, and is just like a child for excitement. She is the greatest oddity out, and you have no idea how amusing. She is so desperately earnest over everything, especially trivials, and is always changing her mind.

I do wish I could hear whether you have received any of the books that have been sent you; also clothing.

Yesterday for a change I lost my early mainline train, so came up by the 8.46 Mid Kent. It was pouring with rain, so did not do my usual Alpine climb along the end of the platform. It was rather exciting in a way. The train was in the station, and ourselves too, for a quarter of an hour before it started, and we got quite excited in case anyone else should get in. However, our scowls were efficacious. At last the train whistled, and slowly crawled out. No sooner had it cleared the platform than –
(To be continued in our next.)
Goodbye

P.S. Our Palmist told me I ought to be an author, as I should be very good at writing tales. What do you think? She said I had an inventive brain. Sounds as though I ought to be an excellent fibber.