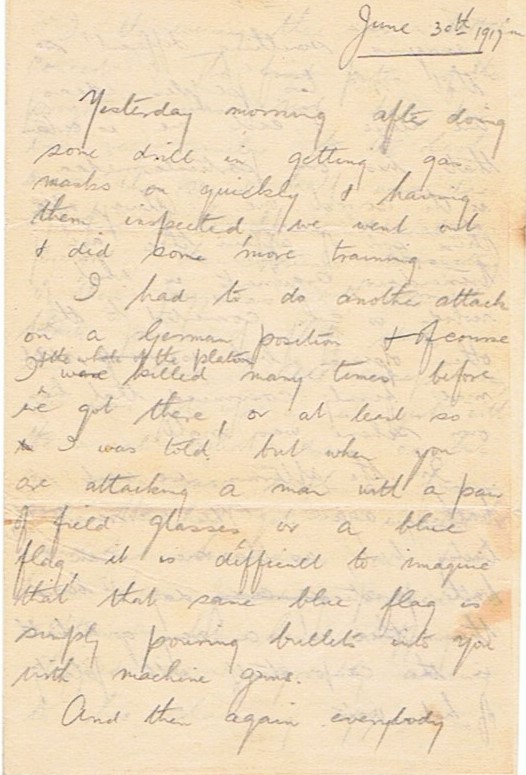 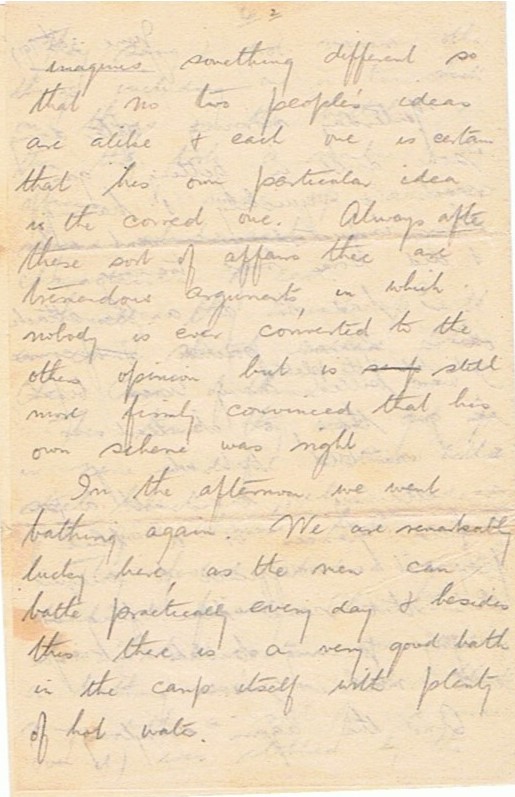 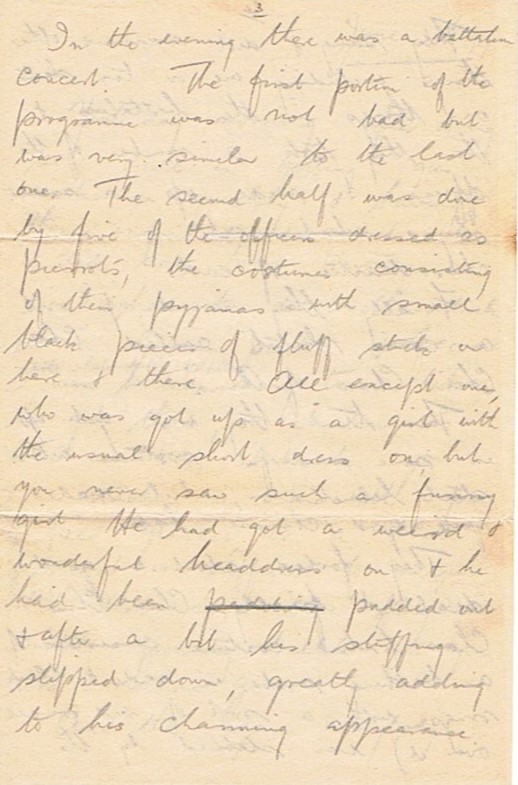 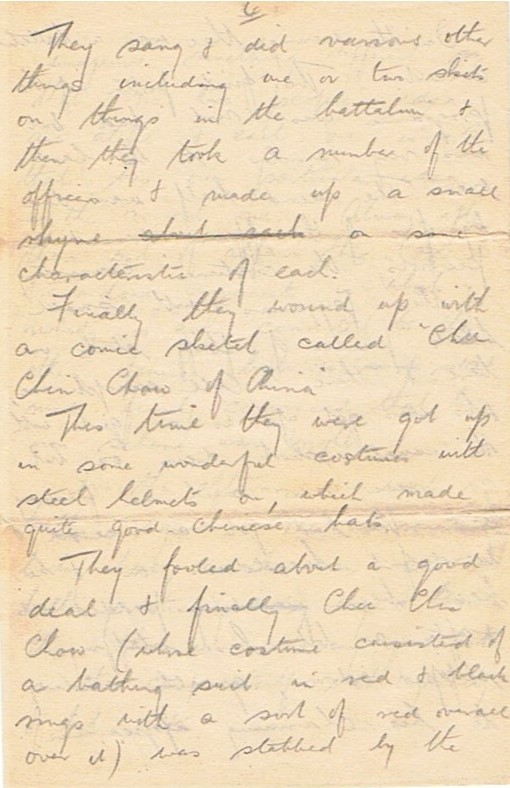 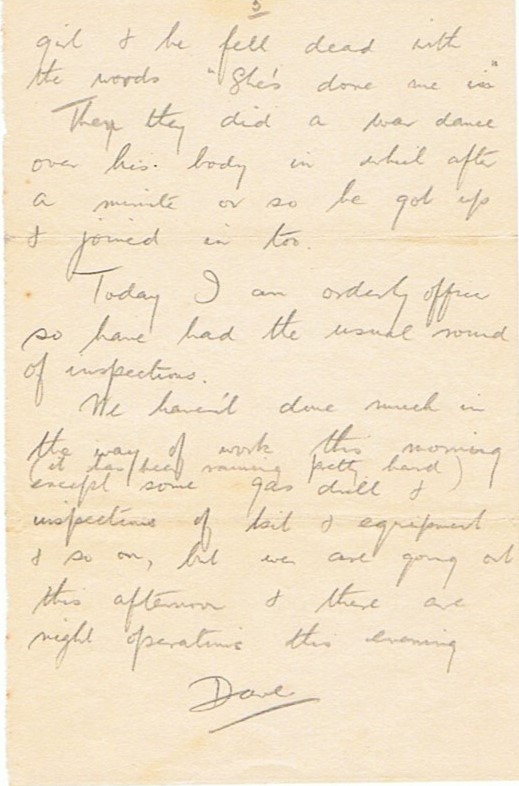 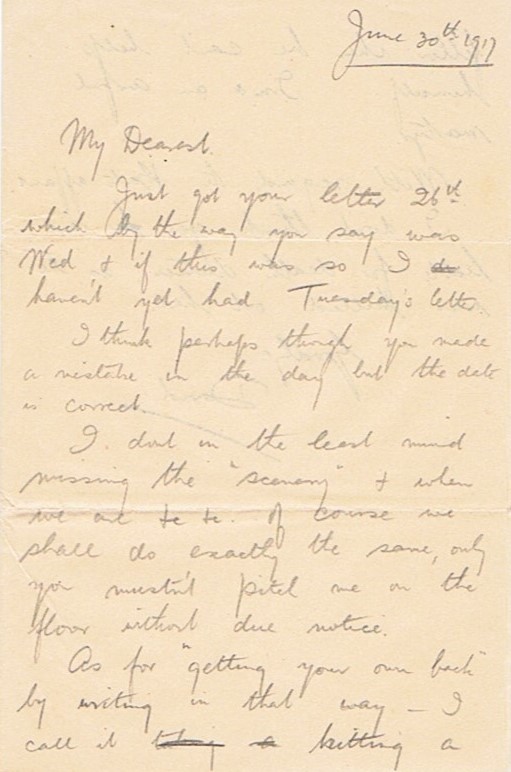 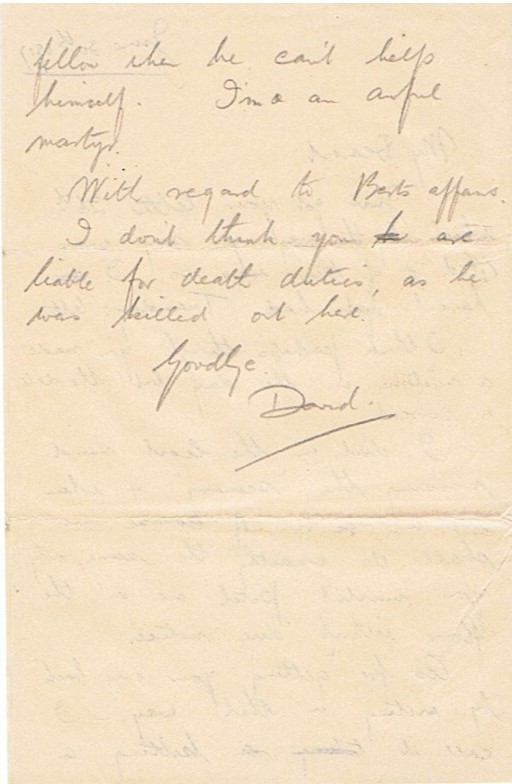 Yesterday morning after doing some drill in getting gas masks on quickly and having them inspected, we went out and did some more training.

I had to do another attack on a German position and of course I and the whole of the platoon were killed many times before we got there, or at least so I was told but when you are attacking a man with a pair of field glasses, or a blue flag, it is difficult to imagine that that same blue flag is simply pouring bullets into you with machine guns.

And then again everybody imagines something different so that no two people’s ideas are alike and each one is certain that his own particular idea is the correct one. Always after these sort of affairs there are tremendous arguments, in which nobody is ever converted to the other’s opinion but is still more firmly convinced that his own scheme was right.

In the afternoon we went bathing again. We are remarkably lucky here, as the men can bathe practically every day and besides this there is a very good bath in the camp itself with plenty of hot water.

In the evening there was a battalion concert. The first portion of the programme was not bad but was very similar to the last on. The second half was done by five of the officers dressed as pierrots, the costumes consisting of their pyjamas with small black pieces of fluff stuck on here and there. All except me, who was got up as a girl with the usual short dress on, but you never saw such a funny girl. He had got a weird and wonderful headdress on and he had been padded out and after a bit his stuffing slipped down, greatly adding to his charming appearance. They sang and did various other things including one or two skits on things in the battalion and then they took a number of the officers and made up a small rhyme on some characteristic of each.

Finally they wound up with a comic sketch called “Chu Chin Chow of China”. This time they were got up in some wonderful costumes with steel helmets on, which made quite good Chinese hats. They fooled about a good deal and finally Chu Chin Chow (whose costume consisted of a bathing suit in red and black rings with a sort of red overall over it) was stabbed by the girl and he fell dead with the words “She’s done me in”. Then they did a war dance over his body in which after a minute or so he got up and joined in too.

Today I am orderly officer so have had the usual round of inspections. We haven’t done much in the way of work this morning (it has been raining pretty hard) except some gas drill and inspections of kit and equipment and so on, but we are going out this afternoon and there are night operations this evening.

Just got your letter 26th which by the way you say was Wed and if was so I haven’t yet had Tuesday’s letter. I think perhaps though you made a mistake on the day but the date is correct.

I don’t in the least mind missing the “scenery” and when we are etc etc of course we shall do exactly the same, only you mustn’t pitch me on the floor without due notice.

As for “getting your own back” by writing in that way – I call it hitting a fellow when he can’t help himself. I’m an awful martyr.

With regard to Bert’s affairs: I don’t think you are liable for death duties as he was killed out here.