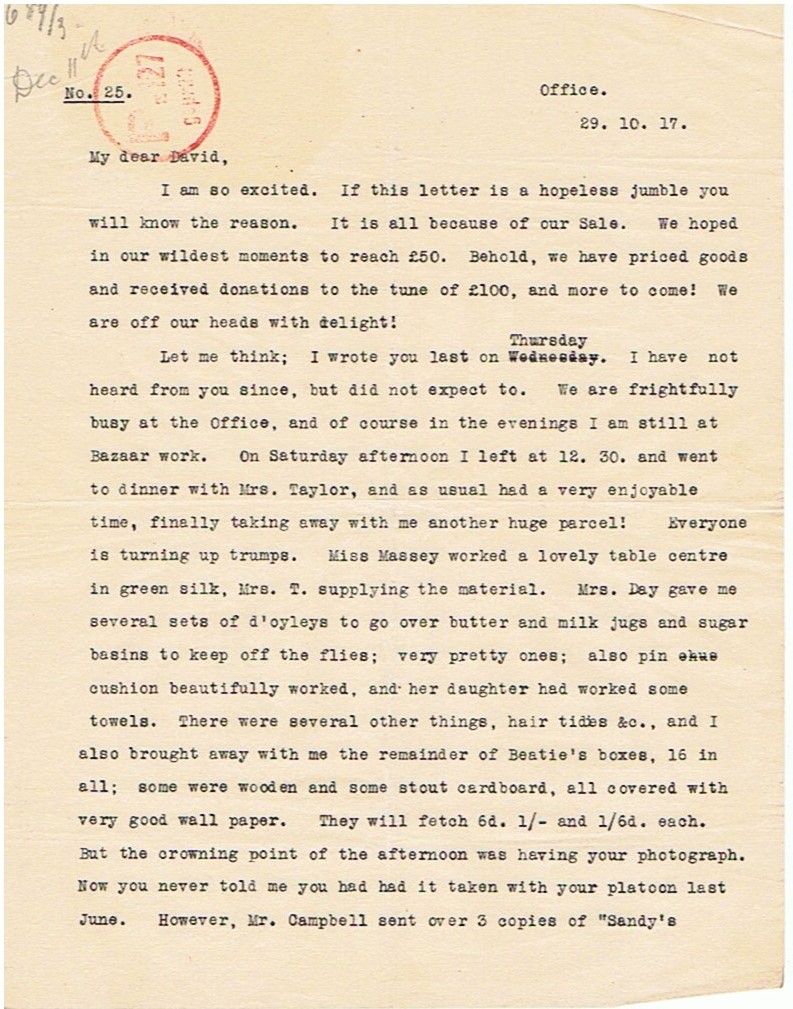 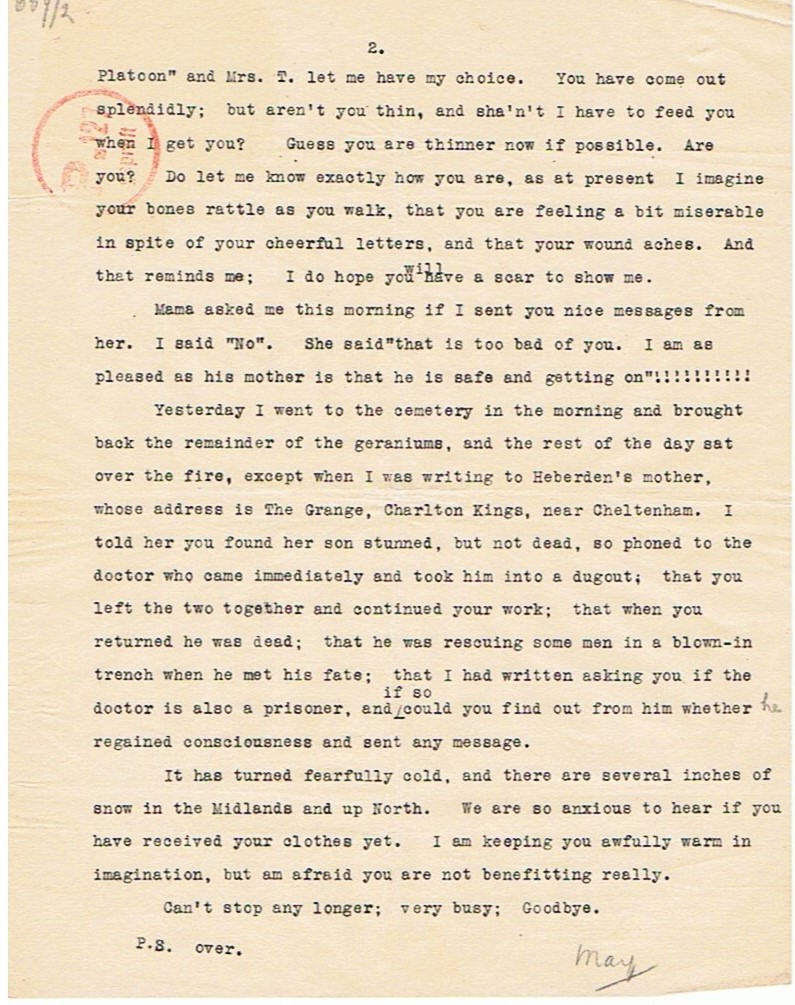 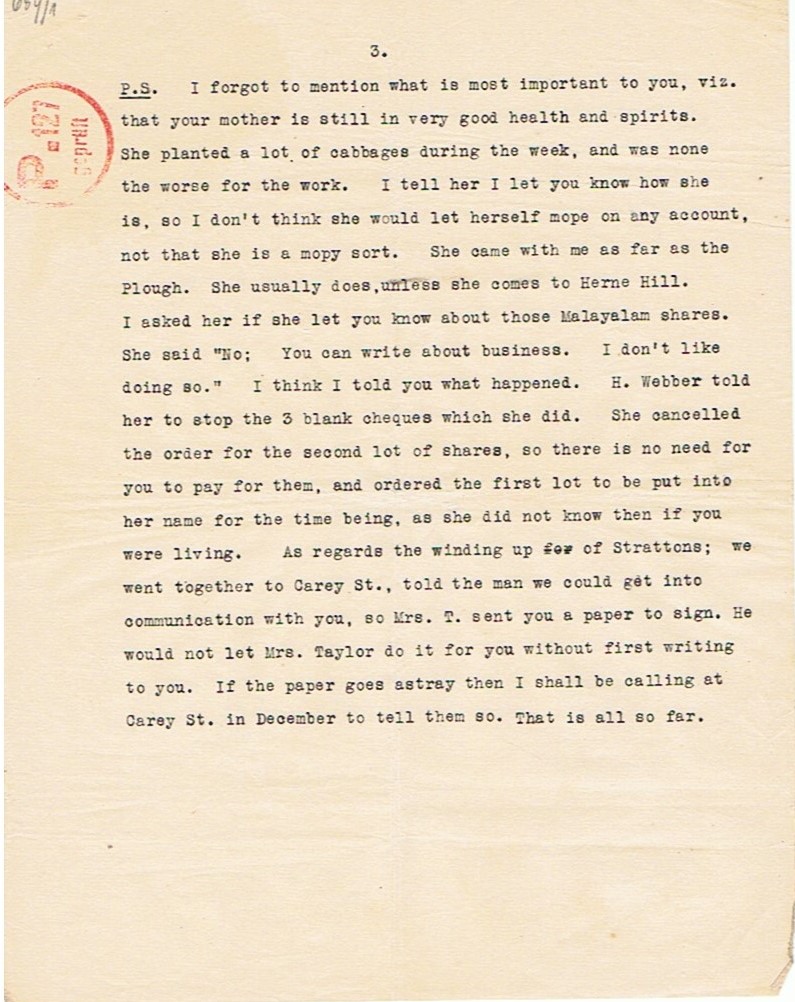 I am so excited. If this letter is a hopeless jumble you will know the reason. It is all because of our Sale. We hoped in our wildest moments to reach £50. Behold, we have priced goods and received donations to the tune of £100, and more to come! We are off our heads with delight!

Let me think; I wrote you last on Thursday. I have not heard from you since, but did not expect to. We are frightfully busy at the Office, and of course in the evenings I am still at Bazaar work. On Saturday afternoon I left at 12.30 and went to dinner with Mrs Taylor, and as usual had a very enjoyable time, finally taking away with me another huge parcel! Everyone is turning up trumps. Miss Massey worked a lovely table centre in green silk, Mrs T supplying the material. Mrs Day gave me several sets of d’oyleys to go over butter and milk jugs and sugar basins to keep off the flies; very pretty ones; also pin cushion beautifully worked, and her daughter had worked some towels. There were several other things, hair tidies &c., and I also brought away with me the remainder of Beatie’s boxes, 16 in all; some were wooden and some stout cardboard, all covered with very good wall paper. They will fetch 6d. 1/- and 1/6d. each. But the crowning point of the afternoon was having your photograph. Now you never told me you had it taken with your platoon last June. However, Mr Campbell sent over 3 copies of “Sandy’s Platoon” and Mrs Taylor let me have my choice. You have come out splendidly; but aren’t you thin, and shan’t I have to feed you when I get you? Guess you are thinner now if possible. Are you? Do let me know exactly how you are, as at present I imagine your bones rattle as you walk, that you are feeling a bit miserable in spite of your cheerful letters, and that your wound aches. And that reminds me; I do hope you will have a scar to show me.

Mama asked me this morning if I sent you nice messages from her. I said “No”. She said “that was too bad of you. I am as pleased as his mother is that he is safe and getting on” !!!!!!!!!!

Yesterday I went to the cemetery in the morning and brought back the remainder of the geraniums, and the rest of the day sat over the fire, except when I was writing to Heberden’s mother, whose address is The Grange, Charlton Kings, near Cheltenham. I told her you found her son stunned, but not dead, so phoned to the doctor who came immediately and took him to the dugout; that you left the two together and continued your work; that when you returned he was dead; that he was rescuing some men in a blown-in trench when he met his fate; that I had written asking you if the doctor is also a prisoner, and if so could you find out from him whether he regained consciousness and sent any message.

It has turned fearfully cold, and there are several inches of snow in the Midlands and up North. We are so anxious to hear if you have received your clothes yet. I am keeping you awfully warm in imagination, but am afraid you are not benefitting really.

P.S. I forgot to mention what is most important to you, viz. that your mother is still in very good health and spirits. She planted a lot of cabbages during the week, and was none the worse for the work. I tell her I let you know how she is, so I don’t think she would let herself mope on any account, not that she is the mopy sort. She came with me as far as the Plough. She usually does, unless she comes to Herne Hill. I asked her if she let you know about those Malayalam shares. She said “No; you can write about business. I don’t like doing so.” I think I told you what happened. H. Webber told her to stop the 3 blank cheques which she did. She cancelled the order for the second lot of shares, so there is no need for you to pay for them, and ordered the first lot to be put into her name for the time being, as she did not know then if you were living. As regards the winding up of Strattons; we went together to Carey St., told the man we could get into communication with you, so Mrs T sent you a paper to sign. He would not let Mrs T do it for you without first writing to you. If the paper goes astray then I shall be calling at Carey St. in December to tell them so. That is all so far.