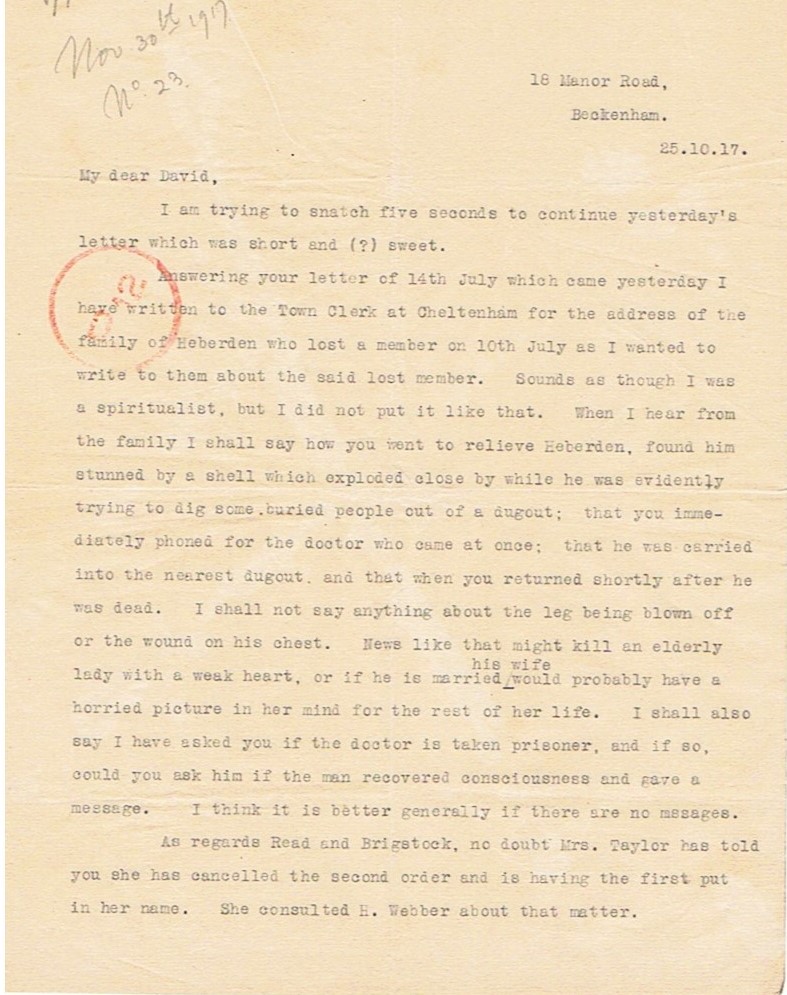 I am trying to snatch five seconds to continue yesterday’s letter which was short and (?) sweet.

Answering your letter of 14th July which came yesterday I have written to the Town Clerk at Cheltenham for the address of the family of Heberden who lost a member on 19th July as I wanted to write to them about the said lost member. Sounds as though I was a spiritualist, but I did not put it like that. When I hear from the family I shall say how you went to relieve Heberden, found him stunned by a shell which exploded close by while he was evidently trying to dig some buried people out of a dugout; that you immediately phoned for the doctor who came at once; that he was carried into the nearest dugout, and that when you returned shortly after he was dead. I shall not say anything about the leg being blown off or the wound on his chest. News like that might kill an elderly lady with a weak heart, or if he is married his wife would probably have a horrid picture in her mind for the rest of her life. I shall also say that I have asked you if the doctor is taken prisoner, and if so, could you ask him if the man recovered consciousness and gave a message. I think it is better generally if there are no messages.

As regards Read and Brigstock, no doubt Mrs Taylor has told you she has cancelled the second order and is having the first put in her name. She consulted H. Webber about this matter.

I have had a letter from Mrs Taylor this morning, and have written saying I shall be over to dinner on Saturday. Maud is coming to stay the weekend with us the week after.

It was too windy to sleep last night, so I dreamt instead, which was nicer. I imagined I put a necklace of V.C’s round your neck, and then something else. The V.C’s were as thick as beads, but you calmly said you preferred the something else. When I called you to order you said “Bosh” and –        . No, I won’t say the rest. Think of the censors!

We have had heaps of things in today for the bazaar, and a couple of cheques. Goods priced and money received now amount to over £60, and more to come! Haven’t I been plaguing folks? Thank your lucky stars you are in Germany and so safely away from it all!