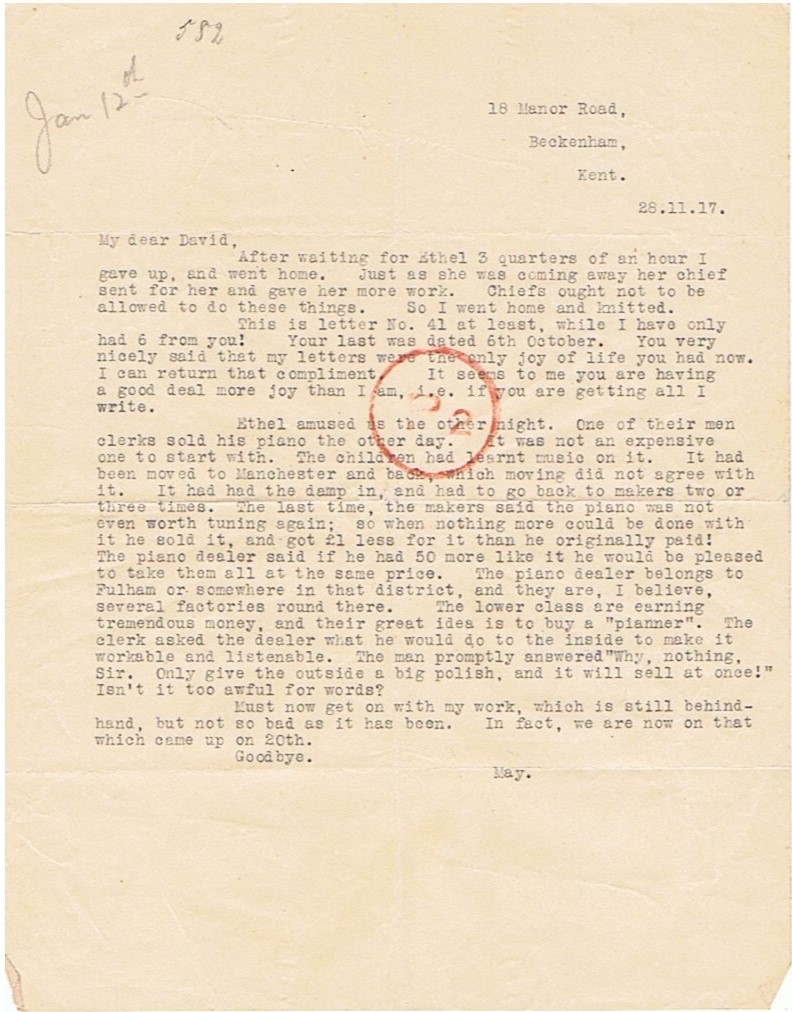 After waiting for Ethel 3 quarters of an hour I gave up, and went home. Just as she was coming away her chief sent for her and gave her more work. Chiefs ought not to be allowed to do these things. So I went home and knitted.

This is letter No. 41 at least, while I have only had 6 from you! Your last was dated 6th October. You very nicely said that my letters were the only joy of life you had now. I can return that compliment. It seems to me you are having a good deal more joy than I am, i.e. if you are getting all I write.

Ethel amused us the other night. One of their men clerks sold his piano the other day. It was not an expensive one to start with. The children had learnt music on it. It had been moved to Manchester and back, which moving did not agree with it. It had had the damp in, and had to go back to makers two or three times. The last time, the makers said the piano was not even worth tuning again; so when nothing more could be done with it he sold it, and got £1 less for it than he originally paid! The piano dealer said if he had 50 more like it he would be pleased to take them all at the same price. The piano dealer belongs to Fulham or somewhere in that district, and they are, I believe, several factories around there. The lower classes are earning tremendous money, and their great idea is to buy a “pianner”. The clerk asked the dealer what he would do to the inside to make it workable and listenable. The man promptly answered “Why, nothing, Sir. Only give the outside a big polish, and it will sell at once!” Isn’t too awful for words?

Must now get on with my work, which is still behindhand, but not so bad as it has been. In fact, we are now on that which came up on 20th.