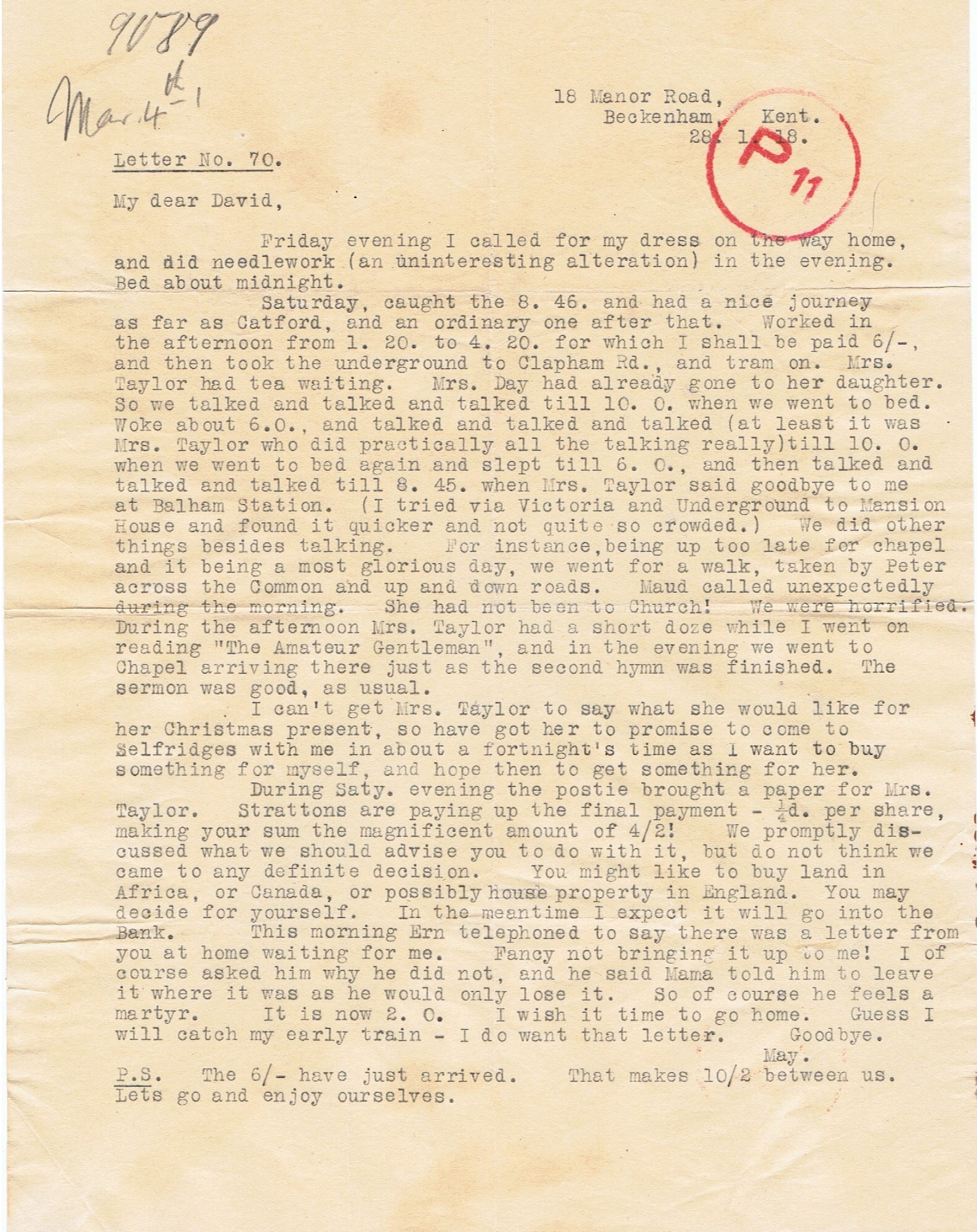 May to David 18 Manor Road Beckenham Kent. 28.1.18 Letter No. 70.
My dear David,
Friday evening I called for my dress on the home, and did needlework (an uninteresting alteration) in the evening. Bed about midnight.
Saturday, caught the 8.46. and had a nice journey as far as Catford, and an ordinary one after that. Worked in the afternoon from 1.20. to 4.20. for which I shall be paid 6/-, and then took the underground to Clapham Rd., and tram on. Mrs. Taylor had tea waiting. Mrs. Day had already gone to her daughter. So we talked and talked and talked till 10.0. when we went to bed. Woke about 6.0., and talked and talked and talked (at least it was Mrs. Taylor who did practically all the talking really) till 10.0. when we went to bed again and slept till 6. 0., and then talked and talked and talked till 8.45. when Mrs. Taylor said goodbye to me at Balham Station. (I tried via Victoria and Underground to Mansion House and found it quicker and not quite so crowded.) We did other things besides talking. For instance, being up too late for chapel and it being a most glorious day, we went for a walk, taken by Peter across the Common and up and down roads. Maud called unexpectedly during the morning. She had not been to Church! We were horrified. During the afternoon Mrs Taylor had a short doze while I went on reading “The Amateur Gentleman”, and in the evening we went to Chapel arriving there just as the second hymn was finished. The sermon was good, as usual. ‘
I can’t get Mrs. Taylor to say what she would like for her Christmas present, so have got her to promise to come to Selfridges with me in about a fortnight’s time as I want to buy something for myself, and hope then to get something for her.
During Saturday evening the postie brought a paper for Mrs. Taylor. Strattons are paying up the final payment – 1/4d. per share, making your sum the magnificent amount of 4/2! We promptly discussed what we should advise you to do with it, but do not think we came to any definite decision. You might like to buy land in Africa, or Canada, or possibly house property in England. You may decide for yourself. In the meantime I expect it will go into the Bank. This morning Ern telephoned to say there was a letter from you at home waiting for me. Fancy not bringing it up to me! I of course asked him why he did not, and he said Mama told him to leave it where it was as he would only lose it. So of course he feels a martyr. It is now 2. 0. I wish it time to go home. Guess I will catch my early train – I do want that letter. Goodbye.
May
P.S. The 6/- have just arrived. That makes 10/2 between us. Lets go and enjoy ourselves.