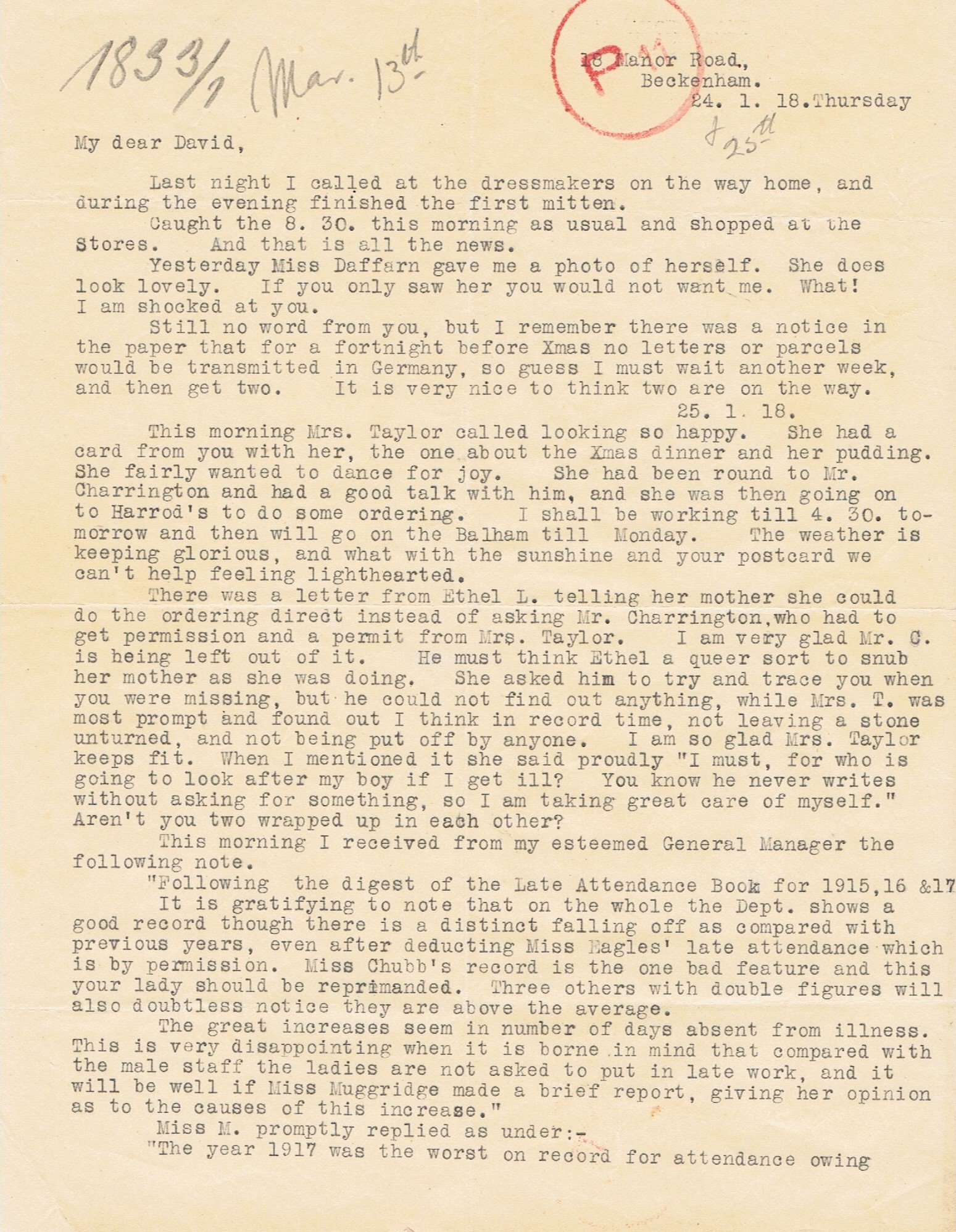 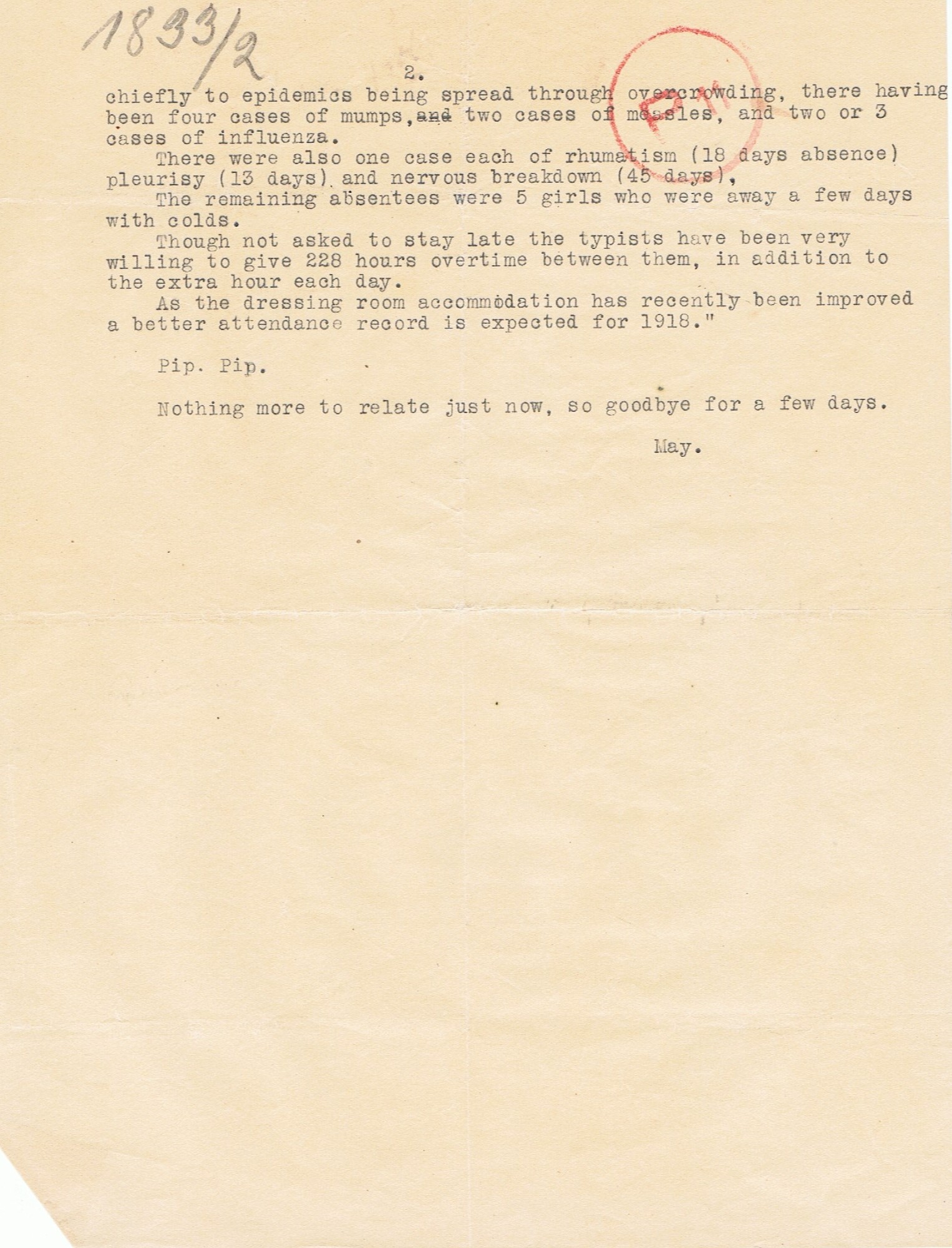 May to David Beckenham 24.1.18 Thursday
My dear David,
Last night I called at the dressmakers on the way home, and during the evening finished the first mitten.
Caught the 8.30. this morning as usual and shopped at the Stores. And that is all the news.
Yesterday Miss Daffarn gave me a photo of herself. She does look lovely. If you only saw her you would not want me. What! I am shocked at you.
Still no word from you, but I remember there was a notice in the paper that for a fortnight before Xmas no letters or parcels would be transmitted in Germany, so guess I must wait another week, and then get two. It is very nice to think two are on the way.
25. 1. 18.
This morning Mrs. Taylor called looking so happy. She had a card from you with her, the one about the Xmas dinner and her pudding. She fairly wanted to dance for joy. She had been round to Mr. Charrington and had a good talk with him, and she was then going on to Harrod’s to do some ordering. I shall be working till 4.30. to-morrow and then will go on the Balham till Monday. The weather is keeping glorious, and what with the sunshine and your postcard we can’t help feeling lighthearted.
There was a letter from Ethel L. telling her mother she could do the ordering direct instead of asking Mr. Charrington, who had to get permission and a permit from Mrs. Taylor. I am very glad Mr. C. is being left out of it. He must think Ethel a queer sort to snub, her mother as she was doing. She asked him to try and trace you when you were missing, but he could not find out anything, while Mrs. T. was most prompt and found out I think in record time, not leaving a stone unturned, and not being put off by anyone. I am so glad Mrs. Taylor keeps fit. When I mentioned it she said proudly “I must, for who is going to look after my boy if I get ill? You know he never writes without asking for something, so I am taking great care of myself.” Aren’t you two wrapped up in each other?
This morning I received from my esteemed General Manager the following note.
“Following the digest of the Late Attendance Book for 1915, 16 & 17
It is gratifying to note that on the whole the Dept. shows a good record though there is a distinct falling off as compared with previous years, even after deducting Miss Eagles’ late attendance which is by permission. Miss Chubb’s record is the one bad feature and this your lady should be reprimanded. Three others with double figures will also doubtless notice they are above the average.
The great increases seem in number of days absent from illness. This is very disappointing when it is borne in mind that compared with the male staff the ladies are not asked to put in late work, and it will be well if Miss Muggridge made a brief report, giving her opinion as to the causes of this increase.”
Miss Y. promptly replied as under:-
“The year 1917 was the worst on record for attendance owing chiefly to epidemics being spread through overcrowding, there have been four cases of mumps, two cases of measles, and two or 3 cases of influenza.
There were also one case each of rheumatism (18 days absence), pleurisy (13 days) and nervous breakdown (45 days).
The remaining absentees were 5 girls who were away a few days with colds.
Though not asked to stay late the typists have been very willing to give 228 hours overtime between them, in addition to the extra hour each day.
As the dressing room accommodation has recently been improved a better attendance record is expected for 1918.”
Pip. Pip.
Nothing more to relate just now, so goodbye for a few days.
May