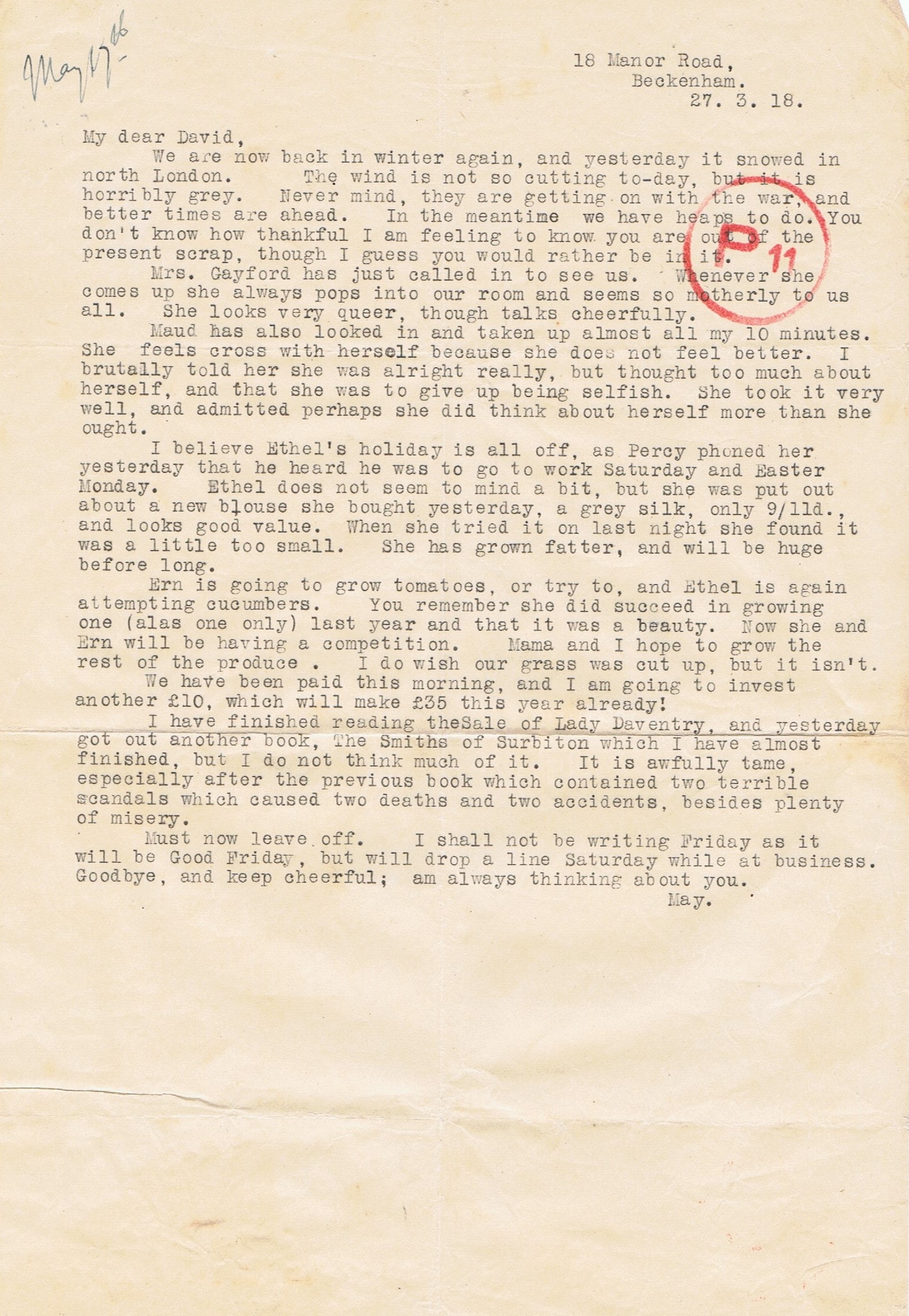 May to David 27.3.18
My dear David,
We are now back in winter again, and yesterday it snowed in north London. The wind is not so cutting today, but it is horribly grey. Never mind, they are getting on with the war, and better times are ahead. In the meantime we have heaps to do. You don’t know how thankful I am feeling to know you are out of the present scrap, though I guess you would rather be in it.
Mrs Grayford has just called in to see us. Whenever she comes up she always pops into our room and seems so motherly to us all. She looks very queer, though talks cheerfully.
Maud has also looked in and taken up almost all my 10 minutes. She feels cross with herself because she does not feel better. I brutally told her she was alright really, but thought too much about herself, and that she was to give up being selfish. She took it very well, and admitted perhaps she did think about herself more than she ought.
I believe Ethel’s holiday is all off, as Percy phoned her yesterday that he heard he was to go to work Saturday and Easter Monday. Ethel does not seem to mind a bit, but she was put out about a new blouse she bought yesterday, a grey silk, only 9/11d, and looks good value. When she tried it on last night she found it was a little too small. She has grown fatter, and will be huge before long.
Ern is going to grow tomatoes, or try to, and Ethel is again attempting cucumbers. You remember she did succeed in growing one (alas one only) last year and that it was a beauty. Now she and Ern will be having a competition. Mama and I hope to grow the rest of the produce. I do wish our grass was cut up, but it isn’t.
We have been paid this morning, and I am going to invest another £10, which will make £35 this year already!
I have finished reading the Sale of Lady Daventry, and yesterday got out another book, The Smiths of Surbiton which I have almost finished, but I do not think much of it. It is awfully tame, especially after the previous book which contained two terrible scandals which caused two deaths and two accidents, besides plenty of misery.
Must now leave off. I shall not be writing Friday as it will be Good Friday, but will drop a line Saturday while at business. Goodbye, and keep cheerful; am always thinking about you.
May.