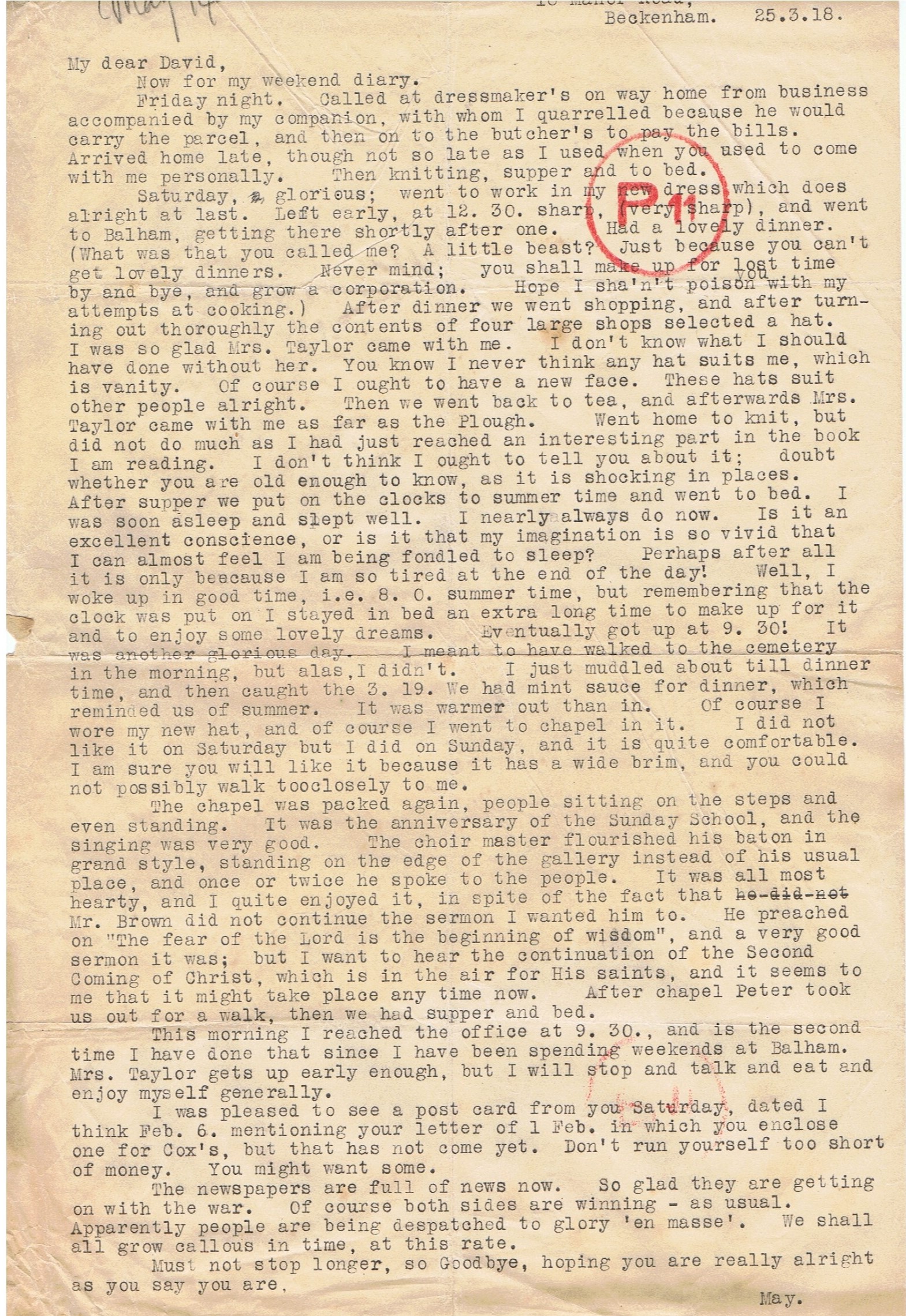 May to David 25.3.18
My dear David,
Now for my weekend diary.
Friday night. Called at dressmaker’s on way home from business accompanied by my companion, with whom I quarrelled because he would carry the parcel, and then on to the butcher’s to pay the bills. Arrived home late, though not so late as I used when you used to come with me personally. Then knitting, supper and to bed.
Saturday, glorious; went to work in my new dress which does alright at last. Left early, at 12.30 sharp, (very sharp), and went to Balham, getting there shortly after one. Had a lovely dinner. (what was that you called me? A little beast? Just because you can’t get lovely dinners. Never mind; you shall make up for lost time by and bye, and grow a corporation. Hope I shan’t poison you with my attempts at cooking.) After dinner we went shopping , and after turning out thoroughly the contents of four large shops selected a hat. I was so glad Mrs Taylor came with me. I don’t know what I should have done without her. You know I never think any hat suits me, which is vanity. Of course I ought to have a new face. These hats suit other people alright. Then we went back to tea, and afterwards Mrs Taylor came with me as far as the Plough. Went home to knit, but did not do much as I had just reached an interesting part in the book I am reading. I don’t think I ought to tell you about it; doubt whether you are old enough to know, as it is shocking in places. After supper we put on the clocks to summer time and went to bed. I was soon asleep and slept well. I nearly always do now. Is it an excellent conscience, or is it that my imagination is so vivid that I can almost feel I am being fondled to sleep? Perhaps after all it is only because I am so tired at the end of the day! Well, I woke up in good time, ie 8.0 summer time, but remembering that the clock was put on I stayed in bed an extra long time to make up for it and to enjoy some lovely dreams. Eventually got up at 9.30! It was another glorious day. I meant to have walked to the cemetery in the morning, but alas, I didn’t. I just muddled about til dinner time, and then caught the 3.19. We had mint sauce for dinner, which reminded us of summer. It was warmer out than in. Of course I wore my new hat, and of course I went to chapel in it. I did not like it on Saturday but I did on Sunday, and it is quite comfortable. I am sure you will like it because it has a wide brim, and you could not possibly walk too closely to me.
The chapel was packed again, people sitting on the steps and even standing. It was the anniversary of the Sunday School, and the singing was very good. The choir master flourished his baton in grand style, standing on the edge of the gallery instead of his usual place, and once or twice he spoke to the people. It was all most hearty, and I quite enjoyed it, in spite of the fact that Mr Brown did not continue the sermon I wanted him to. He preached on “The fear of the Lord is the beginning of wisdom”, and a very good sermon it was; but I wanted to hear the continuation of the Second Coming of Christ, which is in the air for His saints, and it seems to me that it might take place any time now. After chapel Peter took us out for a walk, and then we had supper and bed.
This morning I reached the office at 9.30, and is the second time I have done that since I have been spending weekends at Balham. Mrs Taylor gets up early enough, but I will stop and talk and eat and enjoy myself generally.
I was pleased to see a post card from you Saturday, dated I think Feb 6 mentioning your letter of 1 Feb in which you enclose one for Cox’s, but that has not come yet. Don’t run yourself too short of money. You might want some.
The newspapers are full of news now. So glad they are getting on with the war. Of course both sides are winning – as usual. Apparently people are being despatched to glory ‘en masse’. We shall all grow callous in time, at this rate.
Must not stop longer, hoping you are really alright as you say you are.
May