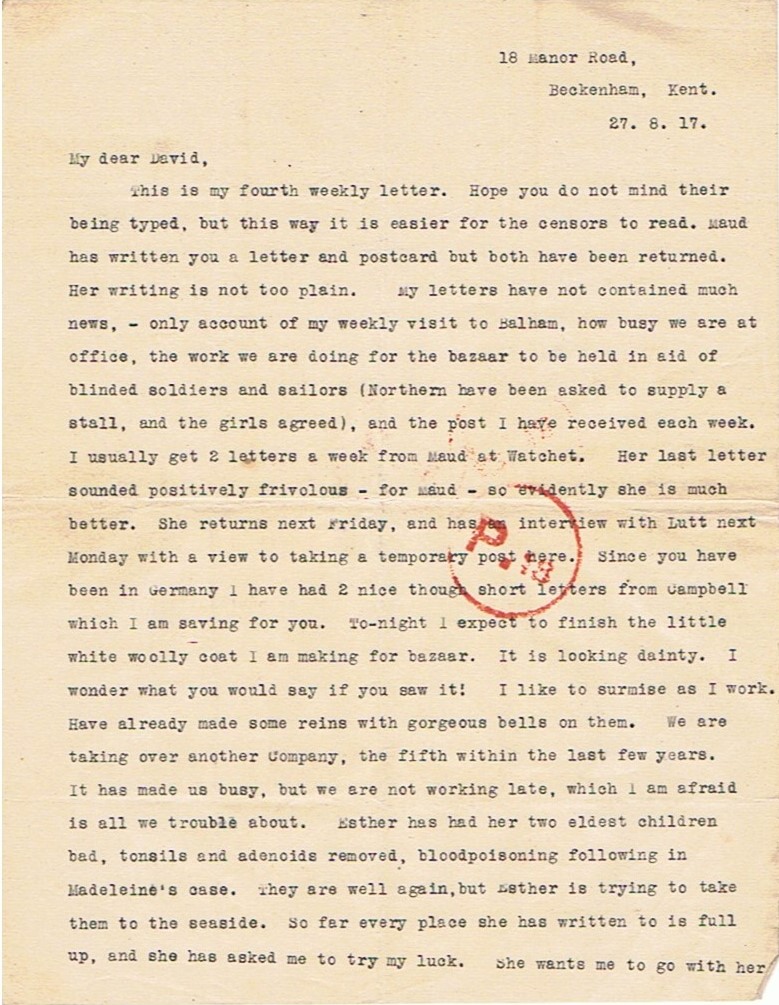 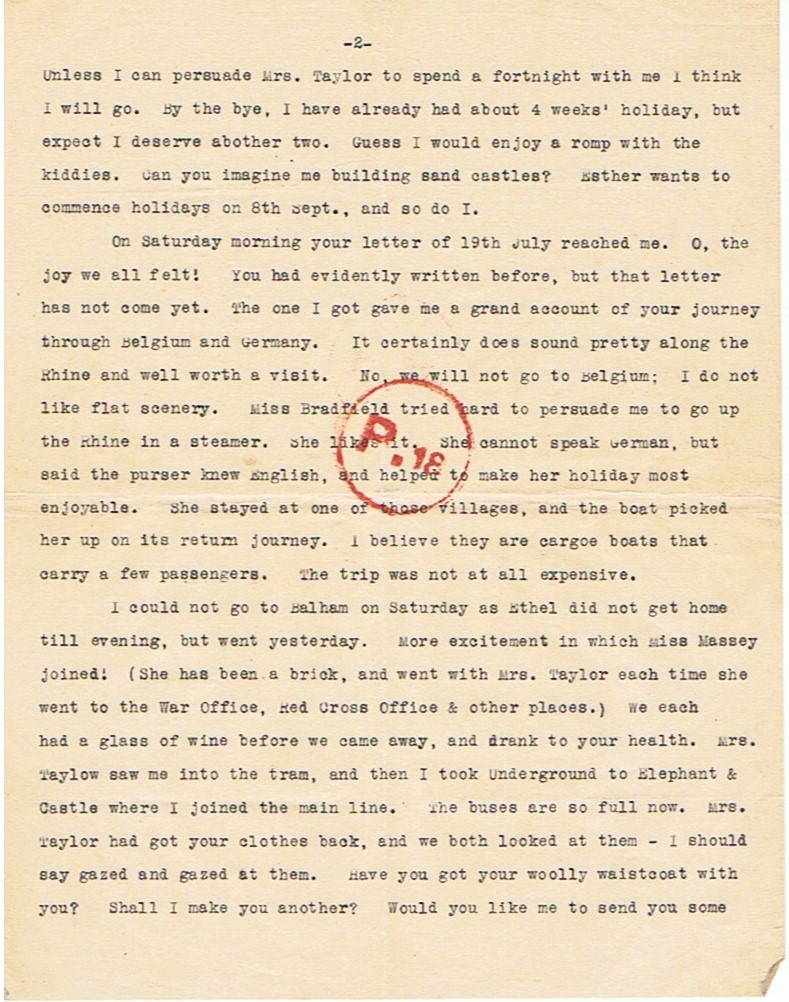 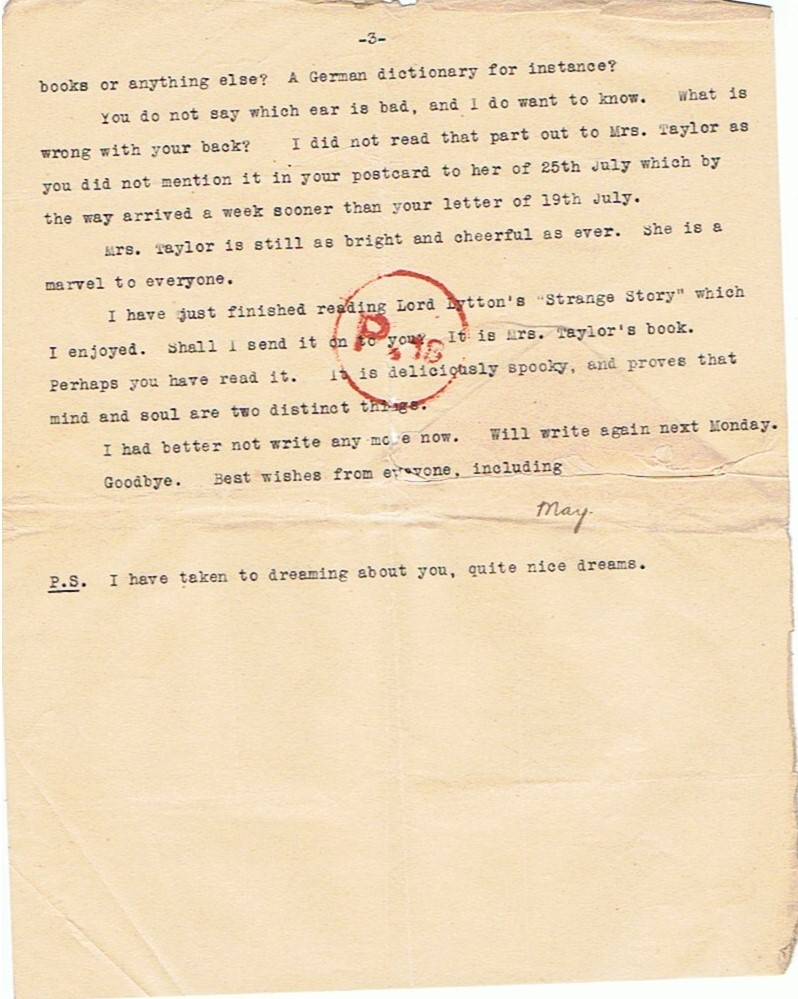 This is my fourth weekly letter. Hope you do not mind their being typed, but this way it is easier for the censors to read. Maud has written you a letter and postcard but both have been returned. Her writing is not too plain. My letters have not contained much news, only account of my weekly visit to Balham, how busy we are at office, the work we are doing for the bazaar to be held in aid of blinded soldiers and sailors (Northern have been asked to supply a stall, and the girls agreed), and the post I have received each week. I usually get 2 letters a week from Maud at Watchet. Her last letter sounded positively frivolous – for Maud – so evidently she is much better. She returns next Friday, and has an interview with Lutt next Monday with a view to taking a temporary post there. Since you have been in Germany I have had 2 nice though short letters from Campbell which I am saving for you. To-night I expect to finish the little white woolly coat I am making for bazaar. It is looking dainty. I wonder what you would say if you saw it! I like to surmise as I work. Have already made some reins with gorgeous bells on them. We are taking over another Company, the fifth within the last few years. It has made us busy, but we are not working late, which I am afraid is all we trouble about. Esther has had her two eldest children bad, tonsils and adenoids removed, blood poisoning following in Madeleine’s case. They are well again, but Esther is trying to take them to the seaside. So far every place she has written to is full up, and she has asked me to try my luck. She wants me to go with her. Unless I can persuade Mrs Taylor to spend a fortnight with me I think I will go. Be the bye, I have already had about 4 weeks’ holiday, but expect I deserve another two. Guess I would enjoy a romp with the kiddies. Can you imagine me building sand castles? Esther wants to commence holidays on 8th Sept, and so do I.

On Saturday morning your letter of 19th July reached me. O, the joy we all felt! You had evidently written before, but that letter has not come yet. The one I got gave me a grand account of your journey through Belgium and Germany. It certainly does sound pretty along the Rhine and well worth a visit. No, we will not go to Belgium; I do not like flat scenery. Miss Bradford tried hard to persuade me to go up the Rhine in a steamer. She likes it. She cannot speak German, but said the purser knew English, and helper to make her holiday most enjoyable. She stayed at one of those villages, and the boat picked her up on its return journey. I believe they are cargo boats that carry a few passengers. The trip was not at all expensive.

I could not go to Balham on Saturday as Ethel did not get home till evening, but went yesterday. More excitement in which Miss Massey joined! (She has been a brick, and went with Mrs Taylor each time she went to the War Office, Red Cross Office and other places). We each had a glass of wine before we came away, and drank to your health. Mrs Taylor saw me to the tram, and then I took Underground to Elephant & Castle where I joined the main line. The buses are so full now. Mrs Taylor had got your clothes back, and we both looked at them – I should say gazed and gazed at them. Have you got your woolly waistcoat with you? Shall I make you another? Would you like me to send you some books or anything else? A German dictionary for instance?

You do not say which ear is bad, and I do want to know. What is wrong with your back? I did not read that part out to Mrs Taylor as you did not mention it in your postcard to her of 25th July which by the way arrived a week sooner than your letter of 19th July.

Mrs Taylor is still as bright and cheerful as ever. She is a marvel to everyone.

I have just finished reading Lord Lytton’s “Strange Story” which I enjoyed. Shall I send it on to you? It is Mrs Taylor’s book. Perhaps you have read it. It is deliciously spooky, and proves that mind and soul are two distinct things.

I had better not write any more now. Will write again next Monday.

Goodbye. Best wishes from everyone, including

P.S. I have taken to dreaming about you, quite nice dreams.