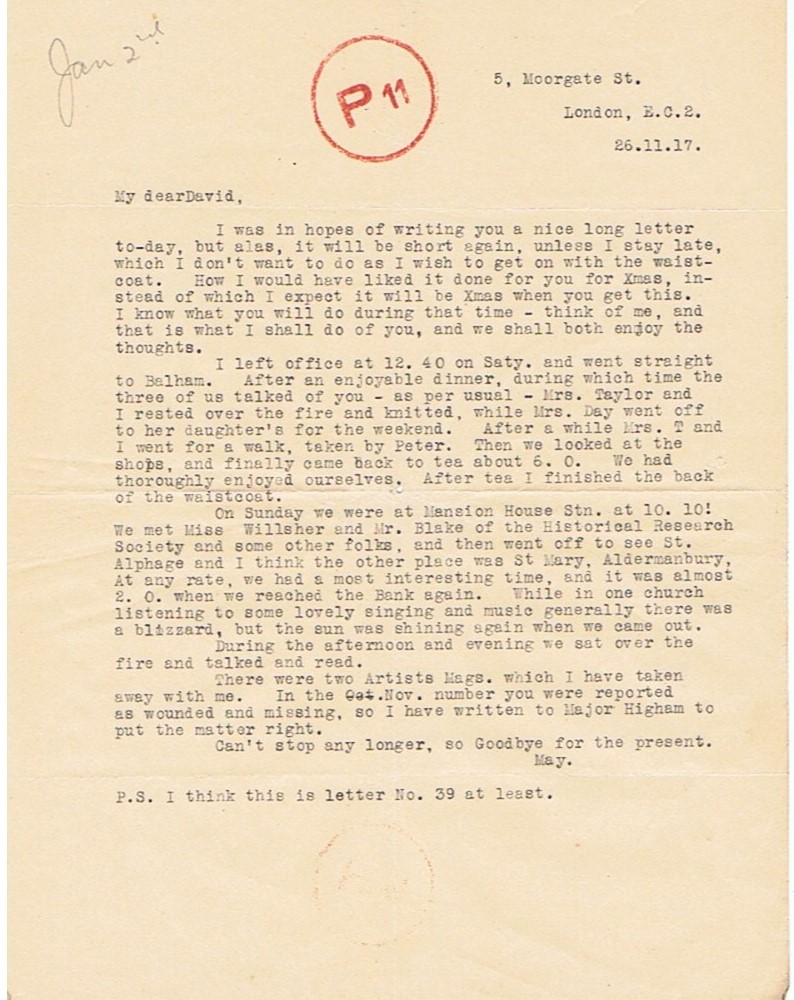 I was in hopes of writing you a nice long letter today, but alas, it will be short again, unless I stay late, which I don’t want to do as I wish to get on with the waistcoat. How I would have liked it done for you for Xmas, instead of which I expect it will be Xmas when you get this. I know what you will do during that time – think of me, and that is what I shall do of you, and we shall both enjoy the thoughts.

I left office at 12.40 on Saturday and went straight to Balham. After an enjoyable dinner, during which time the three of us talked of you – as per usual – Mrs Taylor and I rested over the fire and knitted, while Mrs Day went off to her daughter’s for the weekend. After a while Mrs T and I went for a walk, taken by Peter. Then we looked at the shops, and finally came back to tea about 6.0. We had thoroughly enjoyed ourselves. After tea I finished the back of the waistcoat.

On Sunday we were at Mansion House Stn at 10.10! We met Miss Willshire and Mr Blake of the Historical Research Society and some other folks, and then went off to see St Alphage and I think the other place was St Mary, Aldermanbury. At any rate, we had a most interesting time, and it was almost 2.0 when we reached the Bank again. While in one church listening to some lovely singing and music generally there was a blizzard, but the sun was shining again when we came out.

During the afternoon and evening we sat over the fire and talked and read.

There were two Artists Mags which I have taken away with me. In the Nov number you were reported as wounded and missing, so I have written to Major Higham to put the matter right.

Can’t stop any longer, so Goodbye for the present.