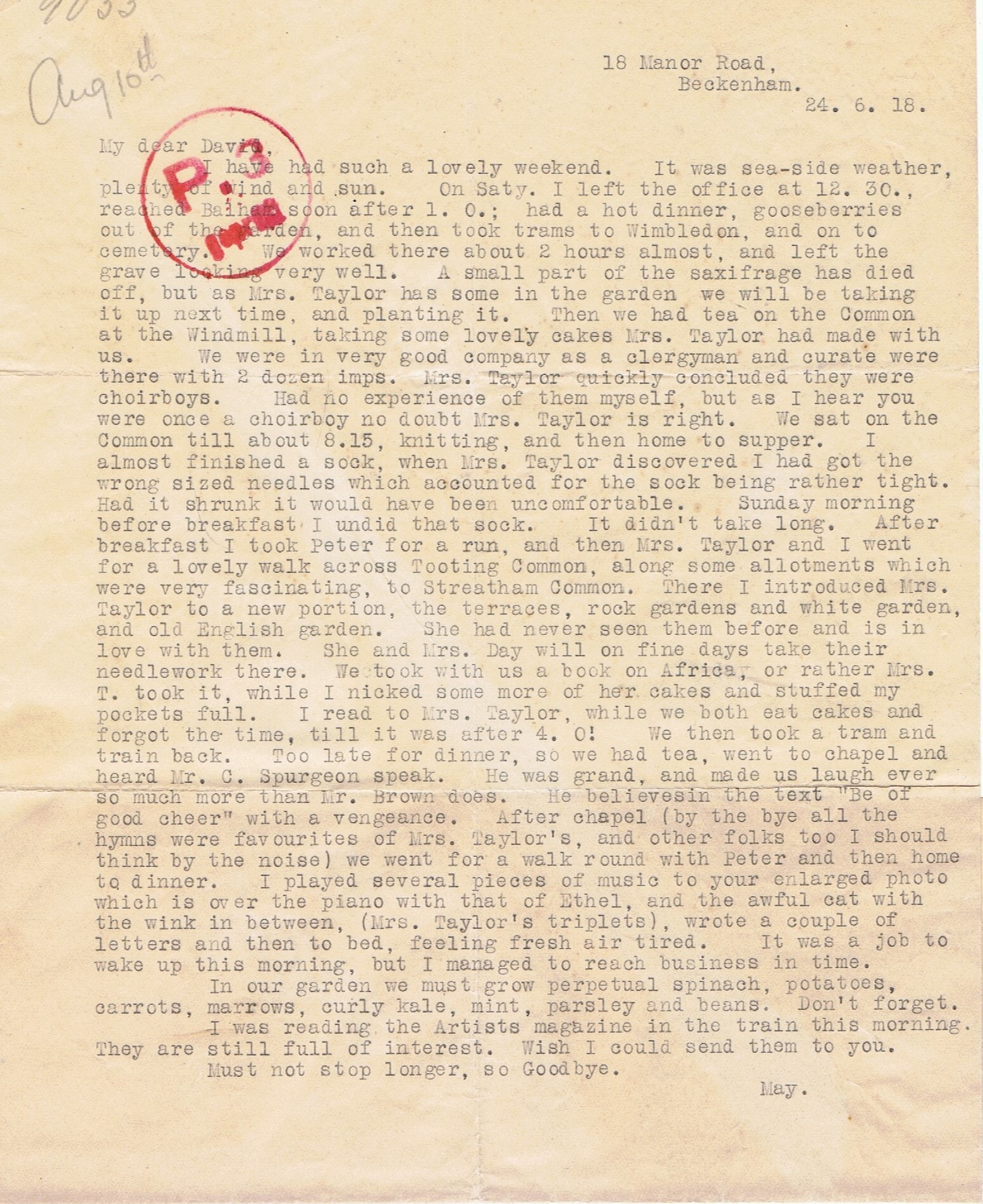 May to David Beckenham 24.6.18
My dear David,
I have had such a lovely weekend. It was sea-side weather, plenty of wind and sun. On Saty I left the office at 12.30, reached Balham soon after 1.0; hot a hot dinner, gooseberries out of the garden, and then took trams to Wimbledon, and on to cemetery. We worked there about 2 hours almost, and left the grave looking very well. A small part of the saxifrage has died off, but as Mrs Taylor has some in the garden we will be taking it up next time, and planting it. Then we had tea on the Common at the Windmill, taking some lovely cakes Mrs Taylor had made with us. We were in very good company as a clergyman and curate were there with 2 dozen imps. Mrs Taylor quickly concluded they were choirboys. Had no experience of them myself, but as I hear you were once a choirboy no doubt Mrs Taylor is right. We sat on the Common until about 8.15, knitting, and then came home to supper. I almost finished a sock, when Mrs Taylor discovered I had got the wrong sized needles which accounted for the sock being rather tight. Had it shrunk it would have been uncomfortable. Sunday morning before breakfast I undid that sock. It didn’t take long. After breakfast I took Peter for a run, and then Mrs Taylor and I went for a lovely walk across Tooting Common, along some allotments which were very fascinating, to Streatham Common. There I introduced Mrs Taylor to a new portion, the terraces, rock gardens and white garden, and old English garden. She had never seen them before and is in love with them. She and Mrs Day will on fine days take their needlework there. We took with us a book on Africa, or rather Mrs T took it, while I nicked some more of her cakes and stuffed my pockets full. I read to Mrs Taylor, while we both eat cakes and forgot the time, till it was after 4.0! We then took a tram and train back. Too late for dinner, so we had tea, went to chapel and heard Mr C Spurgeon speak. He was grand, and made us laugh ever so much more than Mr Brown does. He believes in the text “Be of good cheer” with a vengeance. After chapel (by the bye all the hymns were favourites of Mrs Taylor’s, and other folks too I should think by the noise) we went for a walk round with Peter and then home to dinner. I played several pieces of music to your enlarged photo which is over the piano with that of Ethel, and the awful cat with the wink between, (Mrs Taylor’s triplets), wrote a couple of letters and then to bed, feeling fresh air tired. It was a job to wake up this morning, but I managed to reach business in time.
In our garden we must grow perpetual spinach, potatoes, carrots, marrows, curly kale, mint, parsley and beans. Don’t forget.
I was reading the Artists magazine in the train this morning. They are still full of interest. Wish I could send them to you.
Must not stop longer, so Goodbye.
May