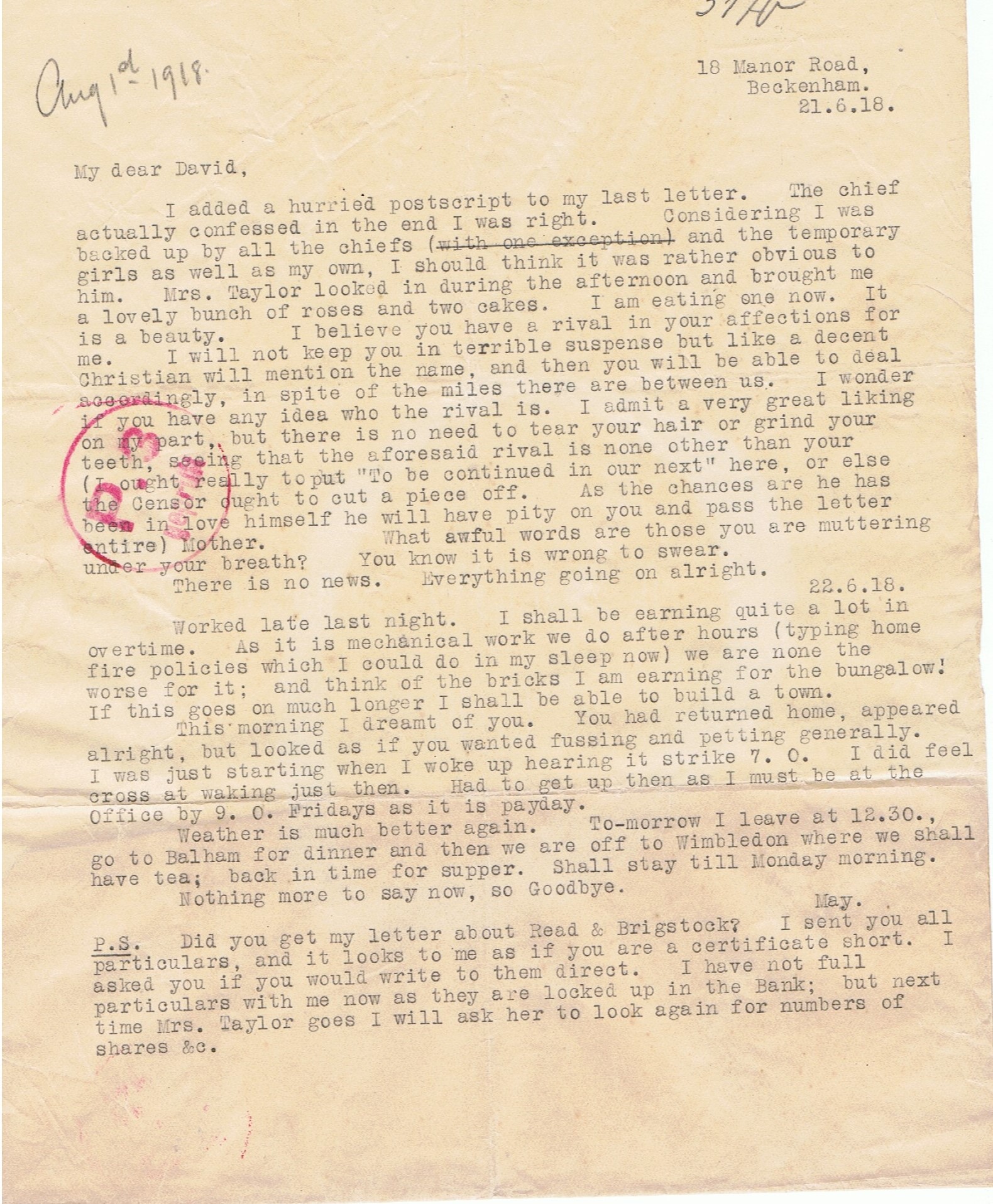 May to David Beckenham 21.6.18
My dear David,
I added a hurried postscript to my last letter. The chief actually confessed in the end I was right. Considering I was backed up by all the chiefs and the temporary girls as well as my own, I should think it was rather obvious to him. Mrs Taylor looked in during the afternoon and brought me a lovely bunch of roses and two cakes. I am eating one now. It is a beauty. I believe you have a rival in your affections for me. I will not keep you in a terrible suspense but like a decent Christian will mention the name, and then you will be able to deal accordingly, in spite of the miles there are between us. I wonder if you have any idea who the rival is. I admit a very great liking on my part, but there is no need to tear your hair or grind your teeth, seeing that the aforesaid rival is none other than your (I ought really to put “To be continued in our next” here, or else the Censor ought to cut a piece off. As the chances are he has been in love himself he will have pity on you and pass the letter entire) Mother. What awful words are those you are muttering under your breath? You know it is wrong to swear.
There is no news. Everything going on alright.
22.6.18
Worked late last night. I shall be earning quite a lot in overtime. As it is mechanical work we do after hours (typing home fire policies which I could do in my sleep now) we are none the worse for it; and think of the bricks I am earning for the bungalow! If this goes on much longer I shall be able to build a town.
This morning I dreamt of you. You had returned home, appeared alright, but looked as if you wanted fussing and petting generally. I was just starting when I woke up hearing it strike 7.0. I did feel cross at waking just then. Had to get up then as I must be at the Office by 9.0. Fridays as it is payday.
Weather is much better again. Tomorrow I leave at 12.30, go to Balham for dinner and then we are off to Wimbledon where we shall have tea; back in time for supper. Shall stay till Monday morning.
Nothing more to say now, so Goodbye.
May
PS Did you get my letter about Read & Brigstock? I sent you all particulars, and it looks to me as if you are a certificate short. I asked if you would write to them direct. I have not full particulars with me as they are locked up in the Bank; but next Mrs Taylor goes I will ask her to look again for numbers of shares etc.