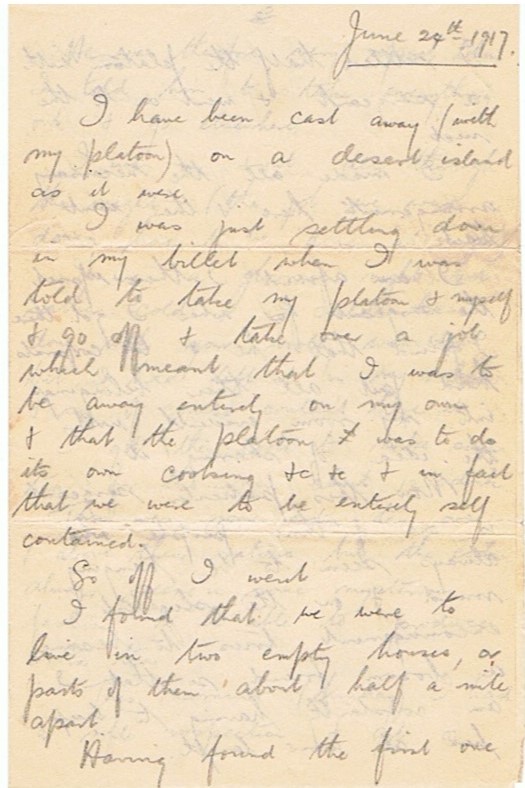 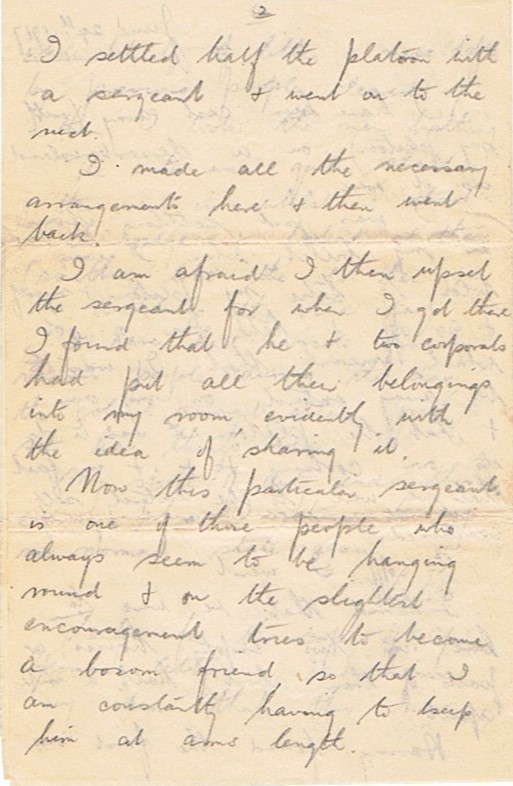 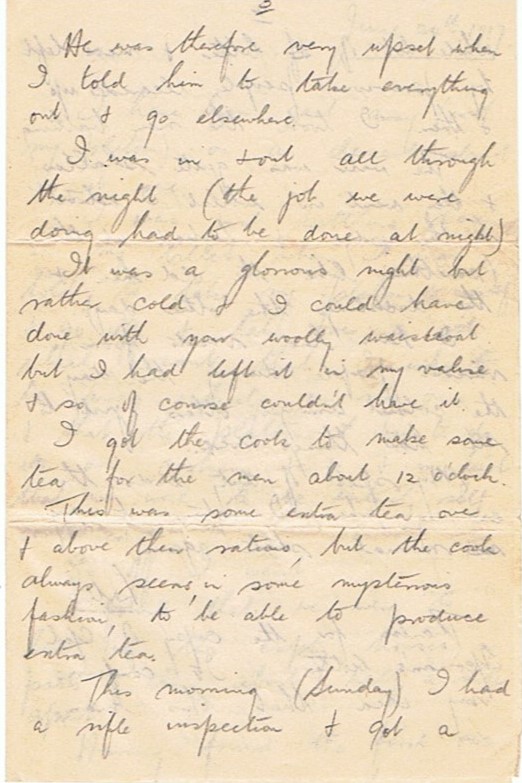 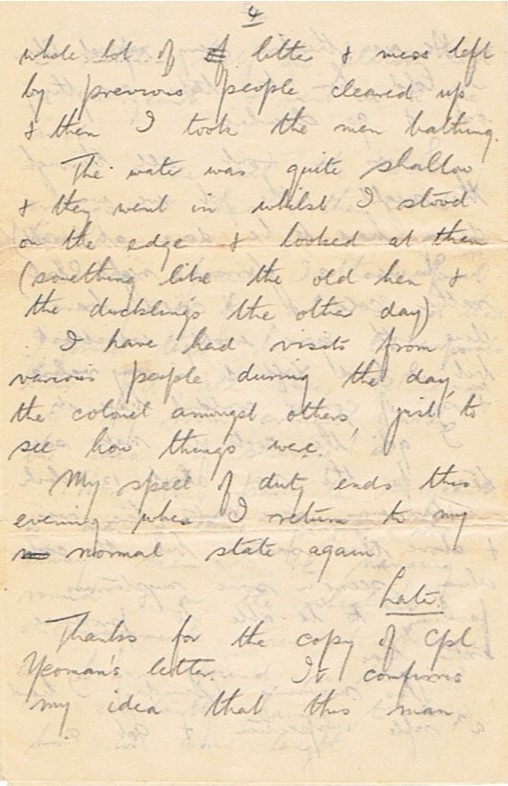 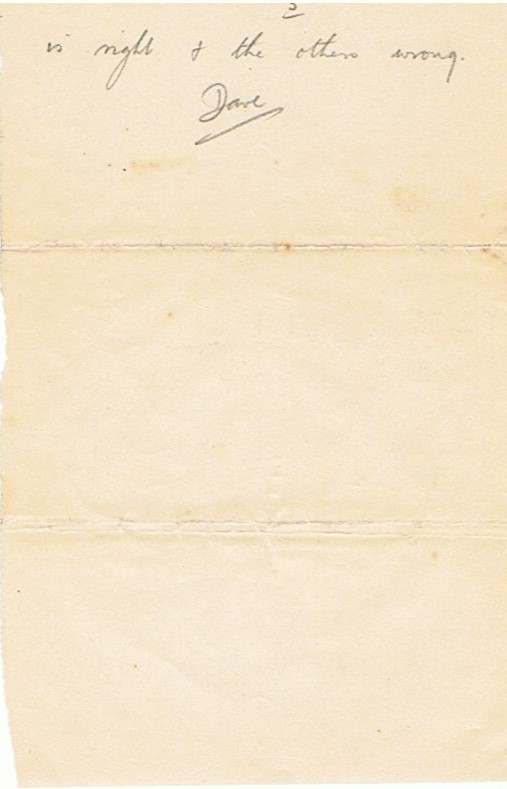 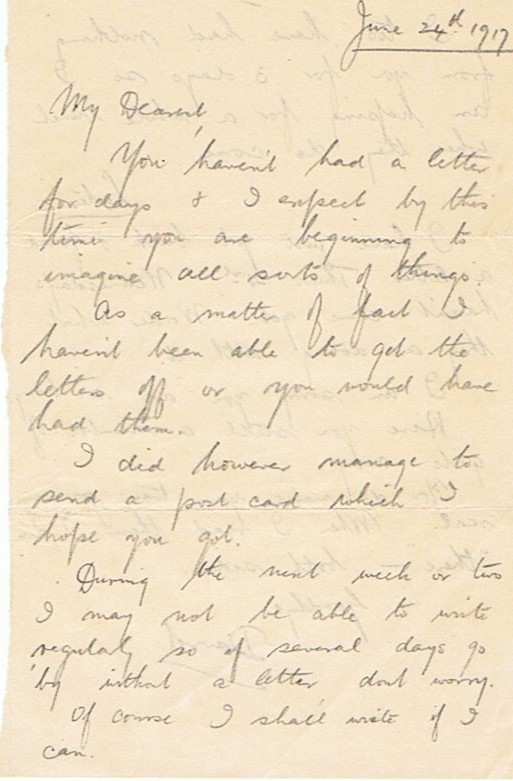 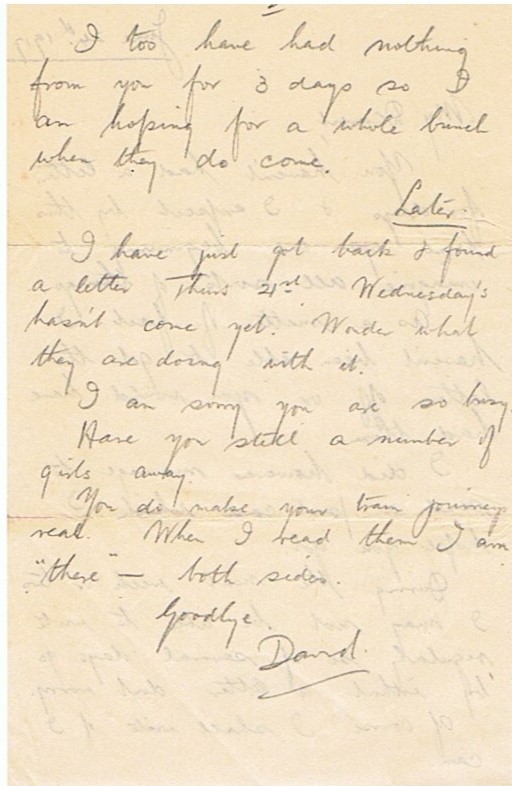 I have been cast away (with my platoon) on a desert island as it were.

I was just settling down in my billet when I was told to take my platoon and myself and go off and take over job which meant that I was to be away entirely on my own and that the platoon was to do its own cooking etc. etc. and in fact that we were to be entirely self contained,

So off I went.

I found that we were to live in two empty houses, or parts of them about half a mile apart. Having found the first one I settled half the platoon with a sergeant and went on to the next.

I made all the necessary arrangements here and then went back.

I am afraid I then upset the sergeant for when I got there I found that he and two corporals had put all their belongings into my room, evidently with the idea of sharing it.

Now this particular sergeant is one of those people who always seem to be hanging round and on the slightest encouragement tries to become a bosom friend, so that I am constantly having to keep him at arms length. He was therefore very upset when I told him to take everything out and go elsewhere.

I was in and out all through the night (the job we were doing had to be done at night). It was a glorious night but rather cold and I could have done with your woolly waistcoat but I had left it in my valise and so of course couldn’t have it.

I got the cook to make some tea for the men about 12 o’clock. This was some extra tea over and above their rations, but the cook always seems, in some mysterious fashion, to be able to produce extra tea.

This morning (Sunday) I had a rifle inspection and got a whole lot of litter and mess left by previous people cleared up and then I took the men bathing.

The water was quite shallow and they went in whilst I stood on the edge and looked at them (something like the old hen and the ducklings the other day).

I have had visits from various people during the day, the colonel amongst others, just to see how things were.

My spell of duty ends this evening when I return to my normal state again.

Thanks for the copy of Cpl Yeoman’s letter. It confirms my idea that this man is right and the others wrong.

You haven’t had a letter for days and I expect by this time you are beginning to imagine all sorts of things.

As a matter of fact I haven’t been able to get the letters off or you would have had them. I did however manage to send a post card which I hope you got.

During the next week or two I may not be able to write regularly so if several days go by without a letter, don’t worry. Of course I shall write if I can.

I too have had nothing from you for 3 days so I am hoping for a whole bunch when they do come.

I have just got back and found a letter Thurs 21st, Wednesday’s hasn’t come yet. Wonder what they are doing with it.

I am sorry you are so busy. Have you still a number of girls away.

You do make our train journeys real. When I read them I am “there” – both sides.