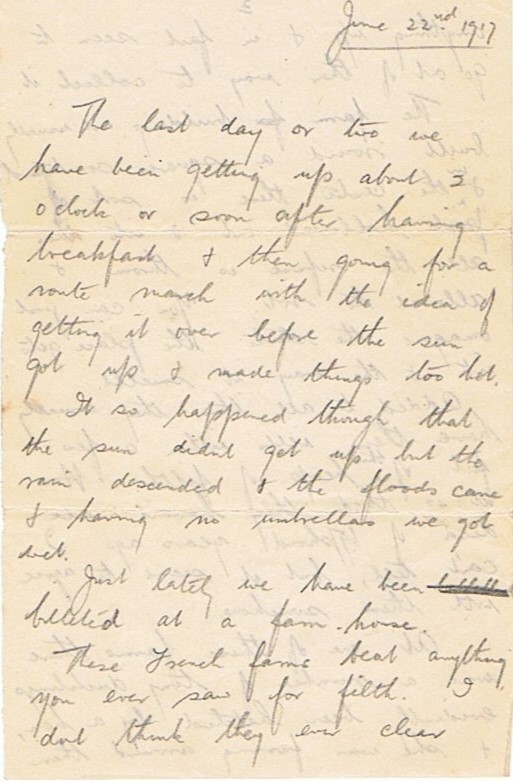 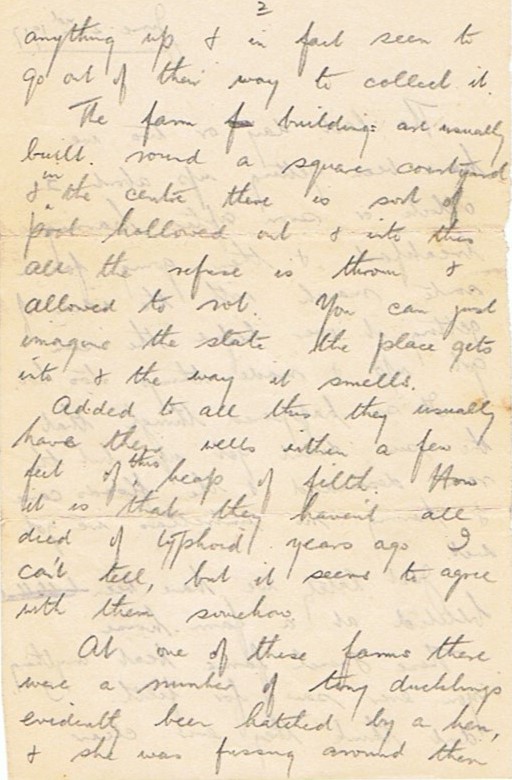 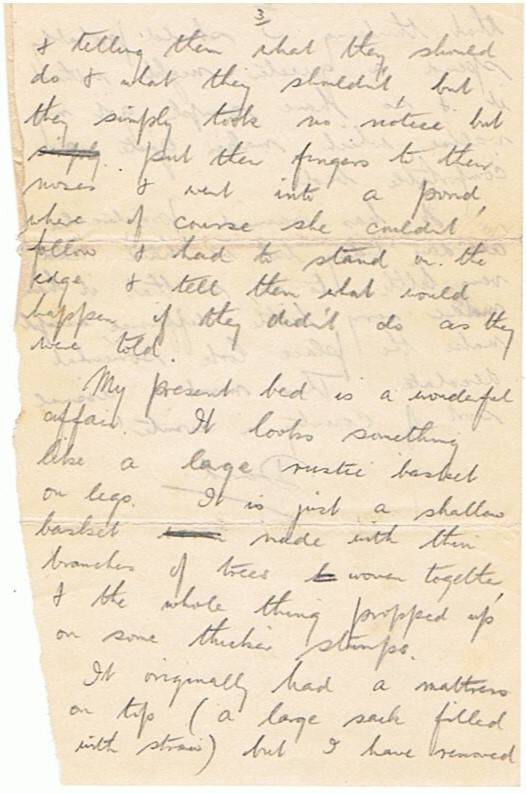 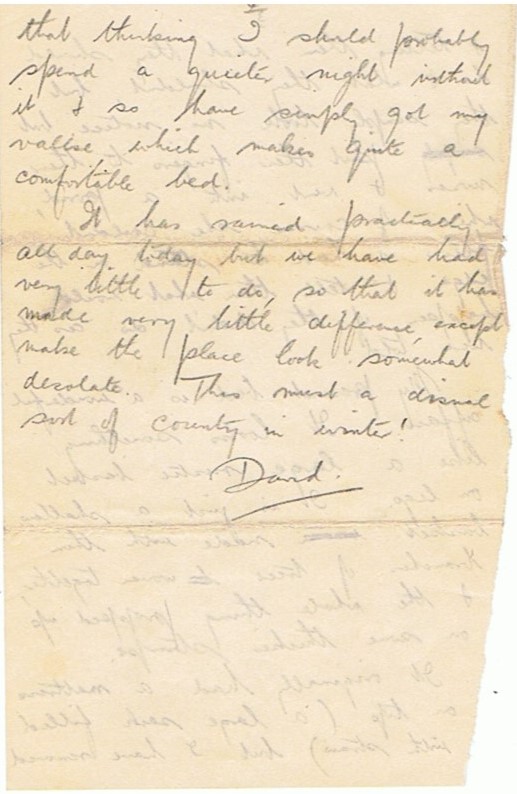 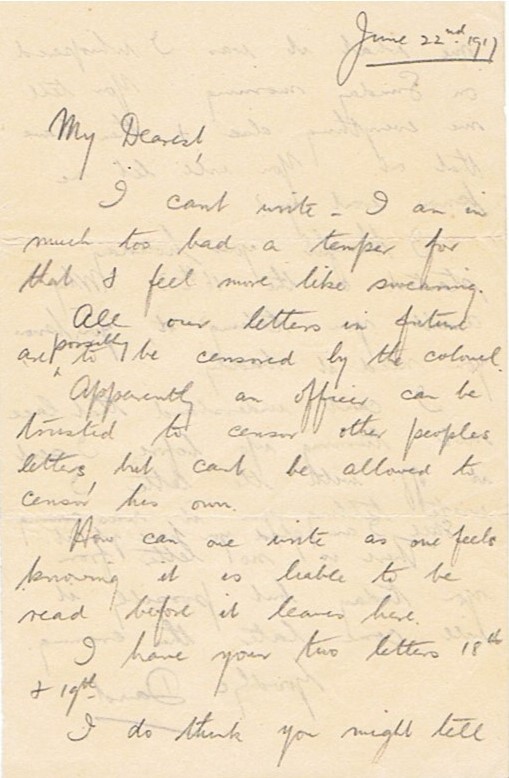 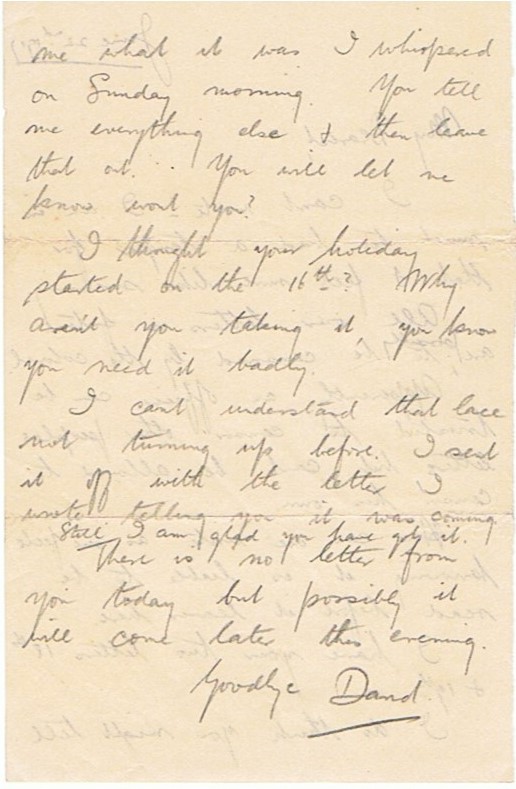 The last day or two we have been getting up about 2 o’clock or soon after having breakfast and then going for a route march with the idea of getting it over before the sun got up and made things too hot.

It so happened though that the sun didn’t get up but the rain descended and the floods came and having no umbrellas we got wet.

Just lately we have been billeted at a farmhouse. The French farms beat anything you ever saw for filth. I don’t think they ever clear anything up and in fact seem to go out of their way to collect it.

The farm buildings are usually built round a square courtyard and in the centre there is sort of a pool hollowed out and into this all the refuse is thrown and allowed to rot. You can just imagine the state the place gets into and the way it smells.

Added to all this they usually have their wells within a few feet of this heap of filth. How it is that they haven’t all died of typhoid years ago I can’t tell, but it seems to agree with them somehow.

At one of these farms there were a number of tiny ducklings evidently been hatched by a hen, and she was fussing around them and telling them what they should do arid what they shouldn’t, but they simply took no notice but put their fingers to their noses and went into a pond where of course she couldn’t follow and had to stand on the edge and tell them what would happen if they didn’t do as they were told.

My present bed is a wonderful affair. It looks something like a large rustic basket on legs. It is just a shallow basket made with thin branches of trees woven together and the whole thing propped up on some thicker stumps. It originally had a mattress on top (a large sack filled with straw) but I have removed that thinking I should probably spend a quieter night without it and so have simply got my valise which makes quite a comfortable bed.

It has rained practically all day today but we have had very little to do, so that it has made very little difference, except make the place look somewhat desolate. This must be a dismal sort of country in winter!

I can’t write – I am in much too bad a temper for that and I feel like swearing.

All our letters in future are possibly to be censored by the colonel.

Apparently an officer can be trusted to censor other people’s letters but can’t be allowed to censor his own.

How can one write as one feels knowing it is liable to be read before it leaves here.

I do think you might tell me what it was I whispered on Sunday morning. You tell me everything else and then leave that out. You will let me know won’t you?

I thought your holiday started on the 16th? Why aren’t you taking it, you know you need it badly.

I can’t understand that lace not turning up before. I sent it off with the letter I wrote telling you it was coming. Still I am glad you have got it.

There is no letter from you today but possibly it will come later this evening.