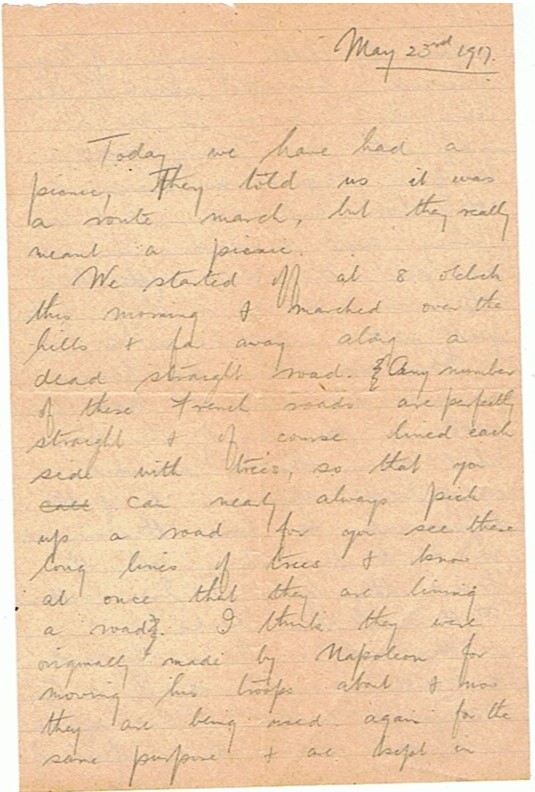 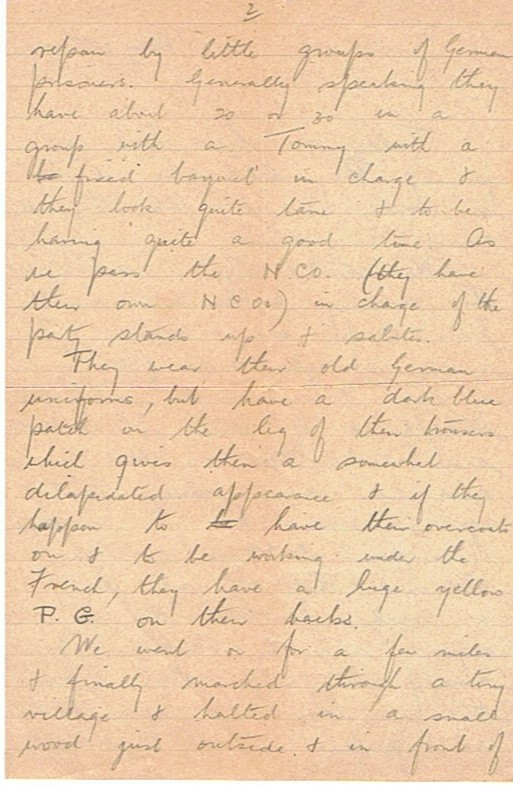 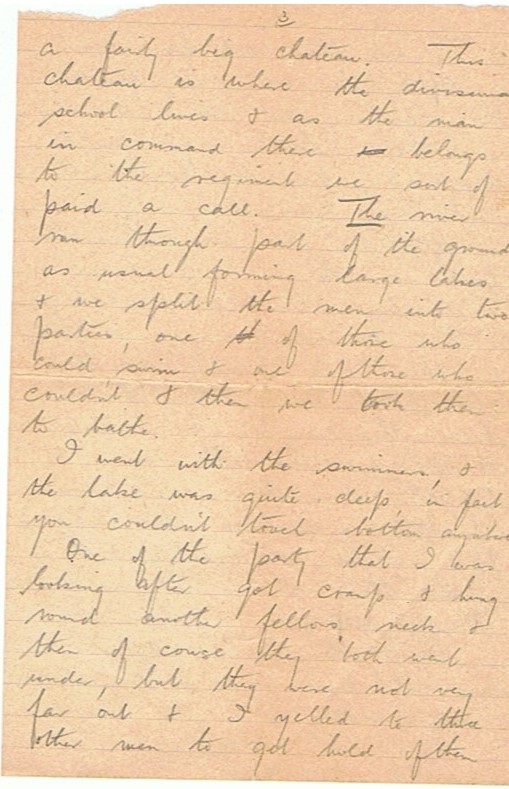 Today we have had a picnic, they told us it was a route march, but they really meant a picnic.

We started off at 8 o’clock this morning and marched over the hills and far away along a dead straight road. Any number of these French roads are perfectly straight and of course lined each side with trees, so that you can nearly always pick up a road for you see these long lines of trees and know at once that they are lining a road. I think they were originally made by Napoleon for moving his troops about and now they are being used again for the same purpose and are kept in repair by little groups of German prisoners. Generally speaking they have about 20 or 30 in a group with a Tommy with a fixed bayonet in charge and they look quite tame and to be having quite a good time. As we pass the NCO (they have their own NCO) in charge of the party stands up and salutes.

They wear their old German uniforms, but have a dark blue patch on the leg of their trousers which gives them a somewhat dilapidated appearance and if they happen to have their overcoats on and to be working under the French, they have a huge yellow P.G. on their backs.

We went on for a few miles and finally marched through a tiny village and halted in a small wood just outside and in front of a fairly big chateau. This chateau is where the divisional school lives and as the man in command there belongs to the regiment we sort of paid a call. The river ran through part of the grounds as usual forming large lakes and we split the men into two parties, one of those who could swim and one of those who couldn’t and then we took them to bathe.

I went with the swimmers, and the lake was quite deep, in fact you couldn’t touch bottom anywhere.

One of the party that I was looking after got cramp and hung round another fellow’s neck and then of course they both went under, but they were not very far out and I yelled to three other men to get hold of them and so got them out fairly easily.

After the men had finished, the officers had their swim. It was lovely – you simply dived in from the bank and the water was quite warm.

After that we took the men back to the wood for dinner. We had the cookers with us. These are really splendid things as they cook whilst on the move, so that when the men halt there is a hot meal ready for them at once.

After dinner we did some practice in getting the men’s gas masks on quickly and firing with them on and then marched back, getting in about 4,30.

Since then I have gone for a walk and am now sitting in a wood writing this.