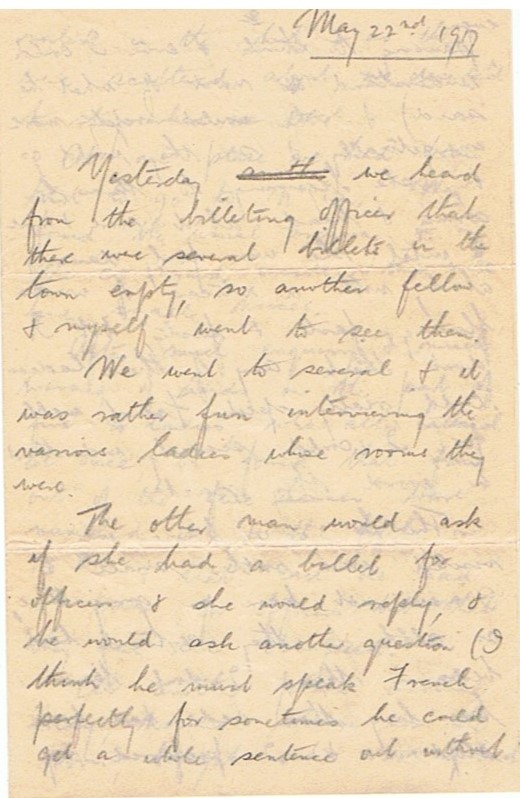 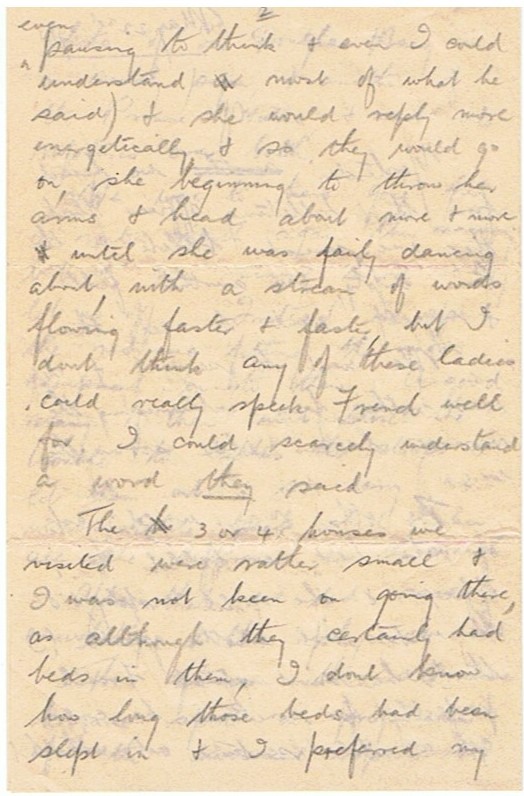 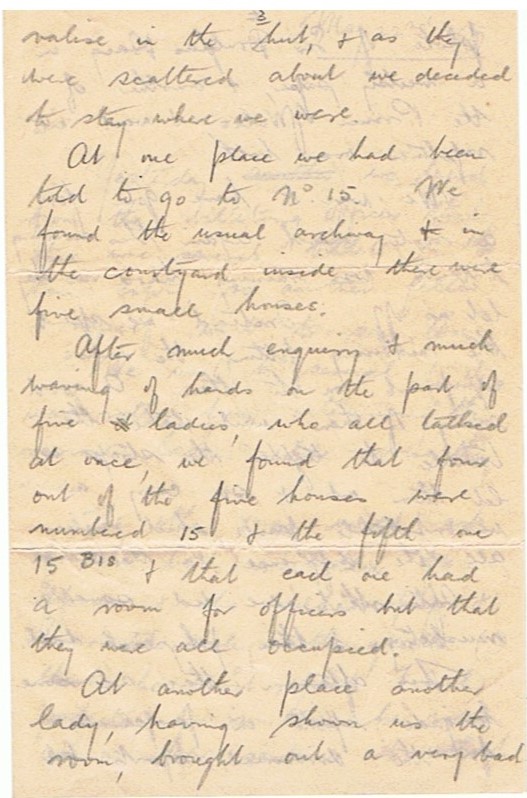 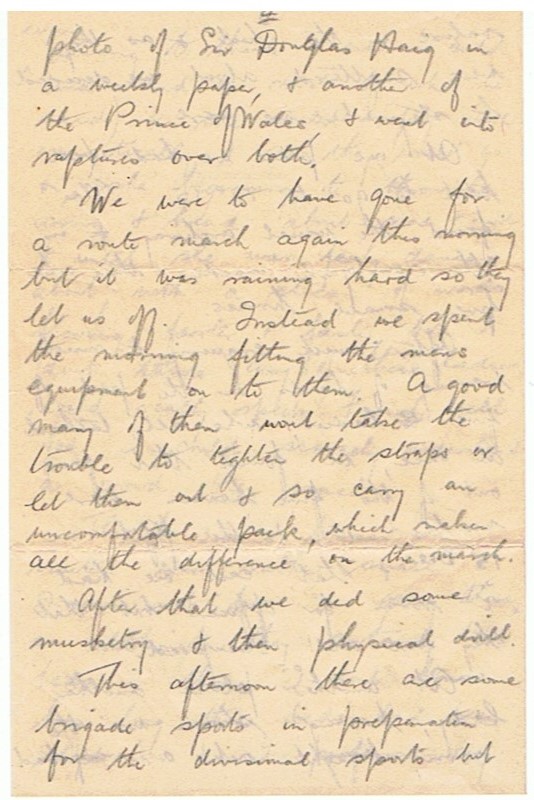 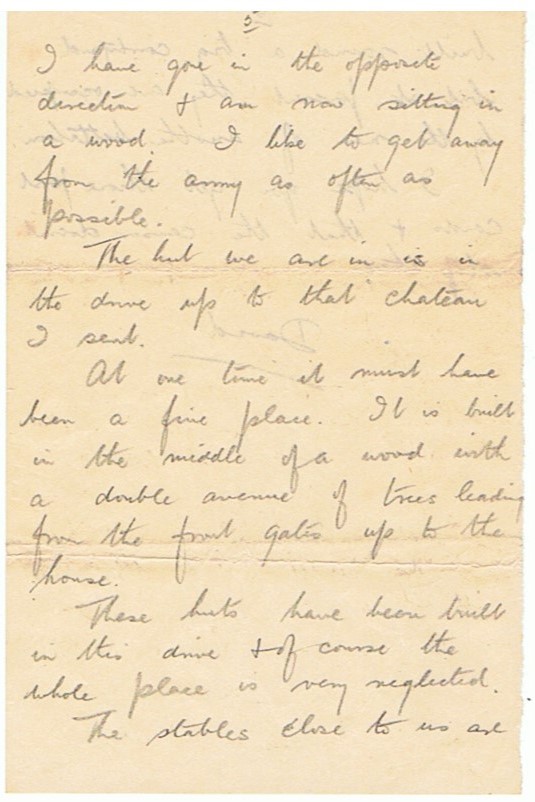 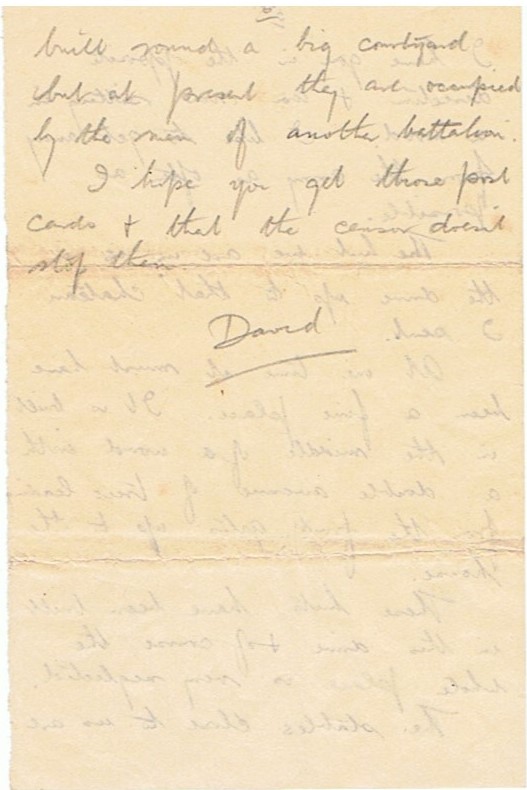 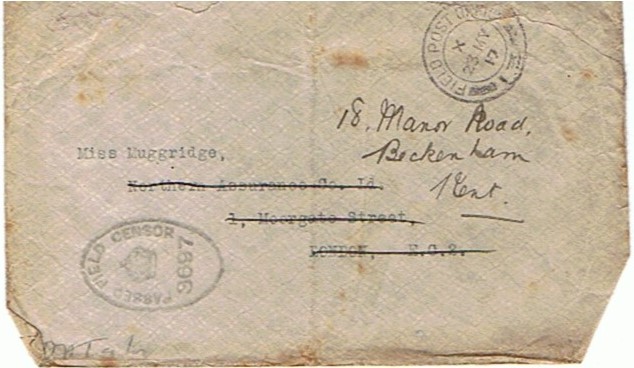 Yesterday we heard from the billeting officer that there were several billets in the town empty, so another fellow and myself went to see them.

We went to several and it was rather fun interviewing the various ladies whose rooms they were.

The other man would ask if she had a billet for officers and she would reply, and he would ask another question (I think he must speak French perfectly for sometimes he could get a whole sentence out without even pausing to think and even I could understand most of what he said) and she would reply more energetically and so they would go on, she beginning to throw her arms and head about more and more until she was fairly dancing about, with a stream of words flowing faster and faster, but I don’t think any of these ladies could really speak French well for I could scarcely understand a word they said.

The 3 or 4 houses we visited were rather small and I was not keen on going there, as although they certainly had beds in them, I don’t know how long those beds had been slept in and I preferred my valise in the hut, and as they were scattered about we decided to stay where we were.

At one place we had been told to go to No l5. We found the usual archway and in the courtyard inside there were five small houses. After much enquiry and much waving of hands on the part of five ladies, who all talked at once, we found that four out of the five houses were numbered 15 and the fifth one 15BIS and that each one had a room for officers but that they were all occupied.

At another place another lady, having shown us the room, brought out a very bad photo of Sir Douglas Haig in a weekly paper, and another of the Prince of Wales, and went into raptures over both.

We were to have gone for a route march again this morning but it was raining hard so they let us off. Instead we spent the morning fitting the men’s equipment on to them. A good many of them won’t take the trouble to tighten the straps or let them out and so carry an uncomfortable pack, which makes all the difference on the march.

After that we did some musketry and then physical drill.

This afternoon there are some brigade sports in preparation for the divisional sports but I have gone in the opposite direction and am now sitting in a wood. I like to get away from the army as often as possible.

The hut we are in is in the drive up to that chateau I sent. At one time it must have been a fine place. It is built in the middle of a wood with a double avenue of trees leading from the front gates up to the house. These huts have been built in this drive and of course the whole place is very neglected.

The stables close to us are built round a big courtyard but at present they are occupied by the men of another battalion.

I hope you get those postcards and that the censor doesn’t stop them.