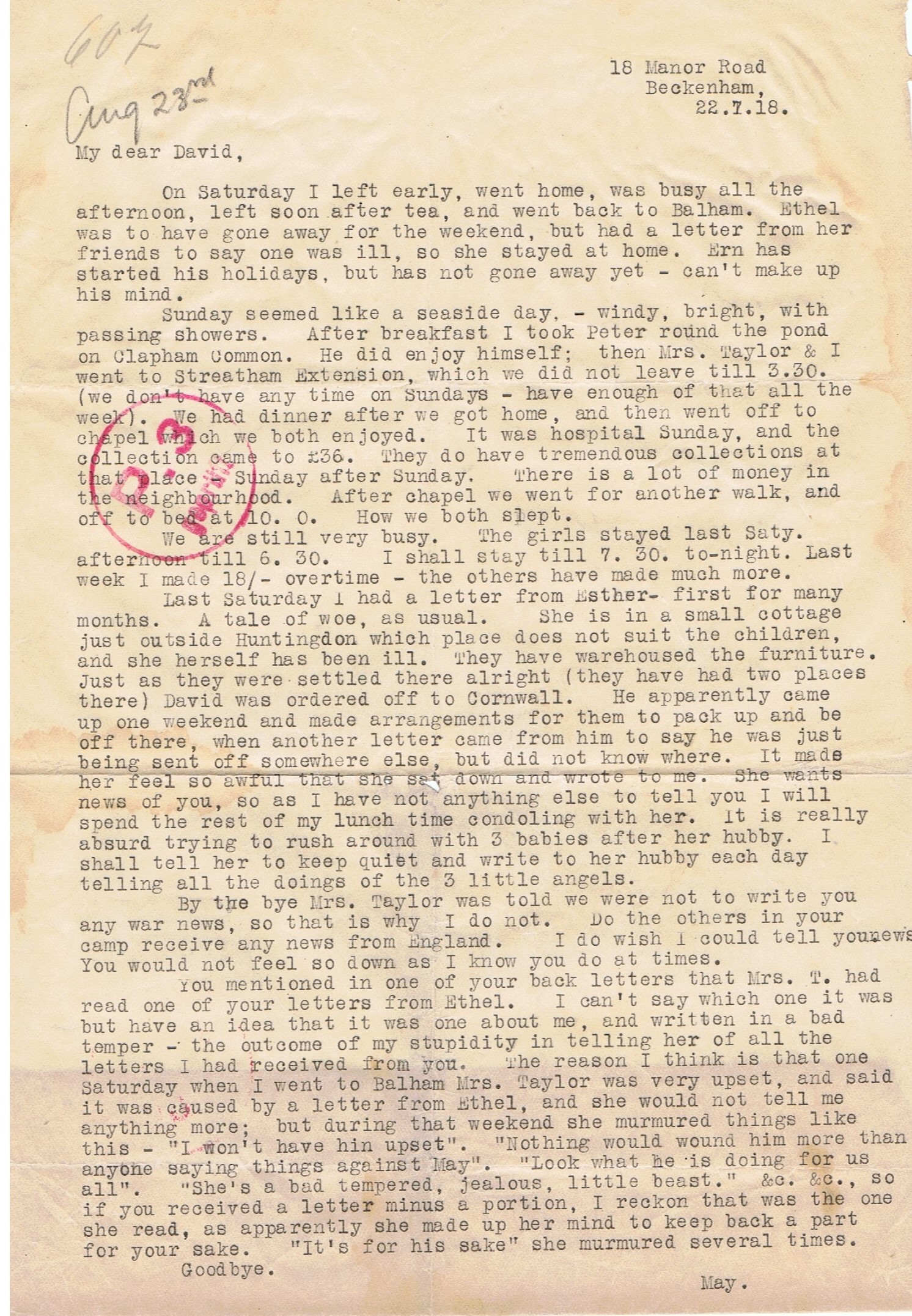 May to David Beckenham 22.7.18
My dear David,
On Saturday I left early, went home, was busy all the afternoon, left soon after tea, and went back to Balham. Ethel was to have gone away for the weekend, but had a letter from her friends to say one was ill, so she stayed at home. Ern has started his holidays, but has not gone away yet – can’t make up his mind.
Sunday seemed like a seaside day, – windy, bright, with passing showers. After breakfast I took Peter round the pond on Clapham Common. He did enjoy himself; then Mrs Taylor & I went to Streatham Extension, which we did not leave till 3.30. (we don’t have any time on Sundays – have enough of that all the week). We had dinner after we got home, and then went off to chapel which we both enjoyed. It was hospital Sunday, and the collection came to £36. They do have tremendous collections at that place – Sunday after Sunday. There is a lot of money in the neighbourhood. After chapel we went for another walk, and off to bed at 10.0. How we both slept.
We are still very busy. The girls stayed last Saty afternoon till 6.30. I shall stay till 7.30 to-night. Last week I made 18/- overtime – the others have made much more.
Last Saturday I had a letter from Esther – first for many months. A tale of woe as usual. She is in a small cottage just outside Huntingdon which place does not suit the children, and she herself has been ill. They have warehoused the furniture. Just as they were settled there alright (they have had two places there) David was ordered off to Cornwall. He apparently came up one weekend and made arrangements for them to pack up and be off there, when another letter came from him to say he was just being sent off somewhere else, but did not know where. It made her feel so awful that she sat down and wrote to me. She wants news of you, so as I have not anything else to tell you I will spend the rest of my lunch time condoling with her. It is really absurd trying to rush around with 3 babies after her hubby. I shall tell her to keep quiet and write to her hubby each day telling all the doings of the 3 little angels.
By the bye, Mrs Taylor was told we were not to write you any war news, so that is why I do not. Do the others in your camp receive any news from England. I do wish I could tell you news. You would not feel so down as I know you do at times.
You mentioned in one of your back letters that Mrs T had read one of your letters from Ethel. I can’t say which one it was but I have an idea that it was one about me, and written in a bad temper – the outcome of my stupidity in telling her of all the letters I had received from you. The reason I think is that one Saturday when I went to Balham Mrs Taylor was very upset, and said it was caused by a letter from Ethel, and she would not tell me anything more; but during that weekend she murmured things like this = “I won’t have him upset”. “Nothing would wound him more than anyone saying things against May”. “Look at what he is doing for us all”. “She’s a bad tempered, jealous, little beast.” Etc etc, so if you receive a letter minus a portion, I reckon that was the one she read, as apparently she made up her mind to keep back a part for your sake. “It’s for his sake” she murmured several times.
Goodbye.
May