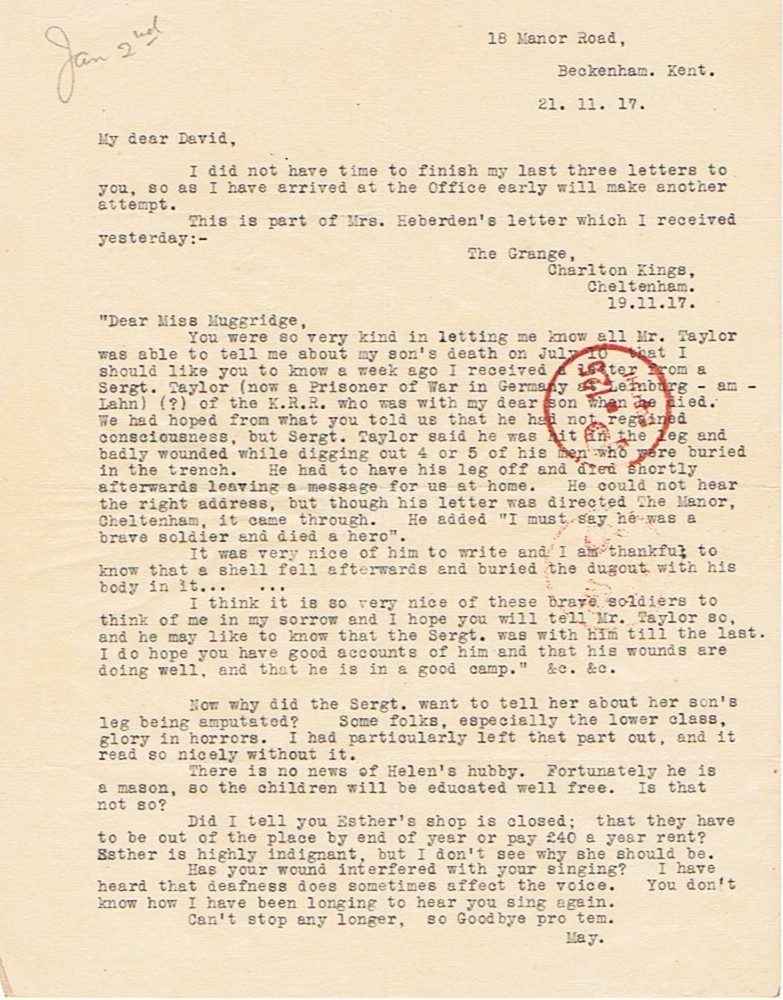 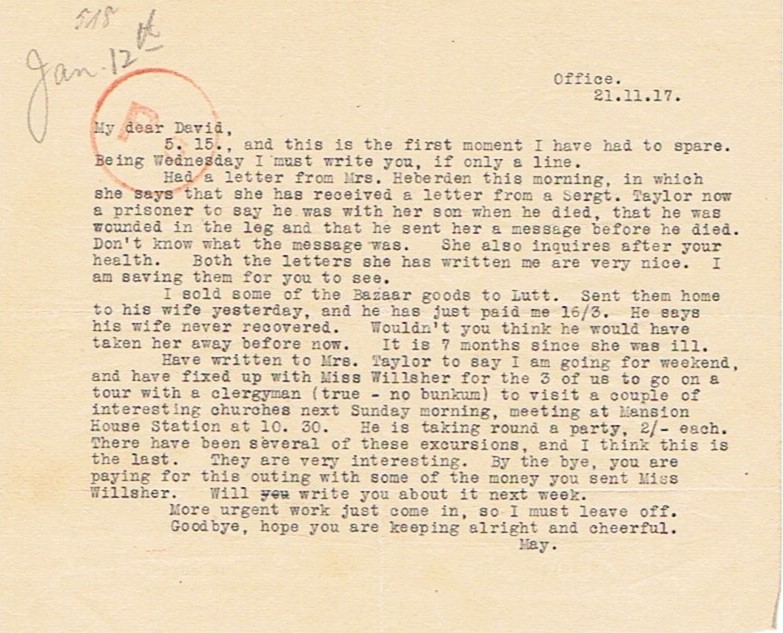 I did not have time to finish my last three letters to you, so as I have arrived at the office early will make another attempt.

This is part of Mrs Heberden’s letter which I received yesterday:-

“Dear Miss Muggridge,
You were so very kind in letting me know all Mr Taylor was able to tell me about my son’s death on July 10 that I should like you to know a week ago I received a letter from a Sergt. Taylor (now a prisoner of War in Germany at Leinburg-am-Lahn) (?) K.R.R. who was with my dear son when he died. We had hoped from what you told us that he had not regained consciousness, but Sergt. Taylor said he was hit in the leg and badly wounded while digging out 4 or 5 of his men who were buried in the trench. He had to have his leg off and died shortly afterwards leaving a message for us at home. He could not hear the right address, but though his letter was directed The Manor, Cheltenham, it came through. He added “I must say he was a brave soldier and died a hero”.
It was very nice of him to write and I am thankful to know that a shell fell afterwards and buried the dugout with his body in it…  …
I think it is so very nice of these brave soldiers to think of me in my sorrow and I hope you will tell Mr Taylor so, and he may like to know that the Sergt. was with him to the very last. I do hope you have good accounts of him and that his wounds are doing well, and that he is in a good camp.” Etc etc.

Now why did the Sergt. want to tell her about her son’s leg being amputated? Some folks, especially the lower class, glory in horrors. I had particularly left that part out, and it read so nicely without it.

There is no news of Helen’s hubby. Fortunately he is a mason, so the children will be educated well free. Is that not so?

Did I tell you Esther’s shop is closed; that they have to be out of the place by end of year or pay £40 a year rent? Esther is highly indignant, but I don’t see why she should be.

Has your wound interfered with your singing? I have heard that deafness sometimes affect the voice. You don’t know how I have been longing to hear you sing again.

5.15, and this is the first moment I have had to spare. Being Wednesday I must write to you, if only a line.

Had a letter from Mrs Heberden this morning, in which she says that she has received a letter from a Sergt. Taylor now a prisoner to say he was wither her son when he died, that he was wounded in the leg and that he sent her a message before he died. Don’t know what the message was. She also inquires after your health. Both the letters she has written me are very nice. I am saving them for you to see.

I sold some of the bazaar good to Lutt. Sent them home to his wife yesterday, and he has just paid me 16/3. He says his wife never recovered. Wouldn’t you think he would have taken her away before now. It is 7 months since she was ill.

Have written to Mrs Taylor to say I am going for weekend, and have fixed up with Miss Willsher for the 3 of us to go on a tour with a clergyman (true – no bunkum) to visit a couple of interesting churches next Sunday morning, meeting at Mansion House Station at 10.30. He is taking round a party, 2/- each. There have been several of these excursions, and I think this is the last. They are very interesting. By the bye, you are paying for this outing with some of the money you sent Miss Willsher. Will write you about it next week.

More urgent work just come in, so I must leave off.

Goodbye, hope you are keeping alright and cheerful.